Amritsar Sahib: On the intervention of the ‘acting’ Jathedars to resolve the rift between the Shiromani Akali Dal (Amritsar) and United Akali Dal, the two main parties who are said to have organised the ‘Panthic Gathering’ of 2015 on Sunday mutually resolved their differences and pledged to act unitedly. 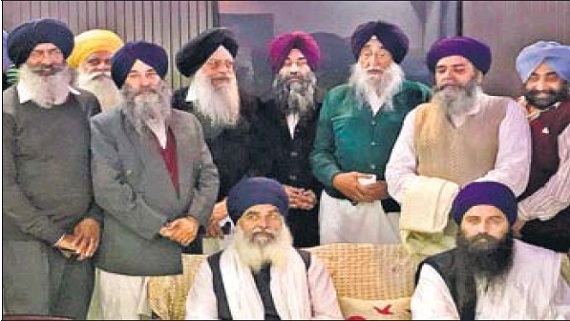 The quarrel between the aforementioned parties came in open when last week ‘acting Jatherdar of Takhat Shri Keshgarh Sahib Amrik Singh Ajnala through a press conference ammounced his resignation from the post. It was since then the ‘acting’ Jathedars appointed at 2015 “Panthic Gathering” were running pillar to post to get the differences resolved at the earliest.

It was in this backdrop that ‘acting’  Jathedar of Akal Takht Dhian Singh Mand and Takht Damdama Sahib ‘Jathedar’ Baljit Singh Daduwal reportedly called a meeting on Sunday.

As per the media reports SAD (Amritsar) leaders, including its president Simranjit Singh Mann, general secretaries Jaskaran Singh Kahan Singh Wala and Jarnail Singh Sakhira, UAD president Mohkam Singh and general secretary Gurdeep Singh Bathinda attended the meeting. The meeting, which started at around 3.30 pm at Sakhira’s residence in a hush-hush manner, went on till 8.30 pm.

“Both parties have resolved to bury their differences and work unitedly as earlier,”Jarnail Singh Sakhira said after the meeting.

Furthermore, its is said by the media sources that SAD (A) leaders were unhappy with the UAD leaders as the latter did not support them and ‘acting’ Jathedars during the Gurdaspur Lok Sabha bypoll. It is further claimed that Simranjit Singh Mann had dubbed Baljeet Singh Daduwal as an ally of the Congress.

Meanwhile, Dhyan Singh Mand who reportedly presided over the meeting, convinced both the parties that they appointed him and others as ‘acting’ Jathedars during the ‘Panthic Gathering’ and their mutual relations must be normal. However, the differences took five hours to be resolved.