London : The Indian authorities having failed to pressure the UK authorities to deny permission for the London Declaration Referendum 2020 event organised by Sikhs For Justice tried to get pro-India groups to stage a counter-protest.

It had been claimed that pro-India groups planned to hold a pre-Independence Day celebration in Trafalgar Square on 12 August 2018 and circulated fake posters on social media to this effect. However, the groups had not applied for permission from the Greater London Authority to use Trafalgar Square. 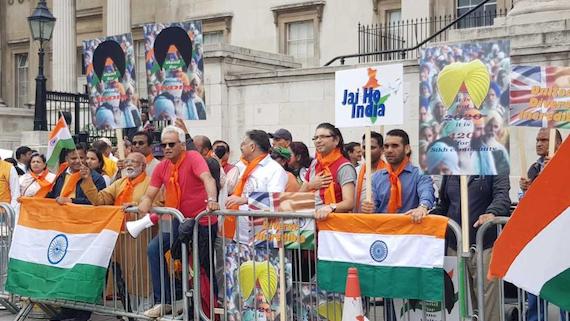 The reality is pro-India groups linked to Narendra Modi wished to stage a counter-protest to try and cause a disturbance and disrupt the Sikh event in Trafalgar Square to promote the Sikhs’ right of self determination that had been planned for several months. The Indian media reported pro-India groups would have 3,000 people of Indian origin protesting.

However, in practice only around 100 pro-India protesters took part in the demonstration outside the National Gallery and some appeared to have been hired for the occasion bringing drums. They held placards, including some with images of Narendra Modi, waved Indian flags and shouted various pro-India slogans and proved to be no more than a nuisance. 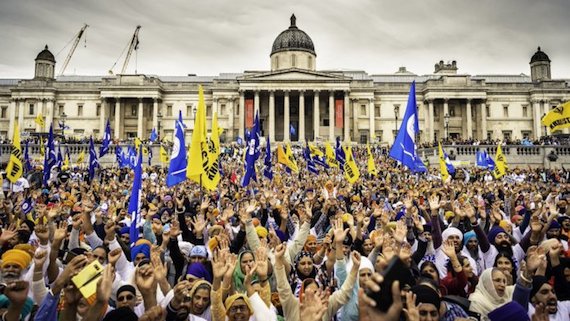 The pro-India groups, including members of the Overseas Friends of the BJP, accused Britain of having a “hidden agenda” of supporting Khalistan. What caused Sikhs present or those watching on TV particular offence were posters with the image of a large turban with the words “it is not 2020 it is 420 for Sikh community”. The term “420” is used in India to refer to a confidence trickster and is referenced to Section 420 of the Indian Penal Code that deals with cheating and dishonesty.

The offence too place in the presence of police officers therefore the Sikh Federation (UK) has formally reported the organisers of the pro-India counter protest to the Metropolitan Police. The organisers have been accused of producing placards spreading hate and hostility directed at the Sikh community.

A hate crime is a criminal offence and is taken seriously by the police, especially when it could have resulted in public disorder with thousands of Sikhs present in Trafalgar Square. The pro-India protesters that produced the offensive placards could face arrest and prosecution.