Rally on Punjab Day to Highlight the Treatment of Punjab as a Colony by India: Dal Khalsa

Amritsar: The Dal Khalsa has decided to organize a rally and march in Amritsar on Punjab Day to highlight how New Delhi through black laws is treating Punjab as its colony, encroaching on state’s rights, ruining youth’s lives, looting states river waters in violation of riparian principles beside farmers distress.

The organization will take out ‘mashaal march’ in the evening to observe 36th anniversary of the genocidal attack on innocent Sikhs in Delhi. The decision was taken in the party meet held under the president ship of Harpal Singh Cheema. 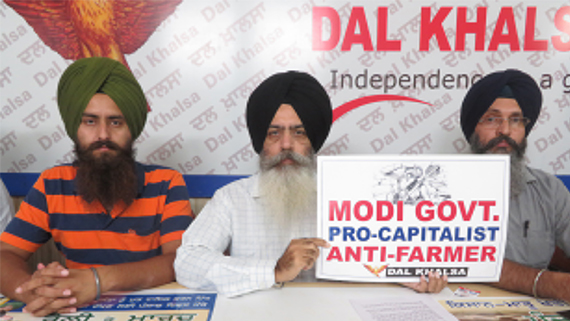 Addressing the press conference at party office, spokesman Kanwar Pal Singh said the proposed function is an attempt to demonstrate their aspirations to regain Punjab’s Sovereignty, He said the representatives of like-minded organizations will also join the march scheduled for November 1.

He said their activists will take out a march with Mashaal’s (torch) in their hands to remember the victims of the state sponsored Delhi massacre in Nov 1984. He said except Sajjan Kumar, all perpetrators of the Delhi massacre have gone scot-free. He rues that even the UN and world powers have failed the aggrieved Sikh community by not making India accountable for inhuman crimes.

Extending full support to on-going famer’s agitation against contentious farm laws, party general secretary Paramjit Singh Tanda said Punjab is united in rejecting these laws that would ruin the economy of Punjab and livelihoods of farmers, Referring to three bills passed by Punjab assembly, he said going by the past record, they are likely to be hit by legal barriers and constitutional legalities. He said the Punjab Termination of Agreements Act (PTAA) 2004 passed by Punjab assembly has met the same fate. Dal Khalsa leader was clear that to pressurize the Union govt to scrap the laws, the people will have to fight on streets with more zeal. This fight is going to be prolonged given the adamant and arrogant attitude of the Narendra Modi government.

Taking a dig at Sukhbir Singh Badal for promising to reject these laws in case his party comes to power in 2022, SYP head Paramjit Singh Mand said people hardly believe in Badal’s words. He reminded how Badal’s forgot their promise to scrap section 5 of PTAA once they returned to power in 2007. He, however, said it’s unfortunate that leaders of all political parties were engaged in unhealthy competition to prove them more pro-farmer than others.