In a press statement issued after the meeting, it was said that the letter issued by Bhai Jagtar Singh Hawara was not inline with Sikh values and principles. 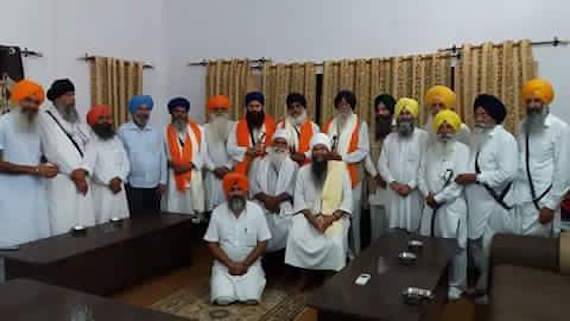 It may be recalled there thatNotably, Bhai Jagtar Singh Hawara in his letter released through his council Advocate Jagtar Singh Hawara had urged Bhai Satnam Singh Khandewala and other former ‘Panj Pyare’ of Akal Takht Sahib to take steps for Panthic unity to ensure participation of all concerned sections of the Sikh panth in Sarbat Khalsa. Bhai Hawara had suggested Bhai Satnam Singh Khandewala and other four Singhs to lead the upcoming Panthic gathering under the patronage of acting Jathdears appointed during 10 Nov. 2015 Panthic gathering.

A statement issued after yesterday’s meeting reads: “Jathedar Jagtar Singh Hawara asked that November 10, 2016 Sarbat Khalsa would be held under supervision of Panj Singhs, namely Major Singh, Satnam Singh Khanda, Satnam Singh Khalsa, Mangal Singh and Tarlok Singh. This is not in accordance to Sikh values as Punj Pyare title was only given to Bhai Daya Singh, Bhai Dharam Singh, Bhai Mohkam Singh, Bhai Sahib Singh and Bhai Himmat Singh by Guru Gobind Singh Ji. Five Singhs who do Sewa at Amrit Sanchar or other religious events are only Panj Pyare for that time being. They cannot be considered Panj Pyare afterwards” (translated from Punjabi to English).