Nakodar, Punjab: Portraits of Sikh martyrs of ‘Saka Nakkdar’ of 1986 were installed at at the historic Stockton Gurdwara Sahib in California, USA.

Family members of these martyrs say that while whole of the Sikh Panth bestowed these Shaheeds with  high respect and are seen with high regards on the other hand the family members of the shaheed are running pillar to post to get the portraits of all the four martyrs installed at Central Sikh Museum (Amritsar). Both the Jathedar and the SGPC President have failed them miserably. 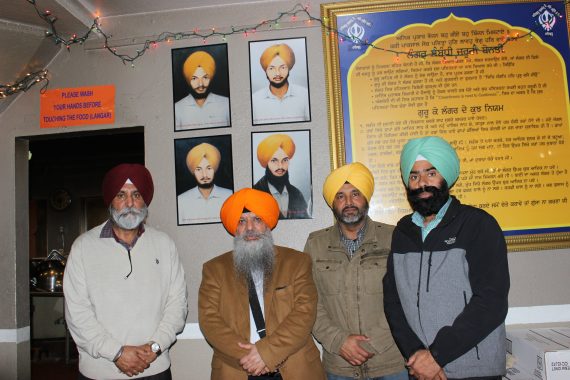 Now the family members of the martyrs has taken up the task to get the portraits installed in the Gurudawars Sahibs across North America, as it may wake up the SGPC to its duties and responsibility towards the Sikh martyrs.

On Sunday the portraits of all the four martyrs were installed with the co-operation of the local Sikh Sangat of California at the historic Stockton Gurdwara Sahib. Dr Amarjit Singh from Washington DC and literature personality Prof Niranjan Singh Dhindhsa were also present at the event.

The Sangat present at the event made a collective demand that the portraits of the Sikh martyrs should be installed at the Central Sikh Museum (Amritsar) before the anniversary of the event.