Seattle, US: On 3 February 2020, the City of Seattle became the first in the U.S. to adopt a resolution denouncing India’s contentious Citizenship Amendment Act and proposed National Register of Citizens. The resolution was moved by Councilmember Sawant.

Speaking during the City House, Councilmember Sawant said: “Before the concentration camps and the death camps, the Nazis enacted the Nuremberg Laws including the Reich Citizenship Law, which redefined German citizenship to exclude Jewish people. The result was the isolation of Jewish communities, making them an increasingly easy target for scapegoating. The CAA and NRC have ominous echoes”. 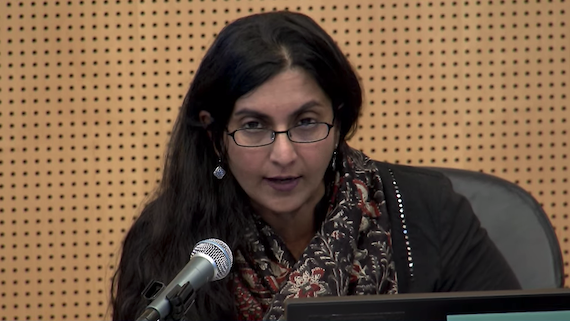 “By approving this resolution, the Seattle City Council will show that the city’s legislative body will stand with the widespread protest movement, courageously facing brutal police repression throughout the country against the National Register of Citizens (the NRC) and the Citizenship Amendment Act (the CAA), which in tandem with each other, threaten to strip away the basic rights of hundreds of millions of people”, she said in her address the house before actual adoption of the resolution.

“By approving this resolution, the City Council will go on the record opposing religious persecution and Islamophobia, the discrimination, scapegoating, and oppression of Muslims, poor people, and marginalized communities, by the Hindu fundamentalist regime of the Bharatiya Janata Party (the BJP) and Prime Minister Narendra Modi“, said she.

“By approving this resolution, the City Council will draw a historic line in the sand, recognizing the ominous similarities between the NRC And the CAA, and the early Nuremberg laws enacted by the Third Reich in 1930s Germany.  Recognizing the credible news reports that the Modi regime has already put many people in the state of Assam in detention centers, and that new detention centers and prisons are being built as we speak”, she added.

Councilmember Sawant also quoted a statement from the Board of Directors of the Kadima Reconstructionist Jewish Community supporting the Seattle City Council resolution regarding CAA and NRC. The quote she used in her speech reads: “Within living memory, policies closely parallel to these were among the first steps taken by the Nazi government of Germany in the 1930s and are now recognizable as initial steps to the Holocaust. Policies such as these were central elements in centuries of systematic oppression of Jews, especially in Europe.”

LISTEN TO SPEECH OF COUNCILMEMBER SAWANT:

Seattle City Council is believed to be the first legislative body in the United States to take a stance on the CAA and NRC, which have resulted in mass protests and strike actions throughout India since the CAA passed in December 2019.

Sawant’s resolution explains that Indian Prime Minister Narendra Modi’s “right-wing government published an updated NRC, requiring nearly two million people in the northeastern state of Assam to prove with documentary evidence their Indian citizenship or face detention at mass prisons and detention camps that the Indian government has begun to build and fill.”

The resolution further explains that together, the NRC and CAA threaten to strip hundreds of millions of Muslim people, poor people, and marginalized communities of their Indian Citizenship and all democratic rights, and placing large numbers in detention camps and prisons, as already seen in the state of Assam.

“The National Register of Citizens and the Citizenship Amendment Act by the BJP and Modi regime bear frightening similarities to the early Nuremberg laws of the Third Reich in 1930’s Germany,” said Councilmember Sawant.

“Progressives in America fighting against Trump’s bigoted, Islamophobic, and anti-immigrant agenda need to be linked with the global fightback against the far right,” continued Sawant. “This resolution is in solidarity with the courageous youth protests in India, and with the 250 million workers and farmers who walked out on January 8 in the largest-ever one-day general strike in global history, to protest not only the dangerous anti-Muslim and anti-Dalit policies of the far-right BJP government, but also the economic devastation wrought by intensified corruption, rampant privatization and neoliberal policies, and unprecedented inequality.”

“We welcome the Seattle City Council’s resolution denouncing the divisive and draconian CAA and NRC. These acts are unconstitutional and designed to disenfranchise several million Muslim, Dalits and other minorities in order to create a fascist state.” said Javed Sikander, spokesperson for the Seattle chapter of the Indian American Muslim Council (IAMC).

“Seattle is leading the moral consensus in the global outcry against the CAA. When genocidal campaigns begin, one important intervention is international condemnation, and the Seattle community feels a deep sense of solidarity with their electeds, as the time to stand against the Indian government’s Islamophobic policies is now,” said Thenmozhi Soundarajan, Executive Director of Equality Labs. “These genocidal projects happen in the shadows and this resolution highlights the significance of Seattle City Council standing up for South Asian minorities, Muslims, and caste oppressed communities.”

“As South Asians in Seattle, SABAH confirms that the CAA is not an internal issue to India, and that Seattle must take a stand against it,” said Veena Roy of SABAH. “There are thousands here in Seattle who are intimately connected to the minority experience in India, some have needed to migrate here after similar violence in the past, and many who have family in India who directly experience the violence that the Indian government clamors to keep hidden. We know that Kshama Sawant’s resolution is much more than a symbolic gesture. It has created ripples in the Greater Seattle Area, even in India. As a community of Seattle, a sanctuary city that fights for equality and safety for the undocumented, we applaud the passing of this resolution.”

“Within living memory, policies closely parallel to [the NRC and CAA] were among the first steps taken by the Nazi government of Germany in the 1930s and are now recognizable as initial steps to the Holocaust,” stated a February 3 resolution by the Board of Directors of Kadima Reconstructionist Jewish Community. “Policies such as these were central elements in centuries of systematic oppression of Jews, especially in Europe.”