Amritsar/ Patiala: The Shiromani Gurdwara Prabhandak Committee (SGPC) was left red-faced yesterday after the producer of controversial film Nanak Shah Fakir refused to attend a meeting arrange by the SGPC. A report in the Hindustan Times (HT) notes that Harinder Sikka has also refused to halt the release of the controversial film that is being widely opposed by the Sikh panth. The movie attempts to personify Guru Nanak Ji and thus violates the basic tenets of the Sikhi as personification of Sikh Gurus is strictly prohibited in the Sikh tradition. 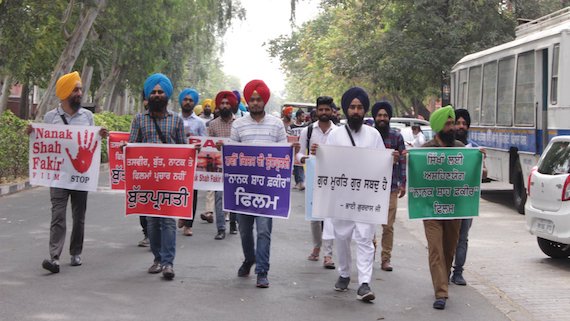 The producer had earlier released the film in 2015 but it was withdrawn in wake of strong opposition from the Sikh panth. The producer had managed to get support letter from former SGPC chief secretary Harcharan Singh, who had remained a controversial figure during his entire tenure in the SGPC. He had announced to release the film with the support and ‘blessings’ of the SGPC and even the SGPC was supporting the film. The SGPC’s move was strongly criticised by the Sikhs after which it withdrew its support. Two days back, the SGPC had announced to form another sub-committee to review the film but according to media reports, Harinder Sikka refused to attend the meeting saying that it was too late to reconsider the release of the movie.

“Do you know how much loss a person has to bear?”, Harinder Sikka reportedly told Hindustan Times (HT), adding that “what will happen to those who are associated with this film for business? I am not alone in deciding whether or not to release the movie”.

PROTESTS MARK OPPOSITION TO RELEASE OF THE CONTROVERSIAL FILM: 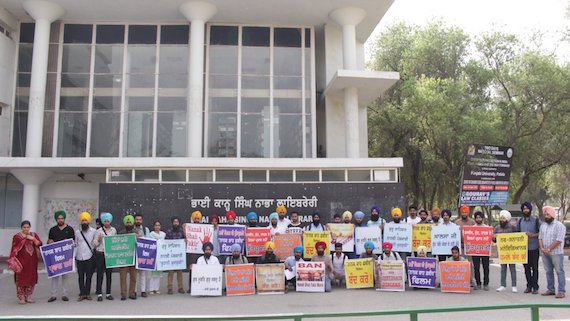 Another view of protest held at Punjabi University, Patiala

Patiala: Meanwhile, students of various education institutions of Punjab, as well as various Sikh groups, have announced to oppose the movie. Students and research scholars of Punjabi University, Patiala yesterday (April 6) held a demonstration against release of the movie. The students said that the “evil” attempt of personification of Sikh Guru Sahib must be stopped.