“The Hindu nationalist Bharatiya Janata Party (BJP)-led government in December 2019 adopted the Citizenship Amendment Act, which for the first time makes religion a basis for citizenship. The act, together with a planned nationwide verification process to identify “illegal migrants,” can threaten the citizenship rights of millions of Indian Muslims”, reads a statement by HRW.

The 82-page report, “‘Shoot the Traitors’: Discrimination Against Muslims Under India’s New Citizenship Policy,” says the police and other officials have repeatedly failed to intervene when government supporters attacked those protesting the new citizenship policies. The police, however, have been quick to arrest critics of the policy and disperse their peaceful demonstrations, including by using excessive and lethal force.
“India’s prime minister has appealed for a united fight against COVID-19, but has yet to call for unity in the fight against anti-Muslim violence and discrimination,” said Meenakshi Ganguly, South Asia director at Human Rights Watch. “Government policies have opened the door for mob violence and police inaction that have instilled fear among Muslims and other minority communities throughout the country”, she added. 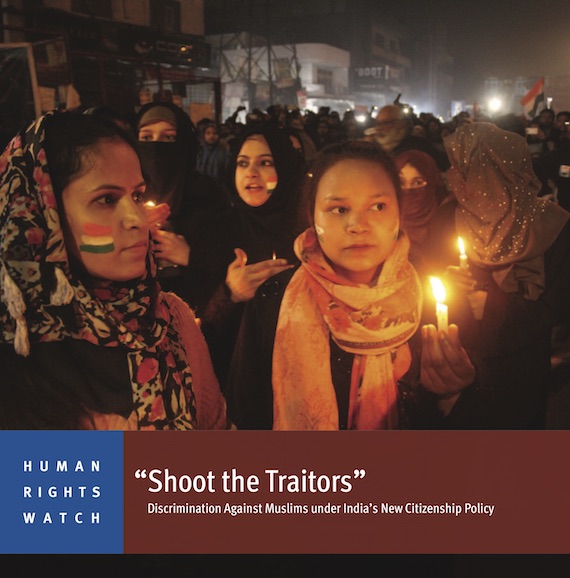 The report is based on more than 100 interviews with victims of abuse and their families from Delhi and the states of Assam and Uttar Pradesh, as well as with legal experts, academics, activists, and police officials.

The new amended citizenship law fast-tracks asylum claims of irregular immigrants from the neighboring Muslim-majority countries of Afghanistan, Bangladesh, and Pakistan, but excludes Muslims. It was enacted amid the BJP government’s push for a nationwide citizenship verification process, through a National Population Register (NPR) and a National Register of Citizens (NRC), aimed at screening out “illegal migrants.” While work on the population register has been deferred to prevent the spread of COVID-19, statements from the home minister and other BJP leaders have raised fears that millions of Indian Muslims, including many whose families have lived in the country for generations, could be stripped of their citizenship rights and disenfranchised.

The United Nations and a number of governments have publicly criticized the citizenship law as discriminatory on the basis of religion. But BJP officials have mocked and threatened protesters, while some of their supporters have engaged in mob attacks on critics and anti-government protesters. Some BJP leaders called for the protesters, whom they described as “traitors,” to be shot.

In February 2020 in Delhi, communal clashes and Hindu mob attacks on Muslims resulted in more than 50 deaths. Witness accounts and video evidence show police complicity in the violence. In one incident, police officers beat a group of five Muslim men injured in the mob attacks, taunting them, and ordered them to sing the national anthem as a form of humiliation. One of these men later died.

At least 30 people, mostly Muslims, were killed during protests in BJP-governed states, particularly in Uttar Pradesh. During other protests, including by students, the police failed to intervene when government supporters attacked protesters. “The police were present in the campus when the violence broke out,” said a student at a university in Delhi who was injured when a pro-BJP group attacked protesting students. “We sought help from them and then we ran to flee the attackers, but the police never came to our aid.”

The National Register of Citizens has already left nearly two million people at risk of arbitrary detention and statelessness in India’s northeast state of Assam. In August 2019, Assam became the first state to complete the register. Human Rights Watch found that the process in Assam lacked standardization, leading to arbitrary and discriminatory decisions by officials, and put undue hardship on poorer residents who do not have access to identity documentation – dating back for decades – to establish citizenship claims. Women, who are more likely than men to lack access to documentation, were disproportionately affected. The process in Assam has heightened fears over a nationwide citizenship registry.

The Foreigners Tribunals, which decide citizenship in Assam, lack transparency and uniform procedures, Human Rights Watch said. Rights groups and the media reported that significantly more Muslims were being tried and a much greater proportion were declared foreigners as compared with Hindus, because of apparent political pressure. Even some government officials and military personnel have been declared irregular immigrants.

“We sold two cows, chickens, and goats,” said a woman whose family could not afford the legal and document fees to establish their citizenship claims at a Foreigners Tribunal. “Now we do not have anything to sell.”

The Citizenship Amendment Act violates India’s international obligations to prevent deprivation of citizenship on the basis of race, color, descent, or national or ethnic origin. The Indian government should repeal the amendment and ensure that any future national asylum and refugee policy does not discriminate on any grounds, including religion, and complies with international legal standards. It should also discard any plan for a nationwide citizenship verification project until there are public consultations to establish standardized procedures and due process protections to ensure that it does not impose undue hardship on the poor, minority communities, migrant or internally displaced populations, and women, Human Rights Watch said.

“The Indian government has tried to delink the citizenship law from the citizenship verification processes, but it has failed to reassure minority communities because of contradictory, discriminatory, and hate-filled claims by BJP leaders,” Ganguly said. “The government should immediately reverse policies that violate India’s international legal obligations, investigate alleged police abuses, and protect freedom of speech and assembly.”

Illustrative Cases from the Report:–

Aslam, a Bengali Muslim who worked as a driver in Guwahati, was excluded from the National Register of Citizens in Assam even though his parents, wife, and children were included. His name was left out most likely because it was spelled differently in different documents, a common occurrence throughout the country. He said the spelling of his name on his voter identification card and his income tax identification card, known as the Permanent Account Number (PAN), were different. “The form for the PAN card is in English, but we fill the forms for voter identity card in Assamese,” he said. “Then when they change it into English, the spelling of the name often changes.”

Salima, 45, a Bengali Muslim in Barpeta district, was declared an irregular foreigner in February 2019. However, her relatives with the same documentation were certified. Her lawyer said this was because when Salima was giving oral evidence at the tribunal she was not able to properly explain her case, as often occurs in rural communities where people can be uncertain about ages and other details. “Litigants are poor, they do not understand the consequences,” her lawyer said. “She was not able to tell the court that she had a stepmother, and also how many brothers and sisters she had and their exact ages.”

Police in Muzaffarnagar district allegedly entered a madrassa, an Islamic seminary, on December 20, ransacked it, and detained its cleric and 35 students, 15 of whom were under the age of 18. The cleric, Asad Raza, said scores of policemen came following afternoon prayers, ostensibly looking for protesters, but instead went on a rampage, beating up people and destroying property:

When I opened the main gate, the police started beating me. They broke down every door to find students. They never told us why they detained us. They just started beating us. They took our mobile phones and did not return them. They also took some money from the office. Nothing like this has ever happened here.

SR Darapuri, a former senior police officer and now prominent activist, was placed under house arrest in December to prevent him from participating in protests against the citizenship law. The police nonetheless arrested him on false charges, perhaps to make an example of him. “If they could do this to a retired inspector general of police, I hate to think of what they are doing to the common man,” he said.

Darapuri said the police in Uttar Pradesh were acting in an openly discriminatory manner: “They do not bother hiding their bias, as they know they are fully protected.”