Moga: A written release by the Dal Khalsa states that the All India Sikh Students Federation (Peer Mohammad) with the support of Dal Khalsa and Sikh Youth of Punjab (SYP) will hold Genocide Remembrance Day March on the occasion of 32nd Year of genocide against the Sikhs in Indian cities in November 1984.

The organizations jointly asked the mainstream media not to use the word ‘riots’ while reporting the Nov 1984 unfortunate happenings. They were of the view that backed by Indian establishment, the then government of Congress (established by law) engineered the Nov 84 carnage. 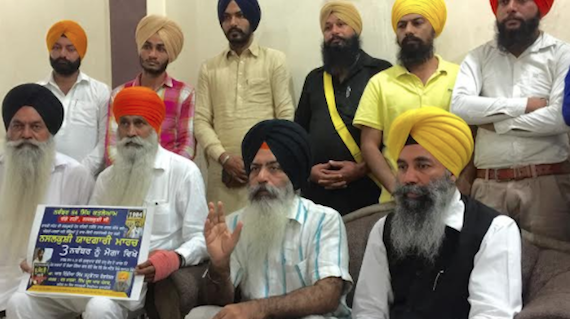 Announcing the protest programme AISSF acting head Karnail Singh Peermohamad said the march would be held on November 3 at Moga city. Addressing the press meet here today he said theirs party activists along with members of Nov 84 genocide welfare society and victims family members would undertake a March holding placards and banners in hands. He said to offer solace and pay tributes to innocent persons killed in the carnage, we would hold ardas at local gurdwara and lit candles in their memory.

He rue that 32 years have passed but justice still eludes as main perpetrators and conspirators have not been brought to the book. Pushed to the wall and having exhausted all internal forums, we see no place for refuge except the United Nations to intervene for the sake of justice to aggrieved community, said he. He said so far Indian leadership has chosen to rub salt on festering wounds of aggrieved Sikhs”.

Dal Khalsa leader Kanwar Pal Singh said 32 years ago in Nov, the notion of India died. He further said for 72 hours on the streets of the capital city of New Delhi, the fangs of the demons in India were given full play reducing the country to an uncivilized pre-historic society.

We are living in dangerous times as Indian state and its mainstream parties Congress and the BJP have travelled a long way in perpetuating gross human rights abuses and practicing politics of genocide. We believe that either the world community has failed to see or was turning a blind eye to this stark reality.

Not to be left behind, followed by Congress, the BJP too has practiced the same through its Ram Mandir campaign and the Narendra Modi took a leaf straight out of the Congress book in first killing Muslims in Gujarat in 2002, said he.