London/Amritsar: The joint letter written by Shiromani Akali Dal Amritsar (Mann) and Dal Khalsa to Sikhs For Justice seeking clarity on questions related to so-termed “Referendum 2020” has triggered war of words amongst the Sikh activists. 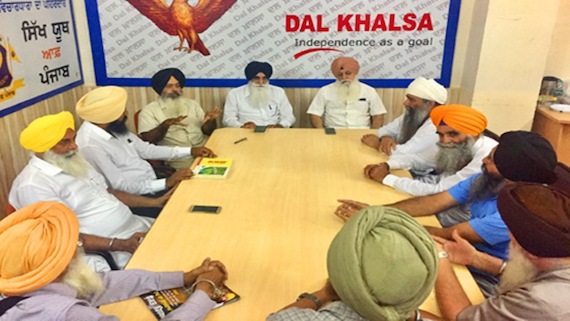 The Dal Khalsa on the other hand said that there existed no unit like “Dal Khalsa UK”. A statement issued by Dal Khalsa yesterday maintained that it had no organizational structure in United Kingdom and Sikh Federation being their alliance partner represents them in UK.

Party’s organizing secretary Ranbir Singh said Dal Khalsa is one entity and there exists no Dal Khalsa UK as of now.

Ranbir Singh clarified that after the death of our UK chapter head Bhai Manmohan Singh last year, Dal Khalsa has not nominated any member in UK to run the party affairs there. As we have alliance with Sikh Federation UK we decided not to constitute our own organizational structure in UK after the demise of Manmohan Singh.

Notably, Sikhs For Justice, a group of Sikh diaspora activists, led by Gurpatwant Singh Pannu is conducting a propaganda campaign advocating formation of separate Sikh state called Khalistan. SFJ has termed is campaign as “Referendum 2020”. Punjab based Sikh groups- SADA (Mann) and Dal Khalsa had raised concerns over certain aspects of the campaign through a letter addressed to Gurpatwant Singh Pannu few days back. Pannu has reportedly not responded the letter yet.