Norwalk,Connecticut: The Sikh community of Connecticut is one of the active and growing community of America who is pro Sikh Freedom. Connecticut Sikhs always stood against the Indian Govt. due to its track record of Human Rights violations on minorities.

Gurudwara Guru Teg Bahadar Foundation is also known as the backbone of Sikhs in Connecticut and one of the reputed Sikh organizations that was recently misguided and their trust was misused by GOPIO (Global Organization of people of Indian Origin-Connecticut Chapter).

Recently Sikh Representative were invited to Norwalk Mayor’s Harry Rilling office for meeting, without the full details of the meeting in which Indian Consulate General Sandeep Chakravorty was also invited and he offered his help to celebrate Guru Nanak’s Gurpurab. 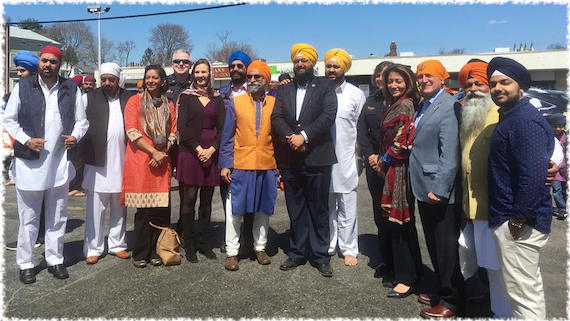 As we are aware that last year Sandeep Chakravorty was sued by Connecticut Sikh Community leader because of his role in interfering with state legislation process and for making false statements in his letter to State Senator Cathy Osten.

Gurmeet Singh President of Norwalk Gurudwara Sahib said “Our Sikh Community Member sued Sandeep Charavorty with defamation case because he issued a Letter in 2018 with intention that our state governor Dan Malloy,state representatives and state senators will not sign bill which recognizes Nov 1st as “Sikh genocide Remembrance Day”. In his letter He made false statements that “No persecution of sikhs happened in India and sikhs were responsible for violence in 1984. He also claimed that Sikhs to be terrorist.”

Swaranjit Singh Khalsa President Sikh Sewak Society International USA said “ I would like members of Sikh community to be on alert when they deal with any indian organization as Indian Consulate will use all the opportunities to interfere with our Gurudwara system and will also try to confuse our elected officials on affirmed stand sikhs of Connecticut hold for Freedom of Punjab from Indian Occupation .”

Khalsa also said that “We will appeal Connecticut Attorney General William Tong to take some action on Indian Consulate so Sikhs can celebrate 550th year of Guru Nanak Parkash Gurpurab this year without Indian Officials interference”.

Ram Singh Ex President of Gurudwara in Connecticut Said “Local library will be told to not keep any literature related to sikhs which is donated by Indian organizations without written consent of local Sikh Gurudwara Management.”