Today we salute Giani Ditt Singh on his birth anniversary. He fought against Brahmanical onslaught in the 19th century which attempted to convert Sikhism into a sect of Pan-Hinduism. With the installation of idols of Hindu gods and goddesses in Durbar Sahib, Amritsar, the Brahmanism had spread its tentacles among the Sikhs engulfing all their social and religious traditions 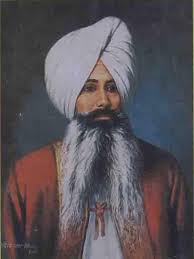 A portrait of Giani Ditt Singh

Born in 1850, a year after the British captured Lahore Durbar and merged Punjab into India of which the former never been the part before. Brutally battered under physical, cultural and educational onslaughts of the British, the Sikhs’ number dwindled to a mere 16 lakhs in 1880. At that time, Christian Missionaries and Arya Samajists launched their campaigns to convert particularly Dalit Sikhs into their respective folds. A bigger threat came from Arya Samajists whose project of building a Pan-India-Hindu identity targeted Guru Nanak and Sikh scripture.

At this critical juncture, Singh Sabha movement built by Giani Ditt Singh and Prof Gurmukh Singh established uniqueness and distinct identity of Sikh scripture and Sikhs in social and religious terms by publically defeating Arya Samajists in debates/ discussions. Before his early death at 51, Giani Ditt Singh had authored 50 books, tracts besides advocating for separate Sikh identity in his regular lectures and columns in Khalsa Akhbaar. His immense contribution inspired the later Sikh generation to remove idols from Durbar Sahib and to end restricted entry of Dalit Sikhs there. With this, began the Gurdwara Sudhaar movement which gave birth to SGPC and the Akali Dal.

A disturbing aspect Sikhs ought to know: Giani Ditt Singh was a Dalit and he was not served parshad in the Sikh congregations. Pocketing such humiliation, the tallest Sikh scholar used to slip out the gathering after giving a lecture before the serving of parshad. Caste prejudice meted out to Giani Ditt Singh about 125 years ago, still make the head of sensitive Sikhs hang in shame.

Happy to note, the Sikhs have traveled a long distance on social equality path since the 1880s with accepting Dalits at esteemed positions — Kabul Singh and others as SGPC president, Bhai Nirmal Singh et al as Hazuri Raagi and Singh Sahib Bhai Harpreet Singh as Jathedar of Akal Takht.

A discordant note: Recent episode of Bhai Nirmal Singh has again brought the Dalit issue among the Sikhs to a center-stage. Some Sikhs have resented recalling old interviews and statements given by Bhai Nirmal Singh himself before his death against the caste prejudice he faced as Hazoori Raagi. They contended that raking up caste issues at this juncture now would cause ‘a split in the Sikh Panth’. We understand that suppressing of dormant caste- disease still inflicting the Sikh society is bound to assume to cancerous proportion later. Instead of forcing Dalits into silence, the Sikhs should strive to remove the residual caste prejudices among them. Now Dalits are not contented with ‘lip-sympathy’ which Mahatama Gandhi / other Congress leaders attempted to dole out to Dr. Ambedkar. Similarly, Dalits are no longer appeased by Communists’ promise of setting up a socially equal society after ‘Revolution.’ Now they demand social equality with dignity herein. So the progeny of Giani Ditt Singh should be given their due for strengthening Sikh society socially and politically.