Every Sikh is to wear His Sword. Not his own. Kripan is a gift from the Guru. It is not an instrument of offence or defence; it is mind made intense by the love of the Guru. The Sikh is to have a sword-like mind. It is the visible sign of an intensely sensitive soul. 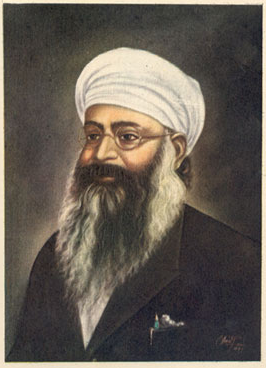 The sword cuts so rapidly, the mind can do so much in an instant. That common herd mentality with its drolly dullness, with utter incapacity to fly like the Eagles of Heaven cannot live together with the sword of Guru Gobind Singh. It is but the symbol of the myriad personality of the Guru’s Sikh, that knows no defeat, no disappointment, the personality, that is unconquerable in its hope, in its spiritual radiance. Guru Gobind Singh says, “I will make my one dominate over a million.” This domination is of the illumined mind. The highly intensified and developed intellect naturally becomes overpowering, so much so that it becomes fascinating and attractive in a physical sense. It gathers its own moths like the intense flame of a night lamp. The presence of a great spiritual man overpowers millions. What is mind if it has not the flash of the lightning and the sword? All conquests in the fields of life are mental and moral; physical conquests are no conquests. I think he who wears the Guru’s sword, is a spontaneous man fully grown in His Spirit and is of His spirit. This is to say a great deal. Herd mentality wearing the Guru’s sword is as great a mockery as the lighting of oil lamps in brass plates before the stone idol of Jagan Nath, against which Guru Nanak sang his famous Arti. It is no use wearing His Sword, if one has not become wholly spiritual and the animal in man has not shrunk to a pretty pet or, as St. Francis said, “his ass” or the forgotten shadow of a byegone self.

When He touched my hair and blessed me, how could I bear my hair being shorn? The Sikh is the dedicated. I nestle the fragrance of His touch in my tresses. I am the bride. They, of the modern era, have bobbed the bride but the Sacred Braids of Christ still remain the most beautiful adornment of man’s or woman’s head. I love the Guru’s superstition. The lightning spark is concealed in the wool of the wandering cloud in the sky and the life spark of the Guru is hidden in this sheaf of hair. They say it is troublesome to carry it. But more troublesome is a life of no inspiration. The body itself is not less troublesome. The daily toilet, powder and puff and rouge, and pearicaps, and arranging of ear drops and shingles is in no way less troublesome. And when one is reconciled to such a thing as the human body, to such a thing as this impossible life, it is emptiness of soul, it is bankruptcy of love for God and for the Guru to think of the riddance of hair, the spiritual crown of humanity. The modern woman, as I have said elsewhere, has lost most of her soul by shingling her hair and putting an odorous reed in her rose-bud-like lips.

I heard a stupid Sikh preacher the other day, trying to convince a mass gathering of the Sikhs that the iron ring of the Guru worn on the wrist is a protection against lightning. He said, as large buildings are made safe against lightning by a rod of iron, so the Guru has saved man from the stroke of lightning. He was hopelessly flinging his arms up and down to gather some straw of a reason to prove the rationale of the iron ring the Guru gave us as a gift. Coming to us from our personal God, dearer to us than our mother, father, sister or sweetheart, it comes to us as His Gift, as His Blessing. Fie on our manners that we argue over and over about it. He touched my hairs, and I keep it when I toss my arm up in the air and the iron ring, shines, I am reminded of His wrist that wore it—one exactly like this. Is this arm, by some stray gleam of the iron ring on my wrist, His? Other religions live in an elaborated symbolism; I the Sikh have no religion. He loved me. He made me His own. The sword is the mind where the Guru lives. The iron ring is the sign of His remembrance. The tresses of hair are as clouds round a snow peak—they always gather, gather—they always rain, rain. In my sacred tresses flow Ganga, Jamna and Godavari. Have I got the comb the Guru gave me? Have I got His other gifts? I may have lost them. But I cannot lose my tresses, I cannot lose my iron ring. Because, you remember how He called His disciple Bhai Gurdas from Benares. The disciples went as bidden and brought him with his hands bound with a string from Benares to Amritsar. Once the call of the Master was answered thus. Each one of us is called. We are of His Spiritual militia. We have to wear the ring which is His gift, and we are the prisoners of infinite love. These are the fetters of love, the price of our freedom. Each Sikh wears the hair and the beard of Guru Gobind Singh. We are moulded in His image.

Those who do not have that great personal love for the Guru are still out of court. But our freedom is in Him and not anywhere without Him. Do not talk to us in that strain of the Sikh preacher. These are not the symbols of a religion, nor essential rites of any religious discipline. They are the signs of our being “wedded women”. They are the wedding gifts from the Bridegroom. He gave all these to us, and they are sacred. Superstitious? Yes, But which love bath not and where at all bath love not its own superstitions?