This applies to Russia which hosted the Taliban for peace talks in Moscow attended by Afghanistan, India, Iran, China, Pakistan and five former Soviet republics in Central Asia with the US has observer.

Tellingly, the Taliban is banned from operating in Russia as it is classified as a “terrorist organization.”

The Friday talks were the second meeting of the Moscow-format consultations at the level of deputy foreign ministers and special envoys.

Neither the US nor the Afghan government wants Russia to lead such an initiative, known as the “Moscow Format”. Afghan President Ashraf Ghani, who pressed Russia to cancel a similar meeting in September, sent four senior members of his nation’s High Peace Council. 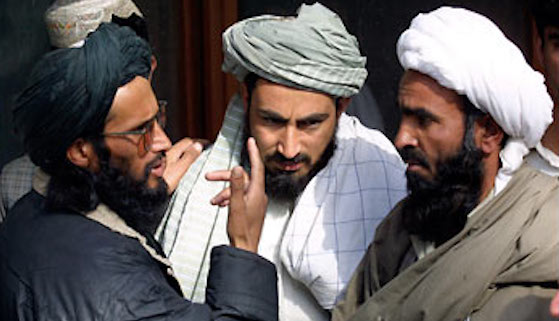 Observers do not expect quick results from the Moscow talks but the fact that the Taliban are in the same room as Afghan delegates, in Russia, with the US also in attendance is viewed as significant. It was also seen a triumph for Russian diplomacy.

Russia has challenged the U.S. by hosting the Taliban at a Moscow peace conference in the latest source of friction between the two former Cold War foes, Blumberg said adding:

“While the Moscow meeting isn’t likely to yield concrete results, Russia’s intervention is taking place as President Donald Trump’s administration has stepped up diplomatic activity, twice sending officials to meet with the Taliban in recent months and appointing a veteran envoy to advice on Afghan peace. The Taliban have said they are ready to talk to the U.S. to end the war, but not with the Afghan government they deem illegitimate.”

The U.S. sent an observer from its Moscow embassy to the meeting after it refused to attend the September talks, saying they wouldn’t help efforts to end the conflict.

Addressing participants at the start of the conference, Russian Foreign Minister Sergey Lavrov said the meeting is meant to seek paths to national reconciliation in Afghanistan.

Russia hopes “through joint efforts to open a new page in the history of Afghanistan.” He said that the participation of both Afghan leaders and the Taliban was an “important contribution” aimed at creating “favorable conditions for the start of direct talks”.

“I am counting on you holding a serious and constructive conversation that will justify the hopes of the Afghan people,” Lavrov said before the talks continued behind closed doors.

He emphasized that Daesh terrorists are being supported by “external sponsors” which are trying to “turn Afghanistan into a stronghold of international terrorism in central Asia.”

Lavrov said that “geopolitical games” are unacceptable in order not to make Afghanistan a “rivalry field between foreign players.”

The Afghan and Taliban delegations were divided at the roundtable only by Russian Deputy Foreign Minister Igor Morgulov, presiding over the meeting on behalf of the host country.

Sher Stanikzai reiterated that the Taliban does not see the current government in Kabul as legitimate.

“This government does not represent the people of Afghanistan, so we reject direct contact with them before the problem with the U.S. is solved. Therefore, we will talk with the Americans, especially about the withdrawal of troops,” he said adding:

“We met with the American side at the negotiating table and asked them to leave Afghanistan. But, of course, so far these negotiations are at a very early stage, we haven’t reached an agreement yet.”

RIA quoted Muhammad Sohail Shaheen, spokesman for the Taliban’s political office, as saying that before starting talks with the Kabul government, “the issue of the presence of external forces” needed to be addressed.

Shaheen also denied accusations by the U.S. military that Russia has supplied weapons to the Taliban, echoing a similar denial by Moscow.

This was the first time that a delegation of the Taliban’s political office in Doha, Qatar, took part in an event of this kind.

Moscow peace talks were held amid reports that the pro-US Kabul regime is losing territory to the Taliban in recent months.

Kabul’s control of Afghanistan slipped in recent months as local security forces suffered record-level casualties while making minimal or no progress against the Taliban, according to the US Special Inspector General for Afghanistan Reconstruction (SIGAR).

The New York Times reported on September 8, 2018, seventeen years into the war in Afghanistan, American officials routinely issue inflated assessments of progress that contradict what is actually happening there.

“More than 2,200 Americans have been killed in the Afghan conflict, and the United States has spent more than $840 billion fighting the Taliban insurgency and paying for relief and reconstruction. The war has become more expensive, in current dollars, than the Marshall Plan, which helped to rebuild Europe after World War II. That investment has created intense pressure for Americans to show the Taliban are losing and the country is improving,” the New York Times said adding:

Since 2017, the Taliban have held more Afghan territory than at any time since the American invasion. In just one week last month, the insurgents killed 200 Afghan police officers and soldiers, overrunning two major Afghan bases and the city of Ghazni.

It may be recalled that powerful police chief General Abdul Raziq was among three people killed in a brazen insider attack on a high-level security meeting last month in Kandahar.

The meeting was also attended by General Scott Miller, the top US and NATO commander in Afghanistan. He escaped unhurt, but US Brigadier General Jeffrey Smiley was among 13 people wounded in the shooting, which the Taliban said had targeted Miller and Raziq.

At least 8,050 Afghan civilians were killed or wounded in the first nine months of 2018, almost half of them targeted by suicide bomb attacks and other improvised devices that may amount to war crimes, the United Nations said last month.