Three thousand murders and no justice. Is this not betrayal? Sanjay Suri

New Delhi: Sanjay Suri, a journalist, has recently written his memories about the November 1984 killings of innocent Sikhs in Delhi after the assassination of the then Indian PM Indira Gandhi. An English vernacular, Indian Express, has published excerpts of Interview with Sanjay Suri. These excerpts are being reproduced, in verbatim, as follows for the information of readers/ viewers of the Sikh Siyasat News: 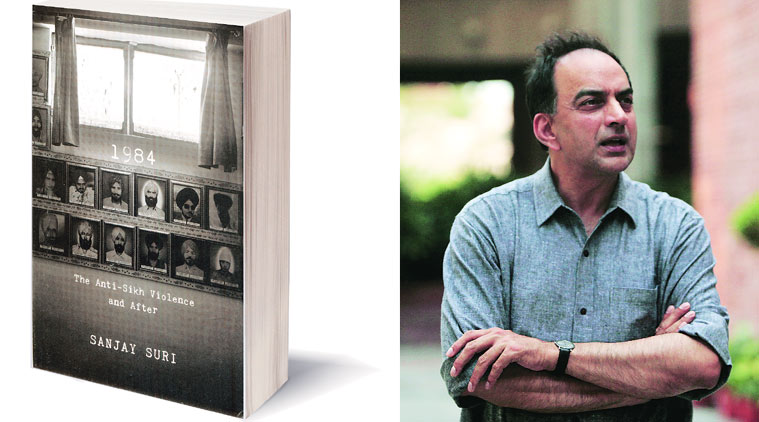 Sanjay Suri was staring at the dining table in his house in Malviya Nagar in Delhi, when he received a phone call. “Pata kar,” said a police officer friend, “Indira nu goli vajji ay.” It was October 31, 1984, and Prime Minister Indira Gandhi had been assassinated by her Sikh bodyguards. Suri, then 28, had been a journalist with The Indian Express for six years, the last two as a crime reporter. What started as follow-up into the assassination soon became coverage of mass killings of Sikhs. “I remember more of those three days than of all my years of reporting taken together,” says Suri, now Political Editor, Europe, for CNN-IBN. His book, 1984: The Anti-Sikh Violence and After (Harper Collins; Rs 499) comprises interviews with police officers, victims and campaigners, news reports and reports of commissions but it is Suri’s first-hand eye-witness accounts that hammer through the pages. Excerpts from an interview:

Thirty years later, how do you look back at the anti-Sikh riots?
I feel hurt and betrayed but with the sense that my feeling of hurt and betrayal is nothing compared to what people went through – the 3,000 people who died and the many thousands more who somehow survived, people who have lived with the loss, people who have been struggling hopelessly for justice. Perhaps if I had been a hardcore professional, 1984 would have been just another story but we had a career police officer like Ved Marwah saying that he had seen killings all his life but he was completely shattered by the brutality of what he discovered. And he only enquired into it, he didn’t actually see it.

Who do you feel betrayed by?
Betrayed by one government after another, betrayed by the police, betrayed by the judiciary. The police, first, failed to protect; second, it made sure that there would be no prosecutions. They did not register FIRs, they killed the process of justice itself. I feel betrayed by the Supreme Court commission of enquiry, one after another, which were set up. It was not just me who was betrayed, all of us were betrayed. You were betrayed as an Indian, as a person. What is it to live in a country, in a city, in which 3,000 murders took place and there was no justice? What does it feel? Is it not betrayal?

You were a young reporter at the time, on the crime beat. How different, in violence and scale, were these riots.
These were not riots, these were killings. I had covered riots before, in the Walled City. Now, thankfully, you don’t have communal riots in the city at all but these used to be very common at one time. Every few months, there would be incidents of violence around Jama Masjid but there were not that many killings. Killing was a serious thing, it was the ultimate crime. A body found would be terribly serious.

When did you realise the scale of the killings?
The killing started the day after the assassination but even then, in the middle of the killing, we didn’t realise how much. On November 1, I went out and found that two Sikhs had been burnt alive at Rakabganj Gurdwara. It was, I think on the third day that, I wrote the lead story in The Indian Express. The headline was ‘Murders have turned into Massacres’. It took a while for us to understand the scale of it. There was no communication from the police, there was no internet in those days, there was one official channel doing the government’s job, there was no mobile phone, nothing. We could make a landline call to the police from who we learnt nothing. Even on the third day, I did not realise that 3,000 had been killed. Hundreds were killed in Sultanpuri. We did not have immediate information, as it happened. The killings happened on November 1 and 2; it was only on the morning of November 3 that I could report that murders have turned into massacres. How did we come to know there were massacres? Only through The Indian Express reporters. The police were not admitting anything. Another reporter, Rahul Bedi, went to Trilokpuri; I went to Sultanpuri, which is where the biggest killings had taken place. When we came back, we realised how big this is.

You have written separate chapters on killings in different parts of Delhi. Rakabganj Gurdwara was the first site of murders. What did you see there?
When I went to Rakabganj Gurdwara, there were crowds outside and they were surging. Two Sikhs had already been burnt alive. I saw a crowd on the road surging again and again towards the gurdwara. By the side of this crowd was Kamal Nath. The crowd move forward, he raised his hand and they stopped. You could see this two ways– he stopped the crowd. My question is –what is the relationship between him and them that he had only to raise his hand and they stopped?

Did you write the book merely to mark the anniversary of 1984?
Somebody asked me, “Why did you wait 30 years to write a book?” Well, I didn’t wait to report the killings, not even a day. Everything was in The Indian Express the next morning. I turned my reports into affidavits in front of the Mishra Commision and then, Nanavati. That time, there was strong hope there would be some justice to which I would contribute my little bit. Thirty years later, that belief has still not entirely killed, despite the committees and commissions that have come and gone and done nothing. Many of the killers of the 3,000 people are still around. The police FIRs covered only 1,400 of them, which was less than half but, there is a fractional hope that it is still possible to make some arrests. Whether this will lead to a conviction in a court, who knows and I doubt it. The police should make the arrests and book these people. It would do something to ease the hurt in the Sikh side; and it is hurting.There were police officers, too, who stood up to the mob.I was not at the scene but I interviewed Maxwell Pereira at length. He was the Additional DCP (North District). There is a chapter on him and how he saved Sis Ganj almost single handedly. The reason I give these accounts now is partly to note the heroes of the time and they were rare. But, the idea is not just to note the heroism of an individual but to report these as what was possible. Just with a jeep-load of policemen and a few more gathered along the way, he stood in front of Sis Ganj and he would not let it be attacked.

You mention covering the 9/11 attacks in New York and Washington and have compared it to 1984.
I have put down in the book, that I reported the 9/11 attacks in the US for the Outlook magazine. Three thousand killed there in a sudden, violent attack. Three thousand killed in New Delhi in a sudden violent attack. How have we reacted? How did they react? They said, ‘We want justice’. They didn’t forget it. Why are we being told, ‘forget about it, chhodo?’

NOTE 1: Above content was originally published by the Indian Express under title “Sanjay Suri: Three thousand murders and no justice. Is this not betrayal?” by Dipanita Nath at source url ~ http://indianexpress.com/article/lifestyle/books/sanjay-suri-three-thousand-murders-and-no-justice-is-this-not-betrayal/

(Note 2: Sikh Siyasat News does not endorse the use of term “anti-Sikh riots” for the “Sikh genocide of November 1984“. Views expressed by interviewer and interviewee are their own).