New Zealand: An earthquake with a magnitude of 7.8 struck central New Zealand just after midnight, the U.S. Geological Survey said, generating a tsunami that hit the northeast coast of the South Island.

New Zealand’s Ministry of Civil Defence and Emergency Management warned of the risk of destructive waves along the country’s entire east coast and urged residents in low-lying areas to evacuate and seek higher ground.

Monday’s quake, initially put at 7.4 but later upgraded, struck at 12:02 a.m. It was only 10 kilometre deep and felt throughout most of the country.

The main tremor was followed by a series of strong aftershocks and there were reports of damaged buildings in the small rural township of Cheviot near the epicentre.

Anna Kaiser, a seismologist at GNS Science said a tidal signal or surge of up to one metre (3 feet) had been recorded in North Canterbury region of the South Island.

The quake was centred 91 km (57 miles) north-northeast of Christchurch, the biggest city on New Zealand’s South Island. A 6.3 quake there in February 2011 killed 185 people and caused widespread damage. 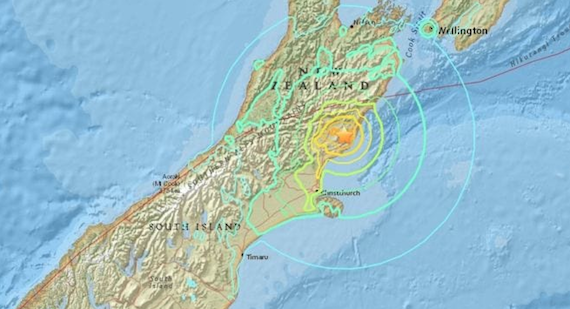 The tremor, which was measured by New Zealand’s Geonet at magnitude 6.6, was felt throughout most of New Zealand. Civil Defence said it was too early to assess the damage or whether there had been any injuries or deaths.

“The whole house rolled like a serpent and some things smashed, the power went out,” a woman who gave her name as Elizabeth told Radio New Zealand from her home in Takaka, near the top of the South Island.

Chris Hill, a fire officer in Cheviot, a coastal town near the quake’s epicentre, said officials had gone door to door evacuating residents.

“Everyone seems OK here,” he told RNZ. “There’s a lot of debris in houses, but at this stage it doesn’t look like anything too bad has happened.”

Residents in Wellington said glass had fallen from buildings into the streets and hotels and apartment buildings had been evacuated.

A series of aftershocks were recorded around the country, some as strong as 6.1 magnitude.

“It was massive and really long,” Tamsin Edensor, a mother of two in Christchurch, told AFP, describing the powerful quake as the biggest since the deadly 2011 tremor.

“We were asleep and woken to the house shaking, it kept going and going and felt like it was going to build up,” she added.

In a brief message the Prime Minister John Key tweeted, “I hope everyone is safe after the earthquake tonight.”

The ambulance service said it did not receive any reports of quake-related injuries.

However, the national civil defence organisation, which is in charge of New Zealand’s emergency management, earlier said that a tsunami was possible.

“The first wave activity may not be the most significant,” it said in a bulletin, adding tsunami activity would continue for several hours.

Anna Kaiser, a seismologist with the GNS Science, said the government’s earthquake monitoring service, the quakes were close to the coast.

“They’ve been quite large. We’ve also seen a signal on the tide gauge at Kaikoura which is up to one metre (three feet) so it’s reasonably significant, so people should take this seriously.”

However, the Pacific Tsunami Warning Centre said that based on available data “a destructive Pacific-wide tsunami is not expected.”

In September, a strong 7.1-magnitude earthquake struck the east coast of New Zealand, generating a small tsunami, but no significant damage or injuries were reported.

New Zealand is on the boundary of the Australian and Pacific tectonic plates, which form part of the so-called “Ring of Fire”, and experiences up to 15,000 tremors a year.