Birmingham, UK: An impressive gathering of diverse communities heard from several noted experts about the plight of national and religious minorities in India; it called on the international community to take on the “insipid and wholly destructive phenomena” of the Hindutva project which poses a threat not only to those minorities but the peace and security in the wider region. 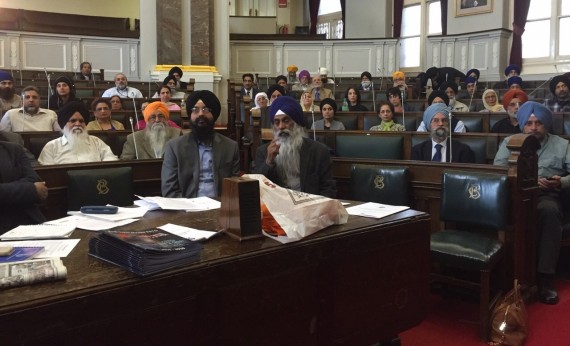 An array of leading Sikh and Kashmiri diaspora organisations participated to the Conference which also heard from the major political parties in the UK, aimed at re-shaping the UK’s foreign policy vis a vis a state that is now openly under the control of a Hindutva movement which has progressively spread its wings since the British decolonisation in 1947. Chaired by Lord Nazir Ahmed, the event was addressed by respected academics Dr Iqtidar Cheema, Dr Gurdarshan Singh Dhillon (from Punjab), Professor Nazir Shawl of Kashmir Concern, Professor Zafar Khan, and John Joshva Raja. In addition Graham Williamson (Nations without States), Ranjit Singh Srai, Raja Iftikar Ahmed Khan and Advocate Khalid Rasheed (both from Azad Kashmir) gave their perspectives on the terrible record of denial of collective and human rights of minorities by the Indian state. Speaker after speaker called for freedom and the rule of law as the only means of securing dignity and justice in the face of an existential threat posed by the Hindutva movement. It was time to win over the world community to make Hindutva itself the ‘minority’ that needed to fear the ‘majority’ of civilised human values and international standards.

Roopinder Kaur, who travelled from the USA to speak at the event, gave a chilling account of how her 83 year old father Bapu Surat Singh – who is on hunger strike in India to protest at India’s refusal to release Sikh political prisoners – has been forcibly fed by Indian security forces, They have isolated him from the Sikh masses and illegally detained and tortured his son. She was presented with a siropa (robe of honour) by Sukhvinder Kaur who represented Sikh Organisation for Prisoner Welfare.

From the forcible, illegal denial of the right of self-determination in Punjab and Kashmir, which has cost hundreds of thousands of lives, to the genocide of Sikhs in 1984 and Muslims in 2002, to the attacks on Mosques, Gurdwaras and Churches India’s appalling record was characterised as a fascist affront to millions of people which India’s judicial system seemed intent to ignore. Open Doors, a respected campaigning organisation set up to protect persecuted Christians sent the Conference a message stating that the situation in India, which is on its ‘watch list’, has – as predicated – taken a turn for the worse since the election of Hindu fundamentalist BJP leader Narendra Modi as PM. It called for the UK to prioritise human rights and the rule of law in all trade, aid and diplomatic engagement with India, as well as raising the issues at bilateral and multilateral levels, to help safeguard the minorities.

Fabian Hamilton, a senior UK Labour Party politician who has for several years chaired the cross party group on Sikhs in the UK Parliament, issued a statement for the event in which he called on India to end its “unacceptable” rejection of the right of self-determination as laid out in the 1966 International Covenants on Human Rights so that peaceful democratic outcomes to the conflict in Kashmir and Punjab could emerge. John Hemming (Liberal Democrat) called for international action to punish those guilty of genocide. Charlotte Hodivala (Conservative party) assured the gathering that she would take up their concerns if elected to Parliament on the 7th May. Councillor Narinder Kaur Kooner spoke to support Sikh and Kashmiri self-determination and suggested local authorities should endorse this key human right to exert pressure on the Westminster government to promote this at international level.

British Kashmiri Women Council’s Rana Nazir castigated India for “torturing, killing, raping since 1948” in Kashmir and congratulated the joint action by Sikhs and Kashmiris to pursue the right of self-determination for their suffering nations. Amrik Singh Sahota OBE of the Council of Khalistan said that people power was ultimately never defeated and that freedom was ultimately inevitable in Khalistan – as per the declared goal of the Sikh nation at its national gathering (Sarbat Khalsa) in 1986 – in response to India’s aggression. Raja Amjad Khan, chair of the All Parties Kashmir Co-ordination Committee, called for diaspora communities to work closely with the political parties and secure their support in taking these fundamental foreign policy concerns in to action when the next Government took up office following the forthcoming elections.

A: Urges the UK’s political parties, Foreign office officials and the new Government that will be formed after the general elections on the 7th May 2015 to take forward the proposals put forward at this Conference to protect the human rights of national and religious minorities in India. The sizeable Sikh, Kashmiri and Christian diaspora communities in this country want their political representatives to put human rights and the rule of law at the heart of all trade, aid and diplomatic interactions with India. Included in that agenda should be:

1. Recognition of and respect for the right of self-determination as set out in the 1966 International Covenants on Human Rights, so as take forward the only possible means of peaceful conflict resolution in Kashmir, Punjab, Nagalim and elsewhere;

2. Release of political prisoners, including prisoners of war in armed conflict initiated by Indian military forces, where those armed conflicts have come to an end.

3. Establishment of an international criminal tribunal to punish those who have carried out genocide against the minorities in India, given the complete failure of the Indian judicial system to act despite India’s obligations under the Genocide Convention 1948

4. International condemnation of the ‘Hindutva’ movement that seeks to threaten, intimidate and marginalise national and religious minorities in India. The recent attacks on Christians and churches as well as the dangerous ‘ghar vapsi’ scheme betray the fascist tendencies of an insipid and wholly destructive phenomena which the world can well do without.

B: Salutes the sacrifices of all those who have laid down their lives in noble pursuance of human rights so that their people can live with dignity and freedom in their own homeland, and honours those who have been the victims of the massive, systematic breached of those human rights over recent decades in India.

C: Calls on the international community to recognise the struggle for national self-determination by the Sikhs in Punjab and the Kashmiri people as not only the lawful and peaceful means to conflict resolution but also the means to achieving enduring peace and security in a region that is otherwise likely to be the theatre of major international conflict. Indian belligerence towards the Sikhs and Kashmiris as well as to neighboring states must be tacked by international efforts at the bilateral and multilateral level. The UN itself must engage with this process and firmly deny India a permanent seat in the UN Security Council until Indian complies with its fundamental obligations under international law.