UK: The Sikh Network deliberate on Next Steps following the general election

London: The Sikh Network held its first meeting following the General Election and took stock of the wide ranging and positive impact of the Sikh Manifesto with political parties, politicians and officials in government. The role of the Sikh Network, its structure and some of the priorities were discussed. A press release by the Sikh Federation UK enlists following points in this regard: 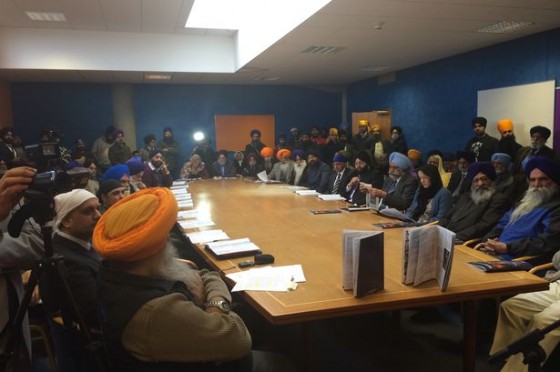 Structure of the Sikh Network – It was confirmed the Sikh Network was not an organisation, but a network of like-minded Sikhs focused around the Sikh Manifesto. However, as the Network had grown to over 1,200 individuals and helped by the Sikh Federation (UK) to link up with over 150 Gurdwaras there needs to be co-ordinated activities at the local as well as national level. Co-ordinators in each of the 12 regions of the UK have been identified to firm up on coverage of around 300 MPs by Sikh constituents, maintain close and regular contact with local politicians, begin to bring together local Sikh talent and maintain close ties with local Gurdwaras.

Delivering Sikh MPs in 2020 – The Sikh Network working with the Sikh Federation (UK) has identified eight target Parliamentary seats for 2020 or earlier. There are two specific seats that may become available prior to a General Election as MPs stand down through ill health or retirement where large numbers of Sikhs live and where there may be by-elections. In addition, there are around half a dozen seats that have been identified where there are large numbers of Sikh constituents and the majority following the 7 May elections is a few hundred votes or less. The plan is through Gurdwaras and organisations like the Sikh Federation (UK) to encourage local Sikhs to become members of the two main parties in larger numbers in these eight seats so Sikhs are in a position to influence who will be the main candidates in either the by elections or in the 2020 General Election. This could result in some of these seats having suitable Sikh candidates and hopefully MPs with credibility who are sincere and trustworthy.

On top of this MPs in a dozen safe Parliamentary constituencies where there a large number of Sikh voters have been identified and their performance with respect to Sikh issues in the Sikh Manifesto and other issues that may emerge is to be monitored. After two years if their performance is judged to be unacceptable Sikhs will be pressed to become members of the relevant political party in larger numbers and working with non-Sikh party members bring forward potential replacements and consider de-selection.

At the same time to get suitable Sikh candidates in the first place we need to support and persuade Sikhs active in the main parties to put themselves in a position to be selected. In the Conservative Party Sikhs will need to get on the ‘Approved list of Parliamentary Candidates’ and look for suitable opportunities. In Labour the current process is different and will require Sikhs who wish to be candidates to identify suitable seats and apply through a CV, interview and longlist/shortlist process. The Sikh Network working with the Sikh Federation (UK) will connect with the main parties at a national level in ensuring suitable candidates are assisted, such as getting on Labour’s Future Candidates scheme and working with the party HQs to identify suitable seats that are winnable by Sikh candidates.

Priorities in the Sikh Manifesto – These were discussed and several identified that are time limited e.g. securing a suitable site in central London for a monument for Sikh sacrifices in the First World War and separating ethnic monitoring of Sikhs. Following the General Election and the appointment of Ministers the Sikh Federation (UK) has confirmed it has been in contact and held meetings with key officials to inform them that the Sikh Federation (UK) would require contact with nine different Government Departments, although the immediate focus would be on three or four departments in the next two months.

All Party Parliamentary Group (APPG) for UK Sikhs – At the Sikh Network meeting the new membership and revised structure for the APPG that was to be proposed was discussed. The two previous chairs of the APPG Rob Marris MP and Fabian Hamilton MP have met and discussed its future leadership, proposed structure and arrangements for re-registering the APPG. Following the Sikh Network meeting there have been written exchanges and a meeting with the Sikh Federation (UK) to discuss possible office bearers and the work programme linked to the Sikh Manifesto.

Serious note was taken of the role prior to the General Election of certain Sikh organisations and individuals that claim to represent Sikhs and the way they were used to become partisan. The Sikh Federation (UK) set up the APPG 10 years ago in 2005 and is formally recognised as providing secretariat support via volunteers. Given the significance of the Sikh Manifesto the Sikh Network will also provide support and leading Sikh Gurdwaras have been suggested as sponsors for several exciting proposals that are expected to be agreed at the first formal meeting of the APPG for UK Sikhs.