US based Sikh leaders condemn attack on Sikh pracharak Dhaddrianwale

US Sikh leaders condemn the recent attack on a Sikh preacher Baba Ranjit Singh Dhadrianwale in Punjab. Various prominent Sikh organizations and important Sikh personalities in Punjab have come forward to express their outrage and condemned this criminal act. People who have been arrested in the initial rounds have links with Damdami Taksal and some of them have claimed responsibility. Bhai Dhadrianwale had visited USA and Canada in the beginning of May and he was attacked by a organized group of people in Ludhiana on May 17, 2016.

Dr. Rajwant Singh, Washington based Chairman of the Sikh Council on Religion and Education, said, “The assassination attempt on the most famous and credible preacher of Sikhism is a highly condemnable and the way this attack was carried out under the pretext of organizing a chabeel is a heinous crime. It is an attack on the Sikh tradition and its ethos. This kind of violence on respectable and revered personalities among Sikhs is reprehensible.

“Some individuals who have been apprehended by the police have taken responsibility and have said they will continue to attack anyone who challenges their thought process, or criticizes their organization, namely Damdami Taksaal. This is totally repugnant and these kinds of actions have no place in Sikh practices and should be condemned by all those who love and practice Sikhism”, he said in a written statement. 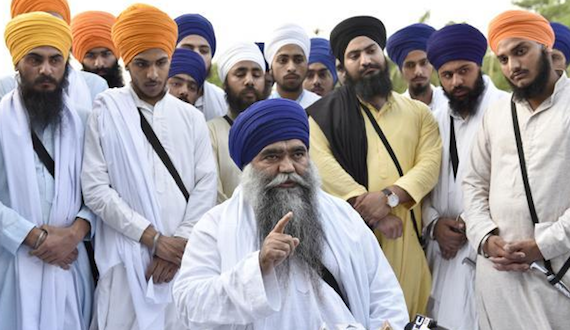 Gurdev Singh Kang, President of the Sikh Cultural Society, a New York based largest Sikh Gurdwara, said, “ This incident has brought shame to Sikhs all over the world and nobody should be allowed to cause fear amongst the preachers of Sikhism or those who are trying to spread the message of our Gurus. It is highly critical that the Punjab government take immediate and stern action to apprehend those who were involved in the planning and execution of this attempted murder. We are also saddened that Bhai Bhupinder Singh’s life was taken, who was survived by two small children and his wife.

He further added, “We are continuously watching how the police investigation is unfolding, especially when all the evidence is clear and those who have been arrested have claimed responsibility. What is the government waiting for? If this kind of criminal activity is not curtailed immediately, this will send a very wrong signal about the functionality of Punjab government.

Sarabjit Singh Sidhu, Chairman of the Guru Gobind Singh Foundation, based in Washington, DC, said, “We are continuously watching how the police investigation is unfolding, especially when all the evidence is clear and those who have been arrested have claimed responsibility. What is the government waiting for? In the last few months, the Sikh community has been gravely disappointed in the lack of action taken by the Punjab government in apprehending those who were involved in the desecration of Guru Granth Sahib Ji. And their inaction in this incident will also be seen as evidence of them condoning the violence and their inability to govern. They must take action and arrest all those who were involved and those who were the masterminds behind this plot.

Rajwant Singh added, “The Sikh faith does not allow anyone to take the life of another individual on the basis of a difference of opinion or belief. Sikh premium organizations in India have been silent and their silence is sending the wrong message. No Sikh individual or head of an institution is above the law and their status in society does not give them the right to kill off anyone that criticizes them or has a different opinion”.