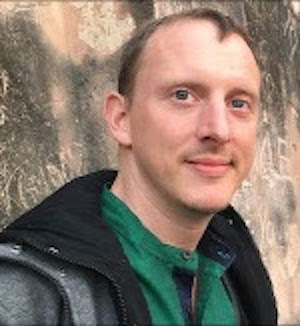 Gabbard stuck it out. She pledged to soldier on until the Democratic Party’s National Convention in July 2020. And she started making headlines — including about her alleged support from both Putin’s Russia and India’s Hindu nationalist movement.

The news isn’t always positive but, as the saying goes, any press is good press.

“Hillary Clinton suggests Russians are ‘grooming’ Tulsi Gabbard for third-party run,” reported CNN in mid-October. Yet Gabbard shot back, calling Clinton “the queen of warmongers” and “embodiment of corruption”. By mid-November, CNN was reporting that Gabbard actually received a boost after Clinton’s attacks raised her profile nationally.

Tulsi Gabbard on the Rise, Passing Up Kamala Harris
Gabbard is on the rise. While she is back in the debates, her poll numbers in early voting states like New Hampshire are steadily increasing — in NH, she has at times risen to fifth place out of a still-crowded Democratic primary of 18 candidates. She has also outlasted formerly top-tier candidates like Beto O’Rourke and, in NH, is outpolling candidates who have outraised her.

For instance, Gabbard is passing up Kamala Harris, whose poll numbers crashed soon after the July debate in which Gabbard lashed out at her record as a prosecuting attorney. The Hawaiian congresswoman has only raised a quarter of the USD 36 million the Californian senator has pocketed. Yet Harris, the only Indian-American candidate, is not only sinking in the polls but has failed to galvanise Indian diaspora support. As India Abroad reported in April, Indian-American donations to Gabbard surpassed those to Harris by a margin of more than 3 to 1.

Gabbard is making significant strides as she demonstrates a willingness to go head-to-head with her own party’s establishment. 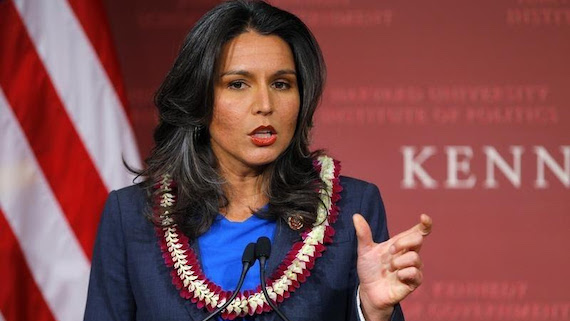 During the 2016 presidential election, Clinton was widely perceived as “untrustworthy’ and “unethical”, a perception that Gabbard plays upon. On the eve of the 20 November Democratic debate, Gabbard’s attorneys accused Clinton of defamation, demanding she retract her 17 October description of the congresswoman as the “favourite of the Russians”.

RSS ‘Support’ of Tulsi Gabbard
Gabbard’s demand has some standing. On 24 October, Fairness & Accuracy In Reporting — a national media watch group — rubbished the allegations. “There is no evidence that Gabbard… is any kind of Russian agent,” reported FAIR. Such “silly accusations,” the group stated, are rather a nonsensical distraction from “the reality that Gabbard’s most troubling attribute is her documented connection to the far-right Hindu nationalist, or Hindutva, movement known as Rashtriya Swayamsevak Sangh (RSS), the parent organisation of India’s ruling BJP party.”

That connection traces back to 2011, a year before Gabbard was first elected to the US Congress and long before the BJP rose to power in India.

As she sought election and then re-election, Gabbard owed much of her success to support from the same leaders of overseas wings of the RSS and BJP who mobilised to get Modi into office. Even as evidence of this connection emerged over the past year, her campaign has entrenched her notoriously close relationship with Modi while reciting RSS/BJP talking points in defence of the Hindu nationalist movement.

Tulsi Gabbard ‘Justifies’ Article 370 Revocation in Kashmir
Gabbard made a name for herself among American progressives in 2016 when she resigned from her powerful position on the Democratic National Committee to endorse socialist Bernie Sanders for president — a move that put her at odds with then Democratic front-runner Clinton. Today, however, she is at odds with Sanders not only as his opponent in the 2020 Democratic primary but on foreign policy issues. One conspicuous example is their contrasting positions on Kashmir.

“I am also deeply concerned about the situation in Kashmir,” said Sanders on 31 August 2019 — just three weeks after the abrogation of Article 370. Criticising the “communications blackout” and “crackdown in the name of ‘security’,” he declared, “India’s action is unacceptable.”

“It is complex,” said Gabbard when asked about Kashmir at an 8 September campaign rally. Referring to the 1990 exodus of Kashmiri Pandits, she said, “Many families were driven from their homes there, and fled, and have not been able to return home.” Insisting that Kashmiri women previously had no rights to own property, she added, “The previous government had policies in place that made homosexuality illegal.”

Her rhetoric directly mirrored that of India’s right-wing which, as journalist Anish Gawande explained, increasingly adopts the argument that “Article 370 was removed to protect minorities.”

The result is that LGBTQ rights are “used as bait to target every voice decrying the changes to Article 370.” This tactic was forcefully employed in October, for instance, when masked protestors, shouting “Gay for J&K,” shut down a London University panel on Kashmir.

Gabbard Absent from ‘Howdy Modi’, Indian Ambassador Comes to Her ‘Rescue’
None of the other Democratic presidential candidates have echoed Gabbard’s BJP-esque rhetoric.

“I’m really concerned about what’s happened in Kashmir,” said O’Rourke in mid-September (before he dropped out). Elizabeth Warren, currently a front-runner, recently remarked, “The rights of the people of Kashmir must be respected.” Even Harris warned that “we are all watching” and referred to the possible need to intervene to prevent any human rights abuses.

Gabbard’s interest in swimming against the progressive current was further illustrated by her response to Modi’s recent visit to the US.

The ‘Howdy Modi’ rockstar reception on 22 September in Houston, Texas was supposed to be a propaganda bonanza for the BJP. As ANI reported, BJP Foreign Affairs Cell In-Charge, Vijay Chauthaiwale, “spearheaded the preparations.” Over 60 “prominent US lawmakers, including… Tulsi Gabbard” were slated to attend, reported India Today.

The event ended in disarray. Ultimately, only 21 US congressional representatives attended. Only one of five Indian-American lawmakers — Congressman Raja Krishnamoorthi — showed up.

Even Gabbard herself was a no-show, although her exit was clouded by confusion. Reports circulated that she dropped out in solidarity with fellow Hindu-American Congressman Ro Khanna’s recent call to “reject Hindutva” — yet, reported DNA India, she “vehemently denied the claims.” India’s ambassador to the US, Harsh Shringla, rushed to her defence, calling her a “staunch supporter” of Modi. Issuing a welcome video, she apologised for missing Modi’s rockstar reception “due to previously scheduled presidential campaign events.” She added that a strong partnership with India can “bring about the ideal of Vasudhaiva Kutumbakam” — a phrase (meaning “the world is one family”) which professor Audrey Truschke noted has been adopted by Hindutva groups such as the Vishwa Hindu Parishad.

Tulsi Gabbard on Hindu Nationalism
Of the 65,000 people present at “Howdy Modi,” an estimated 15,000 were protestors outside the event. Yet Gabbard stated the event was “bringing together Indian-Americans and Hindu-Americans from across our country.” Then she met Modi on 27 September in New York City.

It was their fifth meeting in five years.

As Gabbard met Modi, Truschke and others were outside protesting. “Modi and his political party, the BJP, openly adhere to Hindutva,” declared Truschke at the protest. “The Modi sarkar [government] has made it very clear that all who oppose Hindutva are enemies. Really, anyone who merely accurately describes Hindutva is an enemy in the eyes of the Modi government. As a result, the BJP and associated groups have ruthlessly attacked the media, academics, and any other dissenters in India.”

Yet Gabbard was unfazed.

That weekend, her campaign launched a new fundraiser — a raffle for a free trip to India.

Featuring a photo of her garlanding Modi, the fundraiser was hosted at the (now defunct) URL: Tulsi2020.com/Howdy.

In a 13 October interview with Gabbard, The Times of India, noting that she had missed ‘Howdy Modi’, asked, “How do you view such rallies and the expression of what some people see as an upsurge of Hindu nationalism and Hindu pride?” She responded: “Hindu nationalism is a term that many people are using frequently without being specific about what they mean by that. Why is expressing pride in one’s religion a bad thing?”

Gabbard further asked, “If you take out the word Hindu and you replace it with Muslim or Catholic or Jewish, then what do you end up with?” The answer is, of course, you end up with religious nationalism no matter which religious label precedes the “nationalism” term.

Gabbard Not the Only US Congressional Rep With RSS Links
Tulsi Gabbard is not the only Democratic presidential candidate with links to India’s far-right — though she is apparently the only one offering apologetics for Hindutva and its alleged atrocities.

“Links to Modi and Hindu nationalism can even be found in at least three Democratic presidential campaigns,” wrote journalist Rashmee Kumar. She cited frontrunner Joe Biden, whose campaign recently hired the son of the Overseas Friends of the BJP (OFBJP) co-founder and Pete Buttigieg, whose campaign policy director is the former national coordinator of VHP-America and daughter of a former OFBJP vice-president.

Nor is Gabbard the only US congressional representative associated with the RSS.

Raja Krishnamoorthi joined RSS Chief Mohan Bhagwat at last year’s World Hindu Congress in Chicago — an event Gabbard, after months of pressure, eventually publicly dropped out of — and recently headlined a celebration of the RSS’s founding organised by the group’s international wing, the Hindu Swayamsevak Sangh.

FAIR reported, Gabbard has “received crucial financial support from the Indian-American far right.” Her funding from RSS-affiliated donors traces back to before she was first elected in November 2012. In 2013, approximately 21 percent of her donations came from members and executives of Hindutva groups — rising to approximately 24 percent in her second year in office.

While Clinton levels allegations that incite American political commentators to rant about Gabbard’s perceived support from Russia, they overlook the real hard evidence that her actual support comes from — and goes to — India’s Hindu nationalist movement.

Gabbard Has Found Her Niche As ‘Anti-Establishment’, ‘Anti-War’ Candidate
In late October 2019, Gabbard announced that she won’t seek re-election to US Congress. “I’ve always done my best to serve where I felt I could make the most impact,” she declared. “I believe I can best serve the people of Hawaii and our country as your President.”

Gabbard has found her niche as the anti-establishment and anti-war candidate.

“I’m running for president to rebuild our Democratic party, take it out of the hands of the foreign policy establishment in Washington, the military industrial complex, and greedy corporate interests and truly put it in the hands of the people,” she declared at the 20 November debate. Cashing in on her military service, she added, “I volunteered to deploy to Iraq where every single day I saw the terribly high human cost of war. No, I’m not going to put party interest first. I will put the interest of the American people above all else.”

Gabbard’s Rhetoric Echoes Trump’s ‘Drain the Swamp’ Slogan
Her rhetoric is reminiscent of Donald Trump’s “drain the swamp” slogan. It’s a populist, anti-corruption, proletariat vs bourgeoisie message. Perhaps then it’s not surprising that Gabbard’s support base overlaps with Trump’s — as one analysis of poll respondents revealed, her supporters “are more likely to have backed President Trump in 2016, hold conservative views or identify as Republican compared to voters backing the other candidates.” Her no-holds-barred brawl with Clinton — who, as the 2016 Democratic nominee, was the subject of “lock her up” chants at Trump campaign rallies — has certainly won her fans on the Right. Even Trump’s campaign has applauded her criticism of her own party.

Tulsi Gabbard is in an all-or-nothing campaign for president.

She is rising in the polls and remains standing as others who once appeared strong fall by the wayside. She faces long odds to secure the nomination, but that was also once true of Donald Trump.

Whatever comes to pass, since she appears certain to stay in the presidential race at least until July 2020, her association with the international Hindutva movement deserves deeper scrutiny.