Washington D.C.: As per an update by the Sikh Coalition [i]n a landmark decision on Thursday (March 3), a US Federal judge defended a decorated Sikh American soldier and ruled that the Department of Defense could not subject him to unfair and biased testing on account of his religious beliefs. The message from the court was crystal clear: the United States Department of Defense cannot discriminate and make up new rules to prohibit individual soldiers from serving in the U.S. military.

Earlier in the week, the Sikh Coalition, in conjunction with the Becket Fund for Religious Liberty and McDermott Will & Emery, sued the United States Department of Defense on behalf of Captain Simratpal Singh. The lawsuit demands that the U.S. military accommodate Captain Singh’s religious articles of faith and abandon the impromptu, discriminatory testing procedures imposed upon Captain Singh. 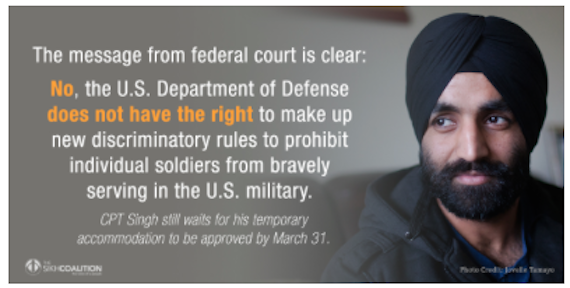 The testing that the military planned to impose on Captain Singh is not required of any other soldier, even the tens of thousands with medical or religious accommodations, and including previously accommodated Sikhs. Given that Captain Singh has passed the standard safety tests, further testing would clearly be discriminatory.

The United States Department of Defense, which had granted and then extended Captain Singh’s temporary religious accommodation until March 31, 2016, is scheduled to make a final decision on Captain Singh’s permanent accommodation by that deadline. Captain Singh, who is a West Point graduate, Ranger, and Bronze Star Medal recipient, has successfully passed the safety tests required of his unit.

“I have so much pride in my Sikh identity and service to my nation,” said Captain Singh last December after receiving his temporary accommodation. “To feel spiritually whole, while continuing my military career, has always been the dream.”