Washington, D.C.: The United States Commission on International Religious Freedom (USCIRF) yesterday (April 28) released its 2020 Annual Report, documenting significant developments during 2019, including remarkable progress in Sudan and a sharp downward turn in India, and making recommendations to enhance the U.S. government’s promotion of freedom of religion or belief abroad in 2020.

The US Commission has recommended to [d]esignate India as a “country of particular concern,” or CPC, for engaging in and tolerating systematic, ongoing, and egregious religious freedom violations, as defined by the International Religious Freedom Act (IRFA).

In its report, the US Commission has also recommended to the US government to “[i]mpose targeted sanctions on Indian government agencies and officials responsible for severe violations of religious freedom by freezing those individuals’ assets and/ or barring their entry into the United States under human rights-related financial and visa authorities, citing specific religious freedom violations”. 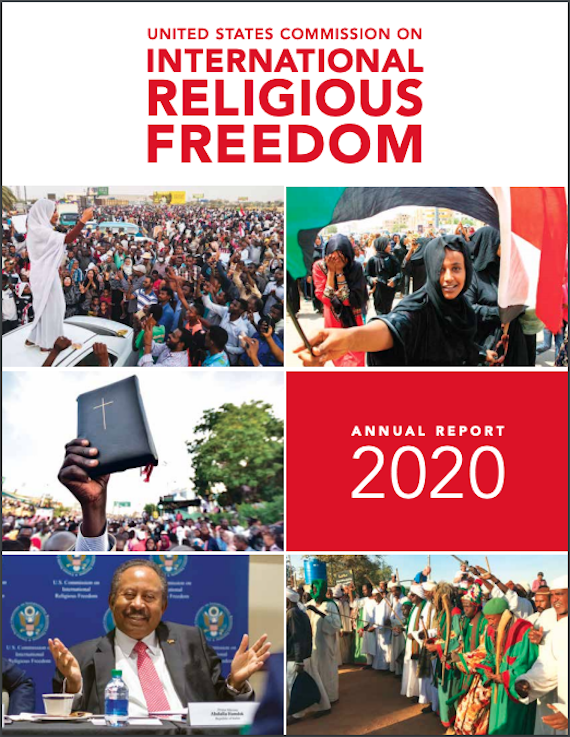 According to the report: “India took a sharp downward turn in 2019. The national government used its strengthened parliamentary majority to institute national-level policies violating religious freedom across India, especially for Muslims. Most notably, it enacted the Citizenship (Amendment) Act, which provides a fast track to Indian citizenship for non-Muslim migrants from Afghanistan, Bangladesh, and Pakistan already residing in India. According to government officials’ statements, this law is meant to provide protection for listed non-Muslim religious communities—but not for Muslims—against exclusion from a nationwide National Register of Citizens and the resulting detention, deportation, and potential statelessness. The national and various state governments also allowed nationwide campaigns of harassment and violence against religious minorities to continue with impunity, and engaged in and tolerated hate speech and incitement to violence against them. Based on these developments, in this report USCIRF recommends CPC designation for India”.

The US commission notes that “India’s constitution defines it as secular and protects freedom of religion or belief—including the right to proselytize. However, religious freedom is “subject to public order,” a vague phrase allowing the suspension of rights to protect social “tranquility.” This qualification was used to justify anti-conversion laws in the 1977 Supreme Court case Rev. Stainislaus v. State of Madhya Pradesh and Orissa”.

“The BJP has challenged the secular principles of the constitution by implementing policies reflecting Hindu nationalist ideology, or Hindutva”, the commission’s report notes.

The Citizenship (Amendment) Act and the National Register of Citizens:

On CAA and NRC the US Commission’s report notes: “In December 2019, parliament passed the CAA, providing a pathway to citizenship for non-Muslim migrants already in India from Afghanistan, Bangladesh, and Pakistan by treating them as refugees fleeing religious persecution. The CAA would be even more problematic in conjunction with a nationwide NRC, which could be modeled after the statewide NRC in Assam, and is a goal outlined in the BJP’s manifesto and repeatedly promised by BJP leadership. The NRC process in Assam raised significant concerns: impoverished families could not present the necessary documents due to poor record keeping or illiteracy. Even with documentation, citizens were excluded because of minor inconsistencies; some were excluded despite using the same documents as included relatives. The Foreigners’ Tribunals that adjudicate citizenship status have been critiqued for their anti-minority bias. In December, the Parliament approved an NPR to collect residents’ citizenship data. According to government statements and under the Citizenship Rules, 2003, the NPR—which allows residents to be marked as “doubtful citizens” and placed under scrutiny—is the first step toward a nation-wide NRC”.

On cow Slaughter Laws, the report notes: “In Hinduism, the cow is considered sacred. Article 48 of India’s constitution directs the state to “take steps . . . prohibiting the slaughter of cows and calves,” and 21 states criminalize cow slaughter in various forms. Cow protection has been promoted as a key issue by the BJP and the Rashtriya Swayamsevak Sangh (RSS). Lynch mobs, often organized over social media, have attacked minorities—including Muslims, Christians, and Dalits—under suspicion of eating beef, slaughtering cows, or transporting cattle for slaughter. Since the BJP came to power in 2014, there have been over 100 attacks, amounting to over 98 percent of such attacks since 2010. Lynching victims, rather than the perpetrators, are often arrested under these laws”.

“While the constitution protects the right to proselytize, 10 states have anti-conversion laws criminalizing conversion using force, allurement, inducement, or fraud, but many use vague language that can be interpreted as prohibiting consensual conversions. In 2019, BJP ruled Himachal Pradesh increased the penalties for forced conversions.

In September 2019, the Home Ministry introduced new rules under the Foreign Contribution (Regulation) Act requiring all members of nongovernmental organizations (NGOs) to sign an affidavit affirming they have “not been prosecuted or convicted for indulging in forced religious conversion or creating communal tensions” to receive foreign funding. Faith-based NGOs, in particular Christian organizations, expressed fear that this is intended to limit their activities”.

On Religious Freedom in Jammu and Kashmir

“In August 2019, the government stripped Muslim-majority Jammu and Kashmir’s autonomy and imposed security measures, including restricting freedom of movement and assembly, cutting Internet and phone access, and arresting Kashmiri leaders, including religious leaders. The restrictions on movement and assembly limited the ability to attend prayers and religious ceremonies. USCIRF also received several reports of mosques being closed, imams and Muslim leaders arrested and detained, and threats and violence by extremist groups”.

Two individual members of the US Commission on International Religious Freedom have written their dissenting note with regard to recommendation to label India as “country of particular concern” list.

Both members- Commissioner Gary L. Bauer and Commissioner Tenzin Dorjee, agree that the situation of religious freedom is deteriorating in India but they disagree with the commission’s recommendation to put India in the list of ‘countries of particular concern’.

Like previous years the Indian government was quick to respond to US commission’s report and recommendation about state of religious freedom in India.

Interestingly in its report, the US commission has itself noted in its report that: “U.S. officials highlighted concerns with India’s religious freedom violations through public statements, congressional hearings, and bilateral engagements. In October, U.S. Ambassador-atLarge for Religious Freedom Samuel D. Brownback traveled to India. The Indian government, however, continued to reject the State Department’s and USCIRF’s reporting on religious freedom violations in India.“