New Delhi: The Uttarakhand police on Sunday (May 14) arrested 25 Sikhs who were performing Ardas on the banks of Ganga river at Haridwar as a part of campaign by Shiromani Gurdwara Prabhandak Committee (SGPC) and Delhi Sikh Gurdwara Management Committee (DSGMC) to seek reconstruction of Gurdwara Gyan Godari. Out of these 25 persons, one is booked under sedition.

In a joint press conference on Tuesday (May 16) SGPC chief Prof. Kirpal Singh Badungar and DSGMC chief Manjit Singh GK termed the arrest of 25 Sikhs by Uttarakhand police as ‘unfortunate’ (mandbhaga). During this press conference SGPC and DSGMC said that the response to their campaign seeking reconstruction of Gurdwara Gyan Godari has got ‘historical’ response. 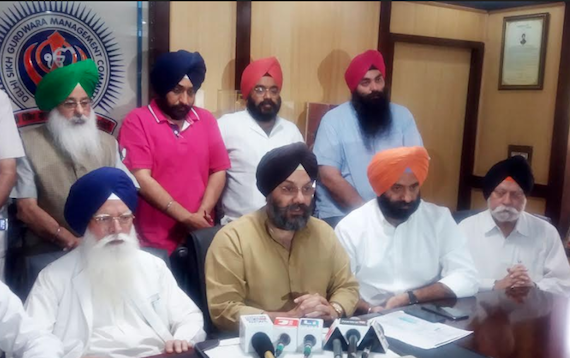 Prof. Kirpal Singh Badungar, Manjit Singh GK and others addressing media persons in Delhi on May 16, 2017

Manjit Singh GK said that a team of legal experts has reached Haridwar to find a way out for Joga Singh who is booked under sedition charges by the Uttarakhand police.

Notably, the Uttarakhand police have booked Joga Singh for ‘sedition’ under FIR no. 84/17 registered at Har Ki Pauri police Chowki on May 14. He was not yet release while other 24 Sikhs arrested with him were released on bail. The FIR says that Joga Singh raised slogans against Narindra Modi and Hindustan.