New Zealand: As per reports a volcano erupted in While island of New Zealand today, leaving one dead. According to the police the death counts are likely to rise.

A report by BBC notes that tourists were seen walking inside the rim of the White Island crater just moments before the eruption.

Police said 23 people had been rescued, but warned the number of dead was “likely” to rise. The area is currently too dangerous for a rescue operation, notes BBC report. 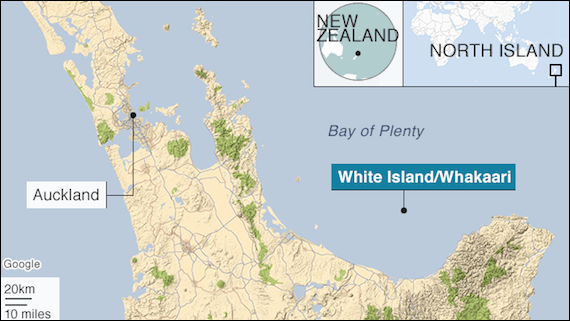 A report by Daily Mail notes that tourists have been travelling to White Island for years despite warnings from scientists that it could erupt at any time.

“Between 2011 and 2016 the volcano 50km north of New Zealand’s north island – which erupted injuring 20 on Monday – had a period of increased activity but still boatloads of tourists arrived on day trips”, notes Daily Mail.

Volcanologists at the time refused to step foot on the island because it was too dangerous and warned tourists not to go, the news report reads.

Notably, White Island, also known as Whakaari, is one of New Zealand’s most active volcanoes.

Despite that, the island is a tourist destination with frequent day tours and scenic flights available.