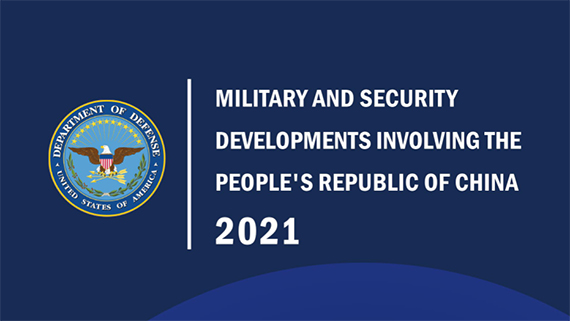 This report makes a special mention of the People’s Republic of China (PRC)-India border standoff, which reads (in verbatim) as follows:-

The Current State of Play. As of June 2021, the PRC and India continue to maintain large-scale deployments along the LAC and make preparations to sustain these forces while disengagement negotiations have made limited progress. Beginning in May 2020, the PLA launched incursions into customarily Indian-controlled territory across the border and has concentrated troops at several standoff locations along the LAC. In addition, a substantial reserve force from the Tibet and Xinjiang Military Districts were deployed to the interior of Western China to provide a rapid response. The June 2020 skirmish in Galwan Valley, which led to the deaths of 20 Indian soldiers, marked the first loss of life on the LAC since 1975. In February 2021, the Central Military Commission (CMC) announced posthumous awards for four PLA soldiers, though the total number of PRC casualties remains unknown.

Corps Commander Negotiations and Limited Disengagement. As of April 2021, PLA and Indian Army (IA) representatives have held eleven rounds of Corps-level negotiations since the beginning of the standoff in May 2020, consisting of meetings between the commanders of the PLA’s South Xinjiang (Nanjiang) Military District and the Indian Army’s 14th Corps. The negotiations have yielded limited disengagement at specific areas along the LAC. In addition to military negotiations, on 10 September, the PRC’s Minister of Foreign Affairs, Wang Yi, met with India’s Minister of External Affairs, Subrahmanyam Jaishankar, on the sidelines of the Shanghai Cooperation Organization Foreign Ministers’ meeting in Moscow. The two ministers released a plan, which has yet to be carried out, for resolving the dispute and expressed a desire to resolving the standoff peacefully while maintaining dialogue.

Competing Perceptions of the Crisis. Despite the ongoing diplomatic and military dialogues to reduce border tensions, the PRC has continued taking incremental and tactical actions to press its claims at the LAC. Sometime in 2020, the PRC built a large 100-home civilian village inside disputed territory between the PRC’s Tibet Autonomous Region and India’s Arunachal Pradesh state in the eastern sector of the LAC. These and other infrastructure development efforts along the India-China have been a source of consternation in the Indian government and media. In contrast, PRC has attempted to blame India for provoking the standoff through India’s increased infrastructure development near the LAC. Asserting that its deployments to the LAC were in response to Indian provocation, Beijing has refused to withdraw any forces until India’s forces have withdrawn behind the PRC’s version of the LAC and ceased infrastructure improvements in the area.

The PRC’s Current Objectives in the Standoff. As the standoff continues, the PRC has expressed its aim to prevent the standoff from worsening into a wider military conflict. Additionally, Beijing has voiced its intent to return bilateral relations with New Delhi to a state of economic and diplomatic cooperation it had perceived to be improving since the 2017 Doklam standoff. PRC state-controlled media forcefully asserted China’s intent to refuse any territorial concessions demanded by India. PRC officials, through official statements and state media, had also sought unsuccessfully to prevent India from deepening its relationship with the United States during and subsequent to the standoff, while accusing India of being a mere “instrument” of U.S. policy in the region.