New Delhi/ Chandigarh: Two persons were convicted yesterday (on Nov. 14) by a Patiala House trial court in Delhi in a case related to genocidal violence against the Sikhs in November 1984. The Indian court has convicted the accused after 34 years of the occurrence of crime. The conviction forms part of limited number of conviction of low profile perpetrators of genocidal violence against the Sikhs where as culprits of the 1984 Sikh genocide have largely enjoyed impunity under the state policy. 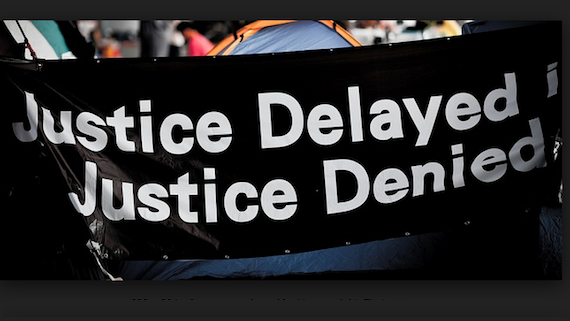 The case was related to killing of two Sikhs and injuring 3 more in Mahipalpur in south Delhi. The convicts, Naresh Sehrawat and Yashpal Singh, who were out on bail were taken into custody after they were convicted. The court will decide their quantum of sentence today (Nov. 15).

Holding the accused persons guilty, Additional Sessions Judge Ajay Pandey at the Patiala House Courts said, “The prosecution was able to prove beyond reasonable doubt that both accused persons took out the victims, who were hiding inside a room, injured them with dangerous weapons with the intention to kill and threw them down from the first floor, which caused the death of Hardev Singh and Avtar Singh.”

Notably, these persons are convicted for crimes of murder, attempt to murder and other offences under the Indian Penal Code and the Indian state did not frame any law to incorporate the punishment for the crime of genocide.

⊕ Details of the Incident:

“The mob looted goods from the house of Surjeet Singh, and shops of Sangat Singh, Kuldeep Singh and Hardev Singh [target of the mob], and set the house and shops on fire. At that time, accused Naresh Sehrawat, being part of the unlawful assembly, was also carrying a can of kerosene, which he poured over the door of the house and accused Yashpal lit a matchstick to ignite fire,” the judge added.

The case was investigated by a Special Investigation Team (SIT) set up by the Central government in 2014.

The charge sheet stated that on November 1, 1984, a violent mob of about 800-1,000 persons armed with deadly weapons like iron rods, lathis, hockey sticks and kerosene cans rushed towards three of the victims, who were sitting in their grocery shops. On seeing them, the victims rushed to a nearby house, owned by Surjeet Singh, on the first floor and locked themselves in a room. Later, Avtar Singh also hid himself in the room.

After looting the shops, the mob broke into the room, assaulted them and threw all the five Sikhs down, resulting in the death of Avtar Singh and Hardev Singh, the charge sheet said.

⊕ Indian Media Continues to Advance the Denial Policy of the Indian State:

The news reports related to conviction of Naresh Sehrawat and Yashpal Singh in a case related to 1984 genocide of Sikhs reveals that the Indian media continues to propagate the Indian state’s policy of denial. Media houses, including print and online Indian media, have used the term anti-Sikh riots to refer the 1984 Sikh genocide. The media reports continue to use such inappropriate terms while wilfully not using the term genocide to refer 1984 genocidal violence against the Sikhs in India. Notably, the Indian state denies the fact of 1984 Sikh genocide. Even prominent papers like The Indian Express and The Hindu have also use term “riots” for the Sikh Genocide 1984. Despite a message by the Akal Takht Sahib to refer the 1984 Sikh genocide as such even Punjabi vernacular Daily Ajit has used the “qatleam” (massacre) for the 1984 Sikh genocide. It is well established through research by genocide scholars that every genocide is followed by a denial. Genocide scholar Gregory H. Stanton terms denial and as eighth and never ending stage of denial.

⊕ Recognition for the fact of 1984 Sikh Genocide in Canada, USA and Delhi:

It is worth mentioning here that various state and city level authorities in Canada and the Untied States of America (USA) have officially recognised the fact of 1984 Sikh genocide. In 2015 the Delhi State Assembly in India also unanimously passed a motion to condemn the genocide of the Sikhs in India in 1984 but Indian media continues to snub this information. (READ MORE and ALSO READ a Copy of Sikh Genocide motion passed by the Delhi State Assembly in 2015).