New Delhi: As per reports emanating from New Delhi, the Delhi police has registered an FIR against Jawaharlal Nehru University Students Union (JNUSU) president Aishe Ghosh and 19 others for allegedly attacking security guards.

A police official said that the FIR pertains to allegedly attacking security guards and vandalising a server room on January 4 at 1 p.m. He said that a complaint was filed by JNU’s chief security officer and the FIR was registered on Sunday, January 5. 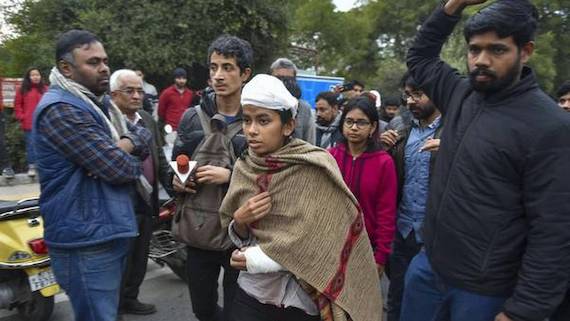 JNUSU president Aishe Ghosh with others

It is notable that in the evening of the same day masked goons, suspected to belong to the ruling BJP’s student wing ABVP, entered the JNU campus and beat up Aishe Ghosh, who suffered head injuries. Many other students were also injured in this attack.

An FIR for Sunday’s attack has been registered against unknown persons for rioting.

No arrests have been made despite the fact that the police were present when the attackers carrying sticks walked out of the JNU campus, notes a report in The Hindu.

Opinionists and Columnists have termed Sunday’s attack on JNU students as a big blot on India’s ‘reputation’ and ‘democracy’ while demanding an inquiry under the supervision of Supreme Court of India.