‘We Have Digested, Held In Our Bellies So Much Violence That It Is Hard To Be Moral’: Arundhati Roy

NewDelhi: On a late May afternoon, the maze of lanes around Jama Masjid is its usual swirl of orderly chaos, mildly exacerbated by a spot or two of unseasonal rain. Past Chitli Qabar, where her second novel, The Ministry of Utmost Happiness (Penguin, Rs 599), finds a foothold, past the hubbub of Al Jawahar, stands the Walled City Café and Lounge, where an interviewer  from an English vernacular meets Arundhati Roy.

It’s been a morning of ceaseless sound and fury on social media over actor and BJP MP Paresh Rawal’s tweet about using Roy as a human shield in Kashmir. But inside, there’s unusual calm. Roy is sitting in a corner, sipping a cup of kahwa, looking amused whenever she glances at her phone that is buzzing with alarming frequency. “TV stations,” she says, before tucking the phone back in her bag, unanswered.

Arundhati Roy has nothing to say to them, just as she has no defence against Rawal’s diatribe: “You know, when you do the work that I do and when I write the things that I write, I don’t think everybody will stand up and applaud. It’s part of what you do and you have got to just take it in your stride and not whine about it.

(But) I am not made of stainless steel. Of course, it bothers me, but when you look at the kind of violence that people are being subjected to, I am so protected. Look at what other people are going through. You have to look around at what’s happening to other people. You have to put yourself in perspective,” she says.

Where does a writer in search of a story go?

For Roy, whose new novel releases worldwide on June 6, it would be no further than the familiar landscape of turmoil that she embraced after her Booker Prize-winning debut The God of Small Things (1997) 20 years ago. The Ministry of Utmost Happiness is situated squat in the middle of the casual violence that has become so entrenched in contemporary Indian life — in Chhattisgarh and in Kashmir, but also in New Delhi and Ayodhya, in Godhra and in Bhopal.

Just days before the interview (to be published in The Sunday Express on June 4), the photograph of a blood-soaked Mohammed Naeem, begging for his life before he was lynched in Sobhapur in Jharkhand on the suspicion of being part of a child abduction gang, had made it to national news. But, Roy, 55, is no longer surprised by this pattern of recurrence. “I think the real danger in our society is that we have digested and held in our bellies so much violence that it becomes hard to be moral,” she says. 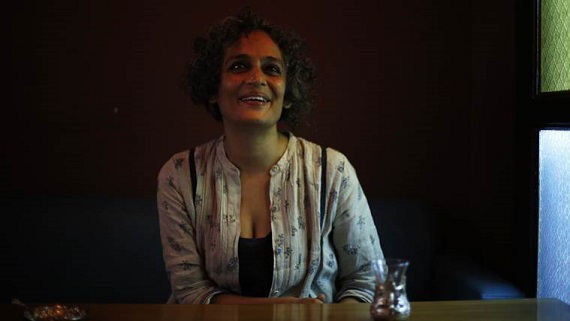 The author of ‘The God of Small Things’ Arundhati Roy. She has her upcoming book ‘The Ministry of Utmost Happiness ‘ .On Monday, May 22, 2017. Express photo

For Arundhati Roy, the personal has always also been the political. In her debut novel, she had deplored how there are far too many men and women “without curiosity, without doubt”. She has never been one of them, having never shied away from taking sides or asking questions of authority.

In essay after fiery essay, protest after protest, Roy has questioned successive governments on policies on environment, nuclear armament, the building of dams; she has spoken out in support of insurgents in Kashmir and Chhattisgarh time and again, inviting severe criticism. In 2010, she was charged with sedition for her controversial remarks on Kashmir while speaking at a conference in Delhi. “I think that when we become a society in which school girls have got stones in their hands and women in forests have guns in their hands, we have to ask ourselves, ‘why’, because it takes a long, long journey to push women into that place,” she says.

In her essay, ‘The Greater Common Good’ (1999), on the Narmada Bachao Andolan, Roy wrote, “There’s a hole in the flag that needs mending. It’s a sad thing to have to say, but as long as we have faith — we have no hope. To hope, we have to break the faith.” If her essays document her broken faith, her fiction is what teaches her readers the importance of healing and of being still. Her characters are full of frailties, but they are also resilient in the way only the broken can be.

She builds them up with care, layering their universe with an architect’s precision (Roy is a trained architect). “I keep thinking that there cannot be a better thing to study if you want to write than architecture. To me, writing, especially a novel, but even in the essays, the structure is almost like a drawing in my head. But in a novel, it’s like mapping a big building complex or a city. How a story is told is almost more important than the story, or, anyway, as important. A great deal of pleasure goes into that for me,” she says.

Now that it’s going out in the world, will she miss it? “Well, who can say! It was my constant companion. Of course, sometimes, I was doing other work which involved a lot of research, but this was always there, you know, I would always sort of salaam karo it almost every day,” she says.

Note: The above content was originally published in the Indian Express (IE) newspaper under the title of ”we have digested and held in our bellies so much violence that it becomes hard to be moral,” and is based upon the interview of Arundhati Royin which has shared er opinion upon the ongoing struggles in the sub continent and prevalent fascist scenario in the society. It is reproduced for the information of the readers of Sikh Siyasat News (SSN).