Dismiss Punjab Government due to breakdown of Constitutional machinery, Aam Aadmi Party to President of India 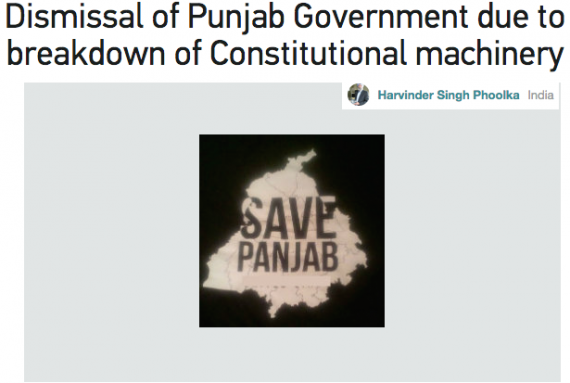 Following text is verbatim reproduction of the concerned petition:

SUBJECT: Dismissal of Punjab Government due to breakdown of Constitutional machinery

In the matter of Madhya Pradesh Special Police Establishment Vs. State of Madhya Pradesh AIR 2005 SC 325, the Hon’ble Apex Court highlighted the role of the Governor of a State in ensuring the constitutional framework in a state for which he ought to be allowed to work completely independently. The same was reiterated in Rameshwar Prasad Vs. UOI (2006) 2 SCC 1 where the Hon’ble Supreme Court stated that where the Governor finds that a situation has arisen in which the Government of a State cannot be carried on in accordance with the Constitution, he must make a report to that effect and can also recommend President’s Rule.

Today in Punjab there is a complete breakdown of constitutional machinery. The provisions of the Constitution and the Law of the Land are being openly flouted by the Chief Minister, Prakash Singh Badal and his son Deputy Chief Minister Sukhbir Singh Badal purely to further their business interests and illegal financial gains. In a somewhat similar situation, where the Chief Minister of the State of Maharashtra had grossly misused his official position, the Hon’ble Supreme Court of India in State of Maharashtra Vs. Sarangdharsingh Chavan and Anr. (2011) 1 SCC 577, expressed extreme anguish at the incongruous actions of the Chief Minister and burdened him with a cost of Rs. 10,00,000/- to go to poor farmers.

The people of Punjab, and right-thinking citizens all over the country and abroad have been outraged and greatly pained by the appalling incident of the molestation and murder of a 13 year old girl in the Moga district of Punjab. What makes the incident all the more revolting is the direct admitted involvement of the Chief Minister and Deputy Chief Minister of Punjab.

There have been unfortunate incidents in the past about rapes and molestations of women in this country that have left the country in shock, however never before has there been such direct involvement of the highest functionary of the State. The people of Punjab have been enduring and tolerating this Government for a while now, but this incident has highlighted the utter disregard for life and liberty by the Chief Minister himself.

In brief, on 29th April 2015 a 13 year old girl and her mother and brother were travelling on a bus in the Moga district of Punjab. The conductor and cleaner of the bus began molesting the mother-daughter duo and passed lewd comments and gestures. On the protest of the young girl, the driver picked up speed, and the mother and daughter had to jump from the running bus to save their dignity. The young girl died instantaneously and the mother has received serious injuries and is currently recuperating.

The incident has led to uproar in the state of Punjab with people taking to the streets. The reason for this is clear. Orbit Aviation and their associates owns nearly all the buses plying in the State. This has not happened as a matter of chance but the Chief Minister used his position to wipe out other transport companies from the scene. As a result of the monopoly, the people have no choice but to use these “killer buses” which have a long history of breaking rules and killing hapless people, the last incident being in April 2014 when a 55 year old man was mowed down by an Orbit bus [Times of India, April 1, 2014]. The incident led to a ‘Bandh’ in the city, but no action was taken. It is common knowledge that staffers of the Orbit buses owned by the Badal family violate all traffic rules with impunity and no one dare touch their employees. The staff of Orbit Aviation buses force people off state owned buses and forcefully make them travel by Orbit buses, for which they have goons who operate at different bus stands across the state [Mail Today, May 1, 2015]. In April 2014, a staff of Orbit Aviation had also “hijacked” a state owned Pepsu Road Transport Corporation bus for which an FIR was registered but nothing happened [Times of India, April 23, 2014]. Inspite of these incidents being widely reported in the media and their being such hue and cry in the public, no official can dare take action against Orbit due to its lineage with the Badal family.

Despite the gravity of the present incident, the Punjab Police is taking no action on the FIR and have simply arrested the Bus Conductor and cleaner to silence the public. No case against the company is being registered and no responsibility is being fixed. The Police has taken the thumb impressions of the father and mother of the girl on blank papers.

It is a matter of record that other than Orbit Aviation, the Chief Minister runs various other businesses in the State, mostly of daily necessities, where he misuses his position to ensure monopolization and kills all competition, leaving the people of the State with no option but to be at his mercy.

It is thus apparent that the Chief Minister of Punjab is running the state as his private business, where his priority is making money for his and his family’s benefit by misusing his official position. And that too at the cost of the people of Punjab whose life and liberty are at risk every day. At the worst danger are the weaker sections of society being women, children and SC/ST’s. This incident of the murder of a 13 year old Dalit girl by Badal’s employees throws light on the deplorable condition of the State. It is clear that there is complete breakdown of the constitution machinery in the state.

The following points would demonstrate that the Chief Minister and the Deputy Chief Minister, their entire Government machinery and the Punjab Police are purely working to further the personal and the business interest of Chief Minister Badal, in total violation of law and provisions of the Constitution :

1. The DGP of Punjab, Sumedh Singh Saini has openly stated in the media (as reported in front page of Indian express, May 1 2015) that questioning of the owners of Orbit Aviation Pvt. Ltd. including Sukhbir Singh Badal is completely ruled out.

2. In two recent cases, of the Nirbhaya murder and Uber taxi services case, the owners of the transport companies were held to be equally responsible for the crime. But in the present case the Punjab Police is working only to protect and shield the Chief Minister and his family.

3. In Abhishek Goenka Vs. Union if India, WP(C) 265/2011, the Hon’ble Supreme Court has clearly held that the kidnapping and sexual assault on women is on the rise and a major contributory factor of such increase is the use of black films on windows/windshields of vehicles. In the present case, the windshields of the bus were tainted black and the rear back window of the bus was also completely blocked. The owners are totally responsible for this and should be held liable for the crime committed in the bus.

4. It has been reported in the media that the driver of the bus didn’t have a valid license, which makes the owner directly responsible.

5. It has also been reported that the bus did not have a Permit. This also makes the owner directly responsible.

6. Inspite of clear liability of the owner Chief Minister Prakash Singh Badal, Deputy CM, and the Union Minister Harsimrat Badal who are all the owners/Shareholders/Directors of the company Orbit Aviations Pvt. Ltd., the Police instead of booking the guilty is working day and night to shield them.

7. It has also come to light that the Police in plain clothes and the Government functionaries are pressurizing the victim’s family to not to pursue the case.

9. This kind of interferences and pressurizing of the victim’s family and witnesses is sufficient ground to arrest the owners and keep them in a jail. Sadly, the Police is behaving like a servant of the Badal family.

10. A reign of terror is spread throughout the State. Police men in plain clothes have been deputed to guard the buses of chief ministers family.

Sir, as the highest Constitutional functionary in this country, you have the bounden duty to uphold the constitutional mandate and the rule of law. All the citizens of this country are equals and where their life and liberty is in grave danger in the hands of a person running his private businesses under the camouflage of a Government, and in the process killing and raping women, it is paramount that you interfere and sustain the rule of law. Continuation of this Government till 2017 will create havoc in the State.

Sir, there has been a complete constitutional breakdown in Punjab. People are out on the streets, for no one is safe anywhere. The Constitution of this great country guarantees Right to life, liberty and dignity to each person, and there lakhs and millions of people are in extreme danger at the hands of the Government. The need of the hour is that your goodself kindly call for a report on the matter from the Governor of the State of Punjab. It is apposite in the given circumstances to dismiss the Chief Minister Prakash Singh Badal and his Government and the Council of Ministers in Punjab.