New York, NY: In a game-changing move, FIBA, the world governing body for basketball, unanimously approved a new rule Thursday that will lift its ban on observant Sikhs and others wearing religious head coverings. For three years, the Sikh Coalition helped lead an advocacy campaign to fix a FIBA policy that forced observant Sikhs off the court in international competition.

“There is zero conflict between my faith and my ability to play basketball,” said Darsh Preet Singh, the first turbaned Sikh basketball player in the NCAA. “I am grateful to the Sikh Coalition for collaborating with other advocacy groups and lawmakers to score a win for civil rights. FIBA’s new rule will allow athletes across the world to pursue their dreams without compromising their faith.” 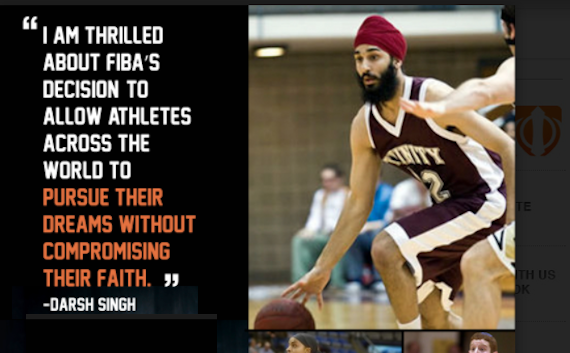 “Since 2014, the Sikh Coalition and grassroots supporters worked to put pressure on FIBA to change its policy. From placing op-eds and news stories, to working with congressional offices on multiple advocacy letters, we helped build a groundswell of public support for equal opportunity. Thursday’s announcement will officially go into effect in October 2017”, reads a release by the Sikh Coalition.

“FIBA is sending a very clear message to the rest of the world that diversity and tolerance matter in sport,” said Sikh Coalition Senior Religion Fellow Simran Jeet Singh. “If implemented appropriately, ending this discriminatory policy opens the door for millions of young people to practice their faith and pursue their dreams. Nobody should ever be forced to choose between their sport and their faith.”

In addition to opening doors for Sikhs across the world, the new policy lifts restrictions on Jews, Muslims and other religious groups.

“The decision from the International Basketball Federation to allow Sikhs and other players to wear articles of religious faith while competing is welcome news,” said U.S. Reps. Joe Crowley (NY) and Ami Bera (CA) in a joint statement. “It has been a long campaign to make this a reality, and praise should go to FIBA and the Sikh community — they both helped ensure that Sikhs can compete just like anyone else.”