With connivance of Badal-BJP ruling alliance, Hindu extremist organizations, motivated by their inherent hatred, are wildly active in hurting feelings of Sikhs. So many events have happened in past few weeks that indicate towards rise in this trend. Whereas Sikh organizations are working in cautiously in democratic way in order to recognize their struggle for maintaining separate and unique Sikh identity, without giving any opportunity to anyone to nail them; the Hindu extremist organizations are proactive in committing provocative assaults on Sikhs.

Sikh organizations seem to be willing to further their cause in most possible uncontroversial way; as controversies provide opportunities to the State to crush them. But the Hindu organizations, that are struggling even to prove their negligible existence, use more provocative tactics. 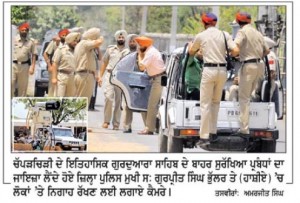 Many Gurudwaras were surrounded by the Police and many others were turned to be “Police Camps” to prevent Holocaust Memorial March. Even Sikh devotees were prevented from entering Gurudwara on 1 June 2010 at Chapparchiri at Mohali.

Last week Hindu organizations were successful in their designs to prevent Sikhs from organizing ‘Holocaust Memorial March’ to observe 26th anniversary of armed attack on Sri Darbar Sahib Amritsar (in 1984), which is recognized by Sikh masses as the beginning of third holocaust of Sikh history. Many Hindu extremist organizations, including newly formed Hindu Takht Organization, Shiv Sena (Hindustan) and Hindu Surakhsha Samity issued a warning to the Punjab Government that in case the Government failed to prevent the ‘Holocaust Memorial March’, these Hindu outfits would themselves prevent the march at any cost. As the march was to remember those Sikhs, who laid their life for Sikh cause; Hindus opposed it. This march was later banned by Punjab Government, which asserted that the organizers, i.e. Shiromani Akali Dal (Panch Pardhani), supports the ideology of Khalistan, thus it can not claim any democratic right in India. Ban was hailed by Mahasha Press as a “historic step”.

On the other hand on 5 June so-called Hindu Takht Organization placed a highly provocative hoarding at Ludhiana glorifying Former Indian Army Chief, Arun Vediya, as a hero. The date,  June 5, coincides the date of armed attack launched by Indian Army on Sri Darbar Sahib. Moreover highly disgraceful language was used for Sikhs killed by Indian army during June 1984, as they were termed as “terrorists” and “dariney” (evils and monsters). On 6 June, 2010 various Hindu organizations, in order to hurt feelings of Sikhs held functions to celebrate the (so-called) victory achieved by Indian Army in “Operation Blue Star”, army code name for attack on Sri Darbar Sahib. Ramayan Paaths were held by Hindus to pray for Army Men killed during attack on Holiest of Sikh shrines. It is notable that this attack (in 1984) was widely celebrated by Hindus, who distributed, in joy and happiness, sweets and intoxicants among Army personnel who killed thousands of innocent Sikh pilgrims in Darbar Sahib (Golden Temple) complex. 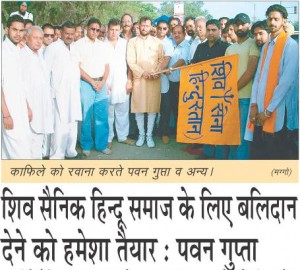 Pawan Gupta of Shiv Sena (Hindustan) flagged clear a march, on 5 June, 2010, by Hindu extremists from Mandi Gobindgarh to Amritsar to participate in functions to be held there, by Hindu organizations to celebrate the 26th anniversary of OBS. While talking to media persons, as per reports of Mahasha Press, Pawan Gupta called Shiv Sean workers to remain ever ready to give any sacrifice for Hindu Samaj (society). He said that Shiv Sena and Hindus would oppose any memorial for Sikhs killed by army during ‘Operation Blue Star’. He said that those killed by army were “terrorists” and “killer of Hindus”.

Hindu Organizations announced to recruit Hindus for their armed force, called Hindu Dharma Raksha Vir – A news clip from a Hindi Daily in this regard.

In a similar function held by Hindu Takht Organization (HTO) at Patiala, Sanjeev Hari, Mahamandleshwar of HTO announced that Hindu extremist from 1 July onwards HTO and other Hindu organizations would recruit 1000 Hindus, in every district of Punjab, as Hindu Rakhsha Veer (Hindu Security Personnel). He said that special training would be provided persons, so recruited.

Now, another provocative announcement is made by HTO that it would observe death anniversary of General Arun Shiridhar Vaidya, former chief of Indian Army, who led the Army during June 1984 attack on various Sikh Gurudwaras, including Sri Darbar Sahib (also known as Golden Temple, Amritsar) on 10 August 2010.

It is noteable that Badal-BJP alliance is more active in preventing Sikhs from holding public activity but is actively and continuously conniving at disruptive activities of these Hindu organizations.

No incidence of violence or threat of violence against Hindus is recorded in Punjab since many years but Rajiv Hari (HTO) maintained that it is necessary for Hindus to keep their own force (Hindu Dharma Rakhsha Veer) as the Government has failed in protecting life, liberty and property of Hindus in Punjab. He denounced any faith in State’s security forces and announced that about 20,000 persons shall be recruited by his organization, to whom special training shall be provided.

All these developments indicate towards ever-present ethnic conflict in Punjab. Vested interests of Badal-BJP alliance in suppressing peaceful and democratic activities of Sikhs and allowing Hindu organizations like HTO, Shiv Sena and Hindu Surakhsa Samity to continue with their disruptive activities would further deteriorate the situation, because ethnic conflict between Sikhs and Hindus is not a phenomenon, which could be used for political interests. Such ethnic conflict is inherent in group psyche of both the communities and its roots lies in historical hatred between Sikhs and Hindus. Opposition offered recently by India Canada Foundation, to petition moved in Canadian Parliament, seeking recognition to Sikh Genocide (1984), is another outcome of such historical hatred.