Amritsar: On Friday (Jan. 3) a group of local Muslims pelted stones at Gurdwara Nankana Sahib premises. They were reportedly led by the family members of a boy whose marriage with a Sikh girl had triggered controversy few months back. 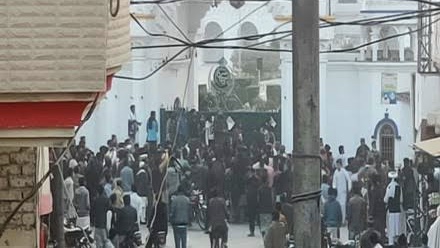 A view on Friday’s (January 3) incident

Local sources told Sikh Siyasat News that the police controlled the situation and no one entered to the Gurdwara Sahib complex. The Pakistani administration became active and controlled the disturbance.

Imran Gondal Deputy Secretary Shrines ETPB Govt of Pakistan said: ‘An unfortunate incident of protest demonstration was held by relatives of Hasaan Zulfiqar local of Nankana Sahib who has recently married a Sikh girl[…] Jagjit Kaur‘. Jagjit Kaur (presently in Darul Aman) is appearing in Court on 8 January to record her statement.

“Police dispresed the protesters who were demanding release of their relatives arrested by police to send the girl back to Sikh family from Darul Aman. No person entered in Gurdwara and routine religious activilties are continuing. Its our prime duty to look after and protect Gurdwaras and nobody can create difference among Sikh and Muslims in Pakistan. We love and respect our Sikh brothers” said he.

“I was involved in controlling the situation. All those who tried to spoil the love and respect created among Sikh and Muslim in Pakistan will be dealt with iron hand”, he added.

Global Sikh Council President Dr Kanwaljit Kaur, said “We are saddened that a few mischievous individuals exploited their own personal grievance and tried to create a rift between the peacefully living communities. We are delighted and thank the Pakistan Government for taking a swift action in controlling the situation and stopped the mindless violence against people and property”.