During his interaction with the media, leader of opposition in Punjab assembly Sukhpal Singh Khaira said that during the last government, Bains brothers had raised the issue of sharing Punjab water with Rajasthan, Haryana and Delhi and the Vidhan Sabha had then passed the resolution unanimously to demand royalty from these states.

“From then onwards no action has been taken in this regard and AAP and LIP has decided to push the matter by holding peaceful protest.” said Sukhpal Singh Khaira. As per the international riparian law these states have to pay the royalty of water they have been using, he further adds. 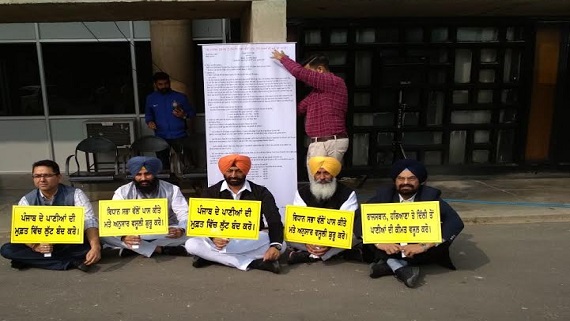 The president of Lok Insaaf Party, Simarjeet Singh Bains said that since 1965 Punjab has been sharing more than 12 million acre ft water with Rajasthan that amounts to more than Rs. 16 Lakh crores but no government has ever bothered to put up this issue with these states.

On 16th of November 2016, a private resolution was moved by LIP MLAs in Vidhan Sabha that even got the nod of Vidhan Sabha member but no communication has been made with the states after that. He said that a Signature campaign will be started soon to know who all Punjab MLAs and MPs are in favour of this resolution, he adds.

AAP’s Vice-Chief Aman Arora said that the Punjab state owe Rs. 1 Lakh debt on it so if the state get all the money that is pending to these state then the state can flourish and can again be ‘Sone di Chiri’. Further he said that chief minister must look into the matter and ask these states to pay the money on earliest. Punjab has just water on the name of natural resource so if other states can charge for their natural resources what is wrong in Punjab demanding money as per the riparian law, he adds.