London, England: Days after publication of a media report in an English vernacular published from Chandigarh (India), the Sikh Federation UK – an organisation of Sikhs in England, has accused Indian media for making desperate attempts to undermine the Sikh demand for separate identity column in British census.

A release issued by the Sikh Federation UK is being reproduced as follows for the information of readers of the Sikh Siyasat News (SSN):

In recent days an article has appeared on the front page of The Tribune titled “100 MPs back non-Indian ethnic category move for Sikhs” written by Ashis Ray a journalist well known to be very close to the Indian High Commission. Some will recall he also wrote a front page article earlier this year on 25 January 2017 titled: “Khalistan leader potential flashpoint in India-UK ties”. The article in January exposed the Indian authorities and intelligence agencies anti-Sikh activities in the UK and came within a few days of the successful launch of KTV (Sky 858) a new Sikh TV channel that is closely associated with supporters and leading figures in the Sikh Federation (UK).

The latest article continues along similar lines and smacks of desperation by pro-India media contacts as lies are again peddled about the Sikh Federation (UK), prominent Sikhs like Dabinderjit Singh OBE and also demonstrates a paranoia by needlessly bringing in the Khalistan issue to cause turmoil. The article however falls short of taking a swipe at the two newly elected Sikh MPs.

The biased nature of the article is clear from the outset with a well known divisive tactic of using innuendo and scaremongering by describing the Sikh Federation (UK) as the “successor to a hitherto banned pro-Khalistan group”. The Sikh Federation (UK) was set up in September 2003 and has successfully lobbied and campaigned for Sikh rights for 14 years despite the Indian authorities exerting considerable pressure and has just held a very successful 15th National Sikh Convention at the weekend where both newly elected Sikh MPs spoke.

If the Sikh Federation (UK) was simply the successor body to the ISYF that was proscribed in March 2001 the UK Government would have taken legal action and imposed a ban. Ashis Ray obviously must think readers of The Tribune are naïve and fails to point out in the UK if a banned organisation is simply renamed the law stipulates the organisation remains proscribed. The UK Government has on at least eight occasions laid a name change order to confirm newly named organisations remain proscribed.

The Sikh Federation (UK) is in its 15th year of operation and the UK Government has responded to the Indian authorities demand for it to be banned by publicly stating there is no basis to curtail the lawful activities of the organisation. In recent years the UK Government has realised it is impossible to ignore the Sikh Federation (UK) due its following, support and profile and now regularly invites its representatives to meetings and events.

The article deliberately mentions early on the International Sikh Youth Federation (ISYF) was banned by the British government in 2001 under the UK Terrorism Act, but fails to mention until much later that the ban was lifted on the ISYF around 18 months ago. Ashis Ray knowingly tries to make mischief by stating: “Theresa May, now prime minister and then home secretary, lifted the proscription on the ISYF/SFUK” knowing full well the Sikh Federation (UK) has never been proscribed. With the ban lifted on the ISYF in the UK and all restrictions removed across Europe an organisation for the Sikh youth can be revived at any time under the ISYF name if and when required and it would co-exist with the Sikh Federation (UK) that has developed its own separate strong brand through years of successful political lobbying. 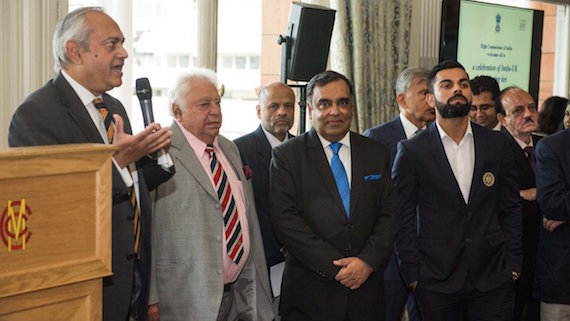 Ashis Ray admits the Indian High Commission in London is silent on the Sikh ethnic tick box issue for the Census 2021 but speculates on the Indian government position in New Delhi and like a broken record returns again to the often trailed line of “serious impact on bilateral relations between India and Britain”.

The silence from Indian government representatives in London recognises the Sikh community has considerable cross-party support on this issue from law makers in the UK, including those who are pro-India and have added their signatures to the ONS letter. They know UK MPs will not look kindly on direct interference from India regarding how to conduct the UK census and are therefore using pro-India media contacts and others to try and muddy the waters.

Preet Kaur Gill, the Labour MP for Birmingham Edgbaston and Chair of the All Party Parliamentary Group (APPG) for British Sikhs in a press release after she met the Office for National Statistics (ONS) last Tuesday said that:

“The number of MPs signing the letter (around 140) could easily have been doubled or even tripled as there is universal support for Sikhs on this issue.”

Ashis Ray has also tried to belittle the APPG for British Sikhs by stating it was “virtually defunct until revived in July”. But at least he accepts the revival is primarily down to the two new Sikh MPs.

Like his January article he then turns his focus on trying to malign Dabinderjit Singh, the principal adviser to the Sikh Federation (UK), by describing him as an “assiduous Khalistani activist” and stating he had been recently filmed at a Gurdwara advocating violence.

They are again scraping the barrel and spreading lies about Dabinderjit Singh as he is one of the most respected and senior professionals who stands up for Sikh rights and is a constant thorn in their side. Our simple advice to them is put up or shut up by handing any evidence they have over to the police. We have every confidence they will tell them they are wasting police time.

You would expect die-hard supporters of the Indian regime to make mischief and misleadingly play the Khalistan card but not the Network of Sikh Organisations (NSO). The longstanding “one and only NSO Director for life” seems to be bizarrely siding with the Indian authorities in not wanting a “Sikh” ethnic tick box and favouring the existing “Indian” box. He is showing his desperation and true colours as he realises he is losing his monopoly as the lone and authoritative voice of the Sikhs. He is deluding himself if he thinks no other Sikh needs to be consulted on Sikh matters. His problem is we now have two democratically elected Sikh MPs in touch with the grassroots, who are also much younger, talented and in a short time have developed a higher profile.

The article downplays support from around 140 MPs irrationally arguing that this is not a majority in Parliament. It also dismisses the 83,362 Sikhs who in 2011 ignored the existing ethnic tick box options in the census and used the write in option to state their ethnicity as Sikh by perversely focusing on Sikhs that used the existing boxes.

The article nervously concludes the ruling Conservative party is unlikely to support such a move knowing previously the Conservatives, including Theresa May were very supportive when in opposition and a number have signed the ONS letter. However, one thing is very clear they are undoubtedly worried Sikhs may be on the brink of a major achievement judging by their reaction.