London, UK: The Sikh community of UK has recently deliberated on the issue of protocol for conducting Anand Karaj at Sikh Gurdwaras in UK. At the Gurdwaras meeting on 23rd August 2015 a number of resolutions were unanimously agreed.

As a follow up of the meeting the Sikh Council UK has issued an advisory to Gurdwaras across UK. 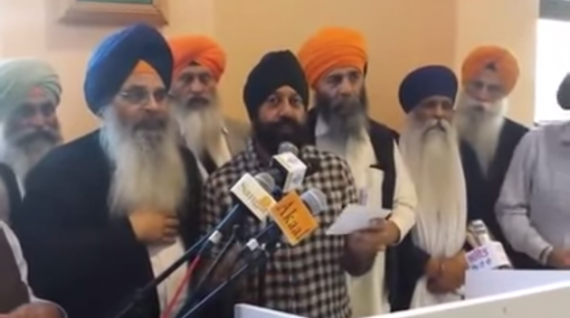 Sikh Council UK Secretary General Gurmel Singh said that the procedured detailed by the Sikh Counicl UK are advisory in nature and each Gurdwara can adapt and adopt those procedures as per their local conditions or convenience. He said that the meeting of Gurdwaras was held in association with Federation of Sikh Organizations (FSO) and Gurdwara Sri Guru Singh Sabha, Soughtall.

The resolutions passed during August 23rd meeting are detailed below with additional clarifying information, as provided by the Sikh Council UK:

1.That all Sikhs, whether those involved in Gurdwara Management or those who have been involved in protests are ultimately working to achieve the same ends.

It is important that we have unity in the Panth and do not set up artificial divisions of ‘them and us’. We need to work together and collectively respond to the issue and in doing so be sensitive to the feelings of individuals and families. We also need to have regard for the pressures on Gurdwara committee sewadars and the intentions behind the protestors campaign.

It is important that this is complied with for consistency and where the non-Sikh partner does not wish to follow the Sikhi path then efforts should be made to encourage the Sikh partner to retain contact with his/her Sikh heritage and for the couple to bring up their children as Sikhs, teach them Panjabi and for them to be welcomed to access services of the Gurdwaras and Sikh organisations. We must all try to avoid hurt feelings and alienation from Sikh heritage.

3. That a person of non-Sikh origin who chooses the Sikh faith should demonstrate formal acceptance of this by including Singh or Kaur in their name.

Essentially this means that after careful considerable and some understanding of Sikhi if the non-Sikh partner wishes to adopt the faith then they would need to change their name by deed poll and then change it on official documents e.g. passport and/or driving licence. One of these documents would serve to confirm their commitment. They would then sign a declaration and be invited for a blessing Ardas. The Anand Karaj can take place freely after that and there should be no protests.

4. All those communities which have a historic tradition of following tenets of the Sikh faith and regularly engage in religious ceremonies and contribute to the Gurdwaras will continue to be accepted for Anand Karaj Ceremony without question.

This is an important resolution which recognises these Sikh families. Many of them are of Sindhi and Panjabi backgrounds. For generations and over many years in the UK these families have maintained links with Gurdwaras and their ceremonies at birth, death and weddings all revolve around Sikhi. Therefore, they as Sikhs are welcome to continue with their Sikhi practice and their Anand Karaj are not an issue.

5. Gurdwaras agree that there should be processes, procedures and resources in place to support couples towards understanding basics of Sikhi, significance and protocols of Anand Karaj and Grist Jeevan prior to Anand Karaj booking being confirmed.

These two resolutions are interrelated and will lead to processes being put into place for booking Anand Karaj and then for support to the couple to become aware of basics of Sikhi, the Anand Karaj Ceremony protocols and living a successful Grist Jeevan. It will take some time to produce high quality educational materials for the couples and in the meantime Gurdwaras will endeavour to provide support through conversations and signpostingtomaterials. TheSikhMissionarySocietyandBasicsofSikhiaretwo potential resource access points. The process of production of the educational materials will begin within the next two weeks.

7. Those who are involved in protests at Gurdwaras are requested to refrain from any further protests for a period of six months to allow for Gurdwaras to review their bookings, put procedures in place as well as access and implement educational resources.

The intention is that Gurdwaras use the next six months to review their bookings, set processes in place etc. In the meantime the Sikh Council UK will endeavour to provide support and guidance on a case by case basis. We will also work closely together with all parties to diffuse tensions, clear up misunderstandings and involve those interested towards production of the educational materials.

Two simple flow diagrams have been produced to assist Gurdwaras and the declaration has been further refined. These will also be available from the Sikh Council UK website and we would encourage Gurdwaras to adapt these for their purposes and make them available on notice boards and their own websites.