Geneva: Movement Against Atrocities and Repression (MAAR) and all European Sikh and Kashmiri organizations and Gurdwara Management Committees held a massive protest rally and raised the freedom for all flag in front of the United Nations office in Geneva on Thursday, August 15th from 12:00 to 16:00 hours. 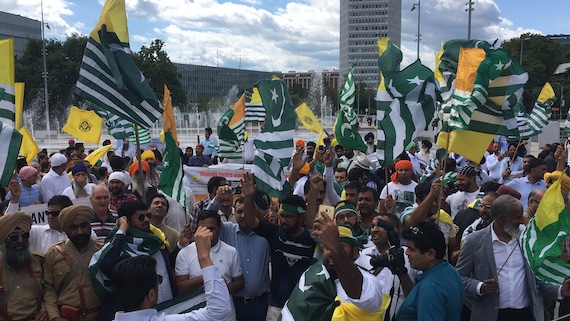 According to the organisers more than a thousand Sikhs, Kashmiris, and moolnivasis joined in the Rally outside the United Nations Headquarters in Geneva to stand in solidarity to condemn and educate on the continued repression of religious minorities in India and the revocation of the special political status of Kashmir (Article 370 and Article 35A). 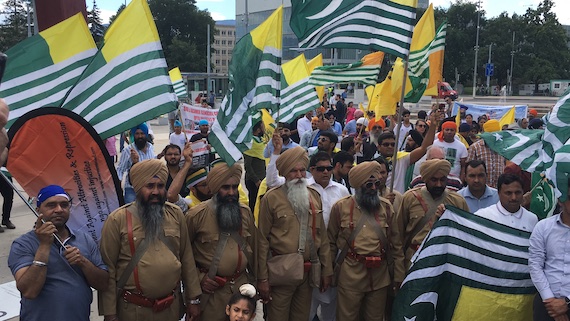 “Everyone in attendance stood in solidarity to oppose the continued abuse and killings of Sikhs and Muslims who have been subjected to state violence”, reads a statement issued by MAAR (copy available with Sikh Siyasat News).

At 12:30 pm hundreds of Sikhs and Kashmiris held a protest march from the Hotel President Wilson to the head quarters of the United Nations. 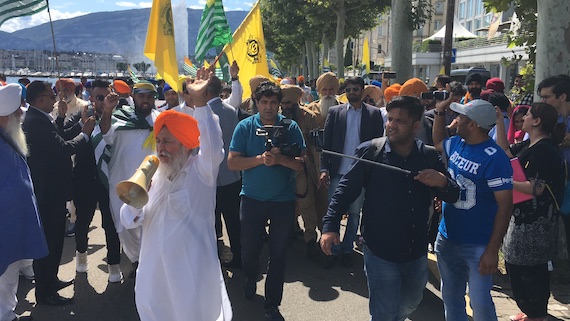 According to the organiser, Mr. Harminder Singh, the purpose of the March was to unite communities to support equality for all and to collectively condemn Human Rights violations against minorities in India.

“It was the first time in the history of Sikhs in Switzerland that they were permitted to March on the street to the UN head quarters”, he added.

There was a large police and security presence who cooperated with the protesters resulting in a successful and peaceful event. 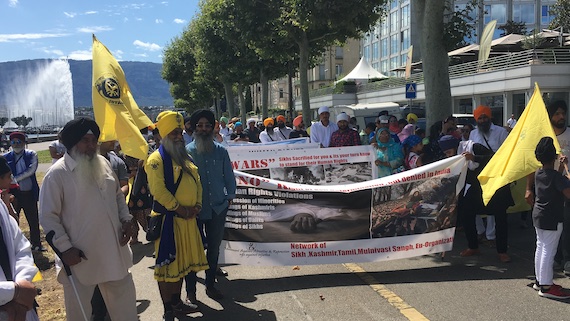 Hundreds of supporters gathered in front of a stage at the United Nations Head Quarters, a symbolic place which promotes “civil rights, civil liberties and political freedoms.” 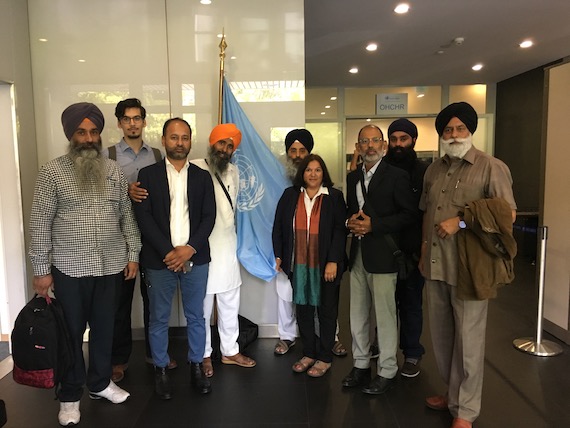 A letter of support from the Prime Minister of Pakistan, Imran Khan was read out by Mr. Afzal Khan. 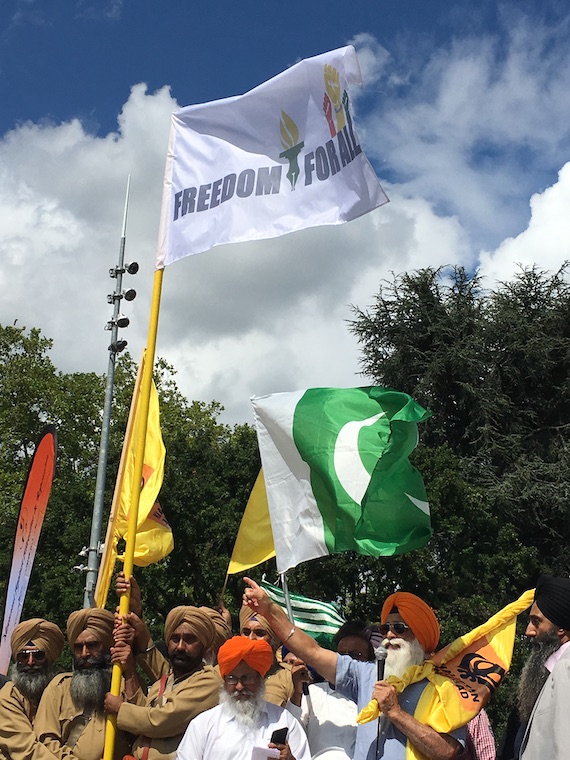 Issues that were raised were the atrocities suffered by minorities in India, the revoking of the special status of Kashmir, political prisoners, torture (Jagtar Singh Johal case) and the violation of freedom of speech through the abuse of sedition laws.

“The United Nations Human Rights officer, acknowledged that India is non compliant and has been non responsive since 1999 and has failed to continue to file reports to the United Nations”, statement by MAAR reads.

Regarding Kashmir, the United Nations are fully informed and continue to monitor the situation closely of Kashmir. The Human Rights officer informed that in July 2019 they updated their Kashmir report.

The second meeting was held with a Human rights officer, in the office of Special Procedures with Gurpreet Singh, Johal (brother of British National Jagtar Johal who is arbitrarily detained India) from Glasgow and Sociologist and Human rights Activist, from Vancouver, Canada, Indira-Natasha Prahst. Updates were provided with the representatives of the case and the continued mental torture.

Discussion of steps on moving forward with the case and what actions can be taken into the future noting the urgency of the matter. The meeting was productive and concluded with forthcoming meetings with Special Rapporteur.

Indira Natasha Prahst said “We gathered to demand the United Nations and Governments to pressure India to abide by International law. It is urgent to illuminate the Human rights violations with impunity and the abuse of sedition laws which fall below international standards which are used as a tool to harass and persecute human rights activists, scholars, journalists and protesters for peacefully exercising their right to freedom of speech and expression. Leadership must be restored with a focus on humanity.”

Gurpreet Singh Johal, brother of Jagtar Singh Johal and solicitor said: “I travelled to Geneva today in unity with the minorities who have and continue to suffer atrocities in India along with raising the awareness of my brother Jagtar Singh Johal who has been detained in India since November 2017. I joined a number of delegates from different minorities to raise the issues they have been subjected to in India with the UN at Geneva. I also attended another meeting with the office of the Special Rapporteur on torture and mistreatment to raise the case of my brother. Both meetings were productive and further actions were discussed. It was also good to see unity between the different minorities who are prepared to stand together to continue to challenge the Indian authorities.”

“Sikhs are seeking UN intervention and the attention of the international community to stop the ongoing violence towards Minorities as the present government led by Mr. Narendra Modi, is controlled and steered by a Hindu outfit – RSS – Rashtriya Sevak Sangh whose main objective is to make India a Hindu Nation. A raft of past human rights violations have been well documented over the years. At the end of the rally, Sikh, Muslim and Kashmiri Speakers from all over Europe expressed their views and raised a Freedom for all flag”, the statement read.