London: One of the items in the Sikh Manifesto that was released in January 2015 was regarding the allocation of a suitable site in central London for a permanent monument to highlight Sikh Efforts in the First World War.

In June 2015 Sadiq Khan in launching his campaign to become Mayor of London reportedly made three specific pledges to the Sikh community that included “I will find a home for a Sikh war memorial in central London.”

During his visit to Sri Darbar Sahib in Amritsar earlier this month he took the opportunity to reaffirm his commitment to create a war memorial in central London. He said “Britain and the world owe a huge debt to the Sikh servicemen and women who fought alongside British troops during the First and Second World Wars.” 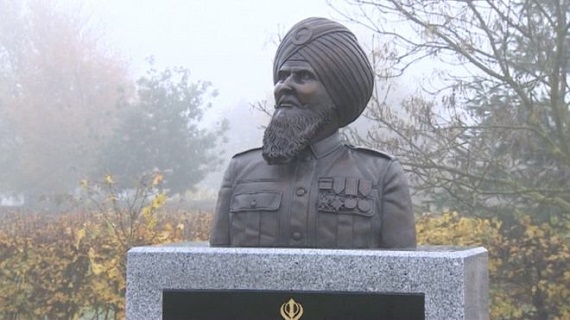 “These brave individuals sacrificed an enormous amount to defend the freedoms that we enjoy today and it is only right that there is a memorial in our capital city to honour the Sikhs who fought to preserve our freedoms.” The All Party Parliamentary Group (APPG) for British Sikhs under the leadership of Rob Marris made this one of its priorities and took this forward following the 2015 General Election.

Following the General Election earlier this year and the reconstitution of the APPG for British Sikhs different members were allocated responsibilities for specific issues.  Tanmanjeet Singh Dhesi took responsibility for taking forward the allocation of a suitable site in central London for a permanent Sikh war memorial.

On 19 December Tanamanjeet Singh tabled Early Day Motion 708 calling upon the Government to “actively support a memorial” dedicated to Sikhs who died  during the World Wars.

EDM 708 has the support of 244 MPs from across the political spectrum, including a number of party leaders from opposition parties: Jeremy Corbyn (Labour), Ian Blackford (SNP), Vince Cable (Liberal Democrats) and Caroline Lucas (Greens).

Furthermore, Bhai Narinderjit Singh, the General Secretary of the Sikh Federation (UK) said ” “In 2015 virtually all candidates standing in the General Election from all political parties backed the need for a permanent monument to highlight Sikh Efforts in the First World War.”

“The Mayor of London responding to the Sikh Manifesto made a specific pledge in June 2015 before he was elected in May 2016 and must deliver on a suitable site in central London for the monument.”

“Ideally the exact site needs to be determined before the 100th anniversary of the end of the First World War,” he adds.