LETTERS TO THE EDITOR:

Apropos to Dr. Jasdev Rai’s views about his talks with Indian Prime Minister Narinder Modi, It is necessary to understand the “structures of domination” of Indian state and other Brahminical forces through which they have been trying to subjugate Sikh nation. For example Indian State used its “Military and coercive domination Machine” for destroying the radical Sikh power structures i.e. militant Sikh organizations, democratic structures like Shiromani Akali Dal (Amritsar), Dal Khalsa etc. Indian State also dominates Sikhs by using co-option and reward technique for example Shiromani Akali Dal (Badal) changed itself from Sikh Party to Punjabi Party, its leaders clearly and openly supports Indian Centralization process through various legal instruments. Indian state further used “the technique of structural control” for determining the distribution of power resources available to Sikhs by using majority controlled Political, economic and social structures. The illegal distribution of Punjab waters is an important example of this type of domination. After successful use of both above mentioned “structures of domination” the Indian state and Hindu forces have been using third dangerous technique of “thought control” as a “strategic of psychosocial dominance” for destruction of every institution, process, sign and symbol of the Sikh identity and nationhood. So called strategic of “talks, dialogue and diplomacy” with Diaspora Sikhs is also an Indian technique to contain Sikh nationalism on foreign soils and also occurred according to the policies of Indian state’s “preservation of its dominance” over Sikh nation.

The above generalization is based on the point that Indian State cannot be able to use its “Military and coercive” and “structural control system” on Diaspora Sikhs living in foreign countries. Thus, She (Indian State) is ‘now’ trying to contain “Sikh activism” on foreign lands through ‘thought control’ strategy. 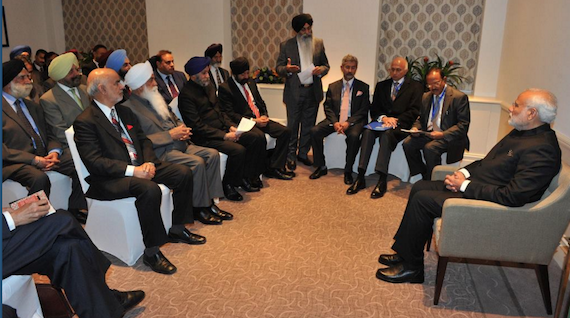 Dr. Rai also gave examples of Ireland, Palestine, Afghani, Sudan and Kashmiri leaders or diplomats successes in United Nations. In this content, the important care in point, is that these leaders and diplomats represented and lead powerful structural political apparatuses. These political apparatuses further possess or represent the feelings of strong group identity, cohesion, motivation, powerful sense of rejection of dominance or subordinate status and above all the “behavioral rejection of subjugation” by the marries of their respective nations.

On the contrary, despite Dr. Rai’s honest initiative to serve ‘nation’ through means of dialogue or diplomacy, he does not possess or represent such type of political power structure of Sikhs. The reality is that the Indian state destroyed such type of “Sikh power Structures” which represent the psychological state of Sikh mind inherent in Sikh scriptures i.e. the “behavioral rejection of the “Bipar” or Hindu subjugation.”

On the other hand, Indian state and Hindu Powers’ continuous use of “thought control “strategies on Sikhs is also the result of the psychological rejection of its domination by a big part of Sikh nation. The issues of Sikh Prisoners, black lists, supremacy of ‘Akal Takht’, implementation of ‘Miri-Piri’ are also represent the psychological state of the Minds of Sikhs. Without considering this ‘state of mind’ one cannot be able to find the solution of Sikh ethnic conflict with Indian State and Hindu power structures.

Dr. Rai’s view that the ‘process of dialogue’ can take years is right but this process need the strong support and back of powerful nationalist Sikh political movement. Without strong political representation of nationalist Sikh power, the process of talks, dialogue or diplomacy should become the tool of “preservation of Hindu dominance” over Sikh nation. It is also clear from the functioning of the Indian state and Hindu organizations in Punjab that they have been in a mood of social and psychological experimentation with regard to above discussed “Sikh State of Mind.” They have already developed a full-fledged “socio-political system” of cultural subordination of Hinduism in the Sikh society in the form of Akali Dal (Badal), “various Sikh Deras” and some ‘Sikh Saints’ etc. In this scenario, It is necessary for Sikh nation to develop as a strong political entity. For this purpose, it is also necessary to start the process of building a strong intellectual Sikh nationalist movement against Indian domination and cultural subjugation of Hinduism. It is my appeal to Dr. Rai and other intellectually conscious Sikhs that they serve “Sikh Nation” better by raising awareness about Indian cultural dominance over the Sikh nation other than this type of futile process of dialogue with cunning Brahminical forces at this stage.