New York/ London: A two days convention is going to be held at New York on March 3 and 4. The convention is being organised by some members of the 15 member coordination committee of the World Sikh Parliament (WSP).

The formation of the World Sikh Parliament (WSP) was announced in August 2017, in Brimingham (England) as a umbrella organisation of the Sikh organisations from all over the world. A “Coordination Committee” comprising of members from different continents was declared to take further steps for its establishment.

As per the organisers of the event the WSP co-ordination committee is holding this event to seek advice, guidance and help for bringing the WSP in existence. 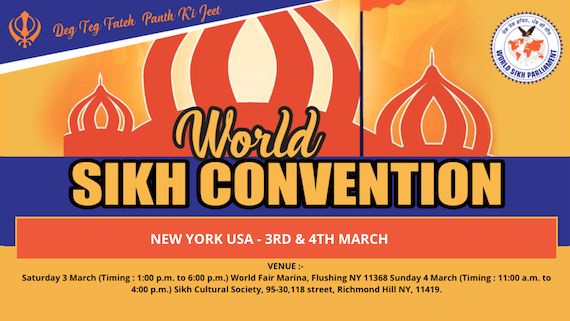 A note published on World Sikh Parliament’s website reads: “Bh. Jagtar Singh Hawara, Jathedar Sri Akal Takhat Sahib who has been constantly trying to forge unity in the Khalsa Panth and many other Gursikhs fully support formation of the WSP. Active Members of Different Sikh organizations including Gurdwara sahibs, high level Panthic officials/intellectuals, and Parliamentarians, from all over the world are expected to attend this convention. This will review progress made about implementation of the commitments made in UK and will examine how effective development or co-operation can be advanced moving forward in the right direction. It will identify the conditions for a successful and timely implementation process and scenarios for the WSP framework enabling a high level discussion involving representatives from Sikh community from all across the globe”.

“Aim of the WSP is to provide authentic guidance to the community on social, political, spiritual and religious matters and to spread the message of universal brotherhood, involving Sikh Institutions/organizations and members of Sikh Community from all over the world with the ultimate object of restoring self-respect and to be independent from the shackles of Hidutva and to establish Khalsa Raj where everyone is considered equal, with no enmity being siblings of the same father-God and every one embraces each other rising above the filth of being high or low, caste system and untouchability”, the note reads further.

One of the organisers told Sikh Siyast News (SSN) that the invitations to the conference are sent to the individuals, Organizations and Gurdwaras all around the world and the participation of at least one Member of each organization or Gurdwara is requested.

Meanwhile, some of the members of the co-ordination committee have expressed their disagreement with the event. In a written statement issued in Punjabi (copy reproduced below), Dabinderjeet Singh, Resham Singh Babar, Gurmeet Singh Khuniyan, Satinderpal Singh, Sukhdev Singh Hairan and Kuldeep Singh Chaheru. In this statement the dissenting leaders, including the members of the coordination committee of the World Sikh Parliament, said that the convention was not held in consultation with the members of the co-ordination of the committee which was not acceptable to them. In this statement they said that a resolution was passed by various Sikh organisations in UK to form World Sikh Parliament which was endorsed by ‘Sarbat Khalsa 2015’. They also maintianed that the process of formation of World Sikh Parliament was at final stage now.

Dr. Amarjeet Singh (Washington) has released a typed version of a letter purportedly written by Bhai Jagtar Singh Hawara from Tihar Jail in New Delhi (copy reproduced below). The letter seeks support for the World Sikh Parliament from all Sikh quarters and further adds that differences with those would be resolved soon, who are in dilemma about WSP due to technical issues.

STATEMENT ISSUED by DISSENTING LEADERS and MEMBERS of the COORDINATION COMMITTEE: