UK: Labour Leadership Make Pitch for Sikh Vote with One Eye on the General Election

Four days before the European elections Jeremy Corbyn, the Labour Leader and John McDonnell, the Shadow Chancellor visited and addressed the Sikh community at Sri Guru Singh Sabha, Park Avenue, Southall to make a pitch for the Sikh vote.

The voter turnout on Thursday for the European elections is expected to be lower than normal with much disillusionment with how the government and all politicians have handled the EU Exit following the 2016 marginal victory for leaving. Many thought we would never have to vote again in the UK to elect Members of the European Parliament (MEPs) that may never take their seats or be lame ducks. 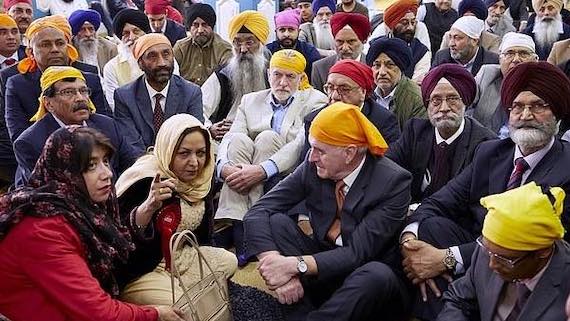 Traditionally the Sikh voter turnout is elections is one of the highest of all communities, so it was not surprising the Labour leadership chose to focus on the Sikh community and covered key issues significant to the Sikh community with one eye on a General Election.

On Thursday the Brexit Party and Liberal Democrats are expected to be the main beneficiaries and the Conservatives the main losers. However, Labour is also expected to suffer with Labour remainers wanting much more clarity from the party leadership about a second referendum and Labour leavers pulling in the opposite direction. 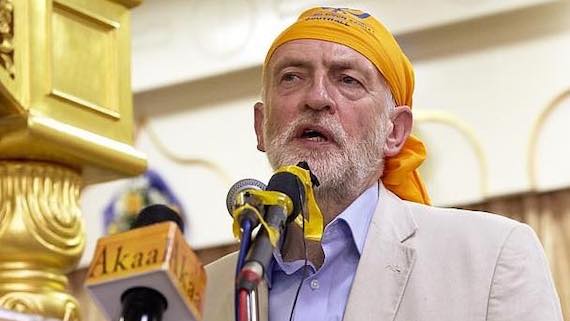 The results on Thursday on the back of the recent local elections are expected to change the political landscape turning many Westminster seats that had previously been viewed as safe seats into marginals. The meltdown of support for the Conservatives with voters punishing them by switching to the Brexit Party and the Liberal Democrats gaining support from Labour and Conservative remainers due to their clear stance on a second referendum will make all parties have to work much harder for votes in the next General Election.

The next General Election may come much sooner than everyone expected. The Prime Minister is being forced to step down within the next few weeks and a caretaker will be appointed. A destructive contest will then begin within the Conservative Party to elect a leader and the next Prime Minister who will almost certainly be unable to keep the warring factions within the Conservative Party together. The Brexit conundrum has created instability and with no easy solution in sight the next General Election may therefore be on the cards within months rather than years.

The Sikh Federation (UK) has already analysed what the opinion polls are suggesting and identified 135 seats in a General Election where the Sikh vote will matter even more with a changed political landscape. John McDonnell therefore announced during the visit today that the Labour leadership will be meeting the main Sikh organisations with grassroots support to help formulate the next Labour manifesto for the General Election.

Harmeet Singh, the young General Secretary at the Gurdwara set the tone for the visit with a brilliant introductory speech covering the Miri-Piri principle, Sikh values and some of the key Sikh demands.

The first political speaker was Dr Onkar Singh Sahota, the only Sikh member of the London Assembly and the Chair of the Labour Party in Ealing Southall. He also gave an excellent speech and covered the three key issues on which the Sikh Federation (UK) had briefed Jeremy Corbyn and John McDonnell.

In January 2015 the Sikh Network working with the Sikh Federation (UK) produced the much acclaimed 10-point Sikh Manifesto that was launched at the same Gurdwara. The Sikh Federation (UK) also set out a 5-point plan before the snap election in 2017, including the need for the UK Government to make a full formal apology for the Amritsar Massacre 100 years ago in 1919 at Jallianwala Bagh.

This was the first issue on which the Sikh Federation (UK) had briefed and reminded the Labour leadership that it had given an assurance that the next Labour Government would make a full apology to the descendants of the victims of the massacre 100 years ago and the worldwide Sikh and Punjabi community. Jeremy Corbyn spoke passionately and repeated his commitment. Many of the Labour politicians that spoke before him touched upon the same issue.

The second issue was the Labour Party manifesto commitment in 2017 to an independent public inquiry into UK involvement in the 1984 Sikh Genocide and anti-Sikh measures taken in the UK by the Thatcher government at the behest of the Indian regime. Reference was made by several speakers to the 35th anniversary of the 1984 Sikh Genocide and a commitment to get to the truth. Jeremy Corbyn has been invited and expected to address tens of thousands of Sikhs who will attend the 1984 Freedom Rally in Trafalgar Square on 2 June.

The third and final issue the Labour leadership was briefed about was also mentioned by Jeremy Corbyn and John McDonnell. It was acknowledged Preet Kaur Gill MP, the first Sikh woman MP was doing an excellent job in getting significant cross-party support to address proper Sikh recognition and the need for a Sikh ethnic tick box in the Census 2021.

Later this week Gurdwaras and Sikh organisations are expected to begin legal proceedings against the Cabinet Office if they fail to agree to provide the option of a Sikh ethnic tick box when the Census Order is presented in Parliament in the Autumn. The legal challenge will emphasise the need to address equal opportunities and anti-discrimination as regards the Sikh community and highlight institutional discrimination by public bodies against the Sikh community.

“We are delighted the Labour leadership is much more responsive to the demands of the Sikh community and wants our assistance to develop the next Labour manifesto.”

“However, no one can take the Sikh vote for granted that will matter much more in the next General Election with a changed political landscape due to massive divisions created by Brexit.”