Reports in Indian media claim that the Gumbads (domes) of Gurdwara Darbar Sahib, Kartarpur Sahib fell due to a wind storm two days back.

The information was initially shared by a journalist, Ravinder Singh Robin over twitter when he posted four photographs of fallen domes and established that these were domes of Gurdwara Darbar Sahib, Kartarpur Sahib.

“Temporary material for Gurudwaras in Pakistan?? Two domes of recently renovated #GurdwaraDarbarSahib, #KartapurSahib fell during overnight rain and strong winds. The domes were not constructed with cement and iron but fiber”. (sic)

Temporary material for Gurudwaras in Pakistan?? Two domes of recently renovated #GurdwaraDarbarSahib, #KartapurSahib fell during overnight rain and strong winds. The domes were not constructed with cement and iron but fiber. pic.twitter.com/2eg1uLIE2A

Tweeting a link of news by a news portal he wrote:

Notably, these tweets what he said clearly meant that the Gurdwara Darbar Sahib, Kartarpur Sahib building has suffered damage.

BUT WHAT PHOTOGRAPHS REVEAL:

Here are some of the photographs that have emerged over social media and used by Indian media:- 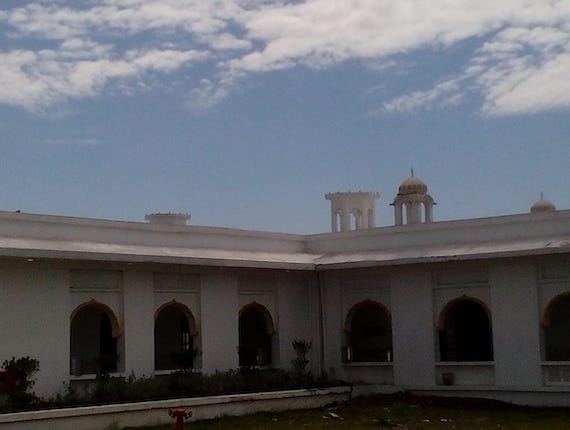 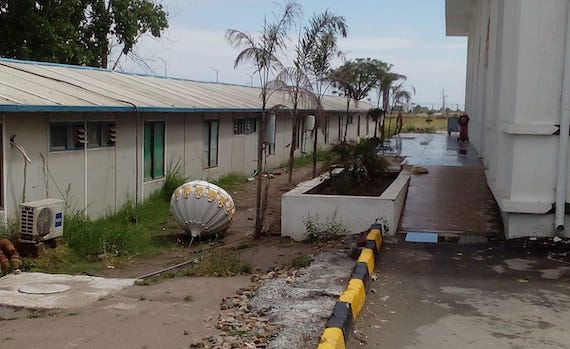 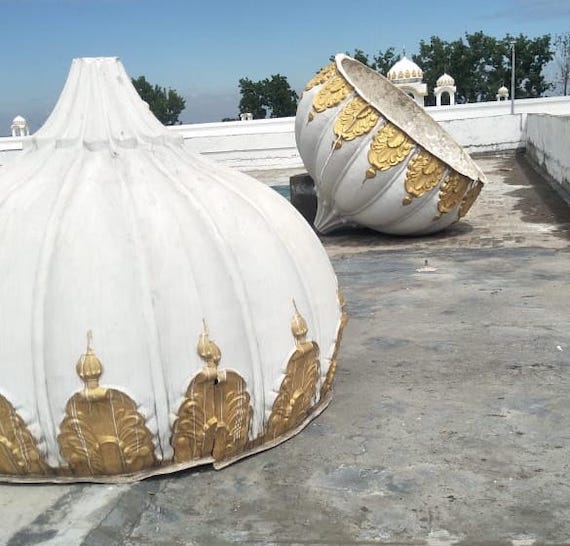 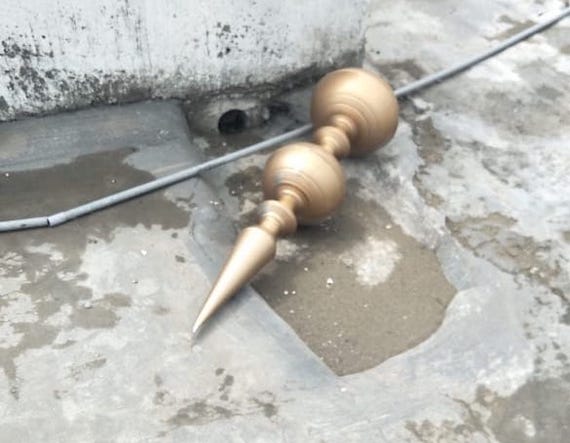 The photographs, however, themselves indicate that these domes were not that of the Gurdwara Darbar Sahib, Kartarpur Sahib. 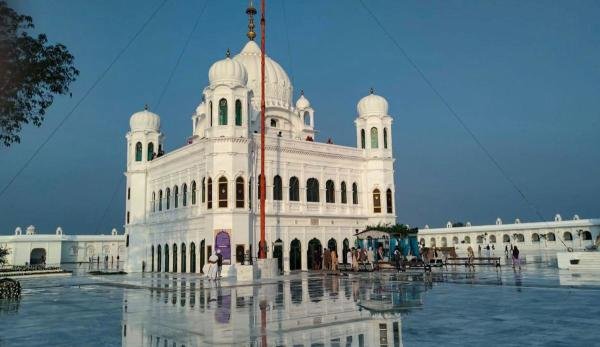 During Sikh Siyasat News (SSN) Team’s visit to Gurdwar Kartarpur Sahib, it was noticed that the Gumbad of Gurdwara Sahib was built with the material of which the building itself was built. The Gumbads in pictures were clearly superficial. Therefore, Sikh Siyasat News suspected that these Gumbads may have been installed at newly built corner minars etc. of the new Parikarma and new buildings built near Gurdwara Darbar Sahib, Kartarpur Sahib.

These does not seem to be Gumbads (domes) of Gurdwara Sahib. I visited Kartarpur Sahib and Gurdwara Sahib has only 1 Gumbad and that is part if the building. These domes seem be of part of corner attaris build in Parikarma. There is difference. @rsrobin1 kindly clarify.

NO DAMAGE AT ALL TO GURDWARA KARTARPUR SAHIB: CONFIRMS HEAD GRANTHI 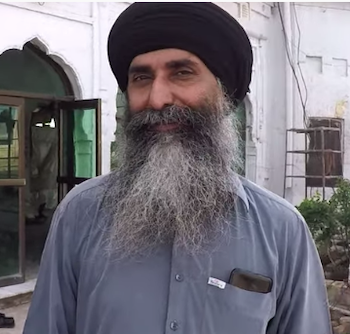 In order to get first hand information, the Sikh Siyasat News talked to Bhai Gobind Singh, Head Granthi of Gurdwara Darbar Sahib, Kartarpur Sahib and he confirmed that the Gurdwara Sahib’s building- including its Gumbads are intact, and suffered no harm of any sort.

He said that a few domes that were affixed over the newly build Parikarma and other new buildings fell due to wind-storm (as guessed prima-facie by us) but re-stressed that there was no damage to Gurdwara Sahib’s building or Gumbad.

While talking to the SSN, Dr. Pritpal Singh of American Gurdwara Prabandhak Committee (AGPC) said that he has talked to various persons in Pakistan and Kartarpur Sahib and they all confirmed that the Gurdwara Sahib’s building was intact and had suffered no harm, and few domes that were affixed over the newly build Parikarma and other new buildings fell due to wind-storm

WHAT REPORTS in INDIAN MEDIA SAY – A BREIF ANALYSIS:

Sikh Siyasat News (SSN) has briefly analysed some of the reports in Indian media. This does not cover the complete analysis of all the reports in Indian media published on this matter, rather it is an attempt to analyse and highlight various shades of reporting, which in one way or another are resulting in imparting incorrect and misleading information, or leaving an improper impression because of incomplete information.

Here is a brief analysis of reports in Indian Media:-

While referring to the tweet of journalist Ravinder Singh Robin, Indiablooms titled it’s news as “Domes of Kartarpur Sahib Gurudwara built by Pakistan fall after overnight rain within months of construction”.

The news-story reads: “Within six months of renovation of Gurudwara Kartarpur Sahib and its subsequent opening for the Indian pilgrims, mainly Sikhs, the poor quality of construction done by the Pakistani authorities has been exposed by overnight rain and strong winds as the domes fell down, prompting critics to call the Kartarpur exercise a political stunt for Prime Minister Imran Khan.”

“The damage to one of the most revered pilgrimage sites of the Sikhs has left the community in shock. Clearly, the efficiency behind quick and time bound renovation of Gurdwara Darbar Sahib, Kartapur Sahib ahead of opening of Kartarpur Corridor by Pakistan army was exposed”, the report reads further.

Notably, this report claimed that “the damage to one of the most revered pilgrimage sites of the Sikhs has left the community in shock” at a time when most of the Sikh community was not even aware of the issue.

Notably, there was not even a single line statement (when last accessed by SSN) from any Sikh leader in this report.

This is a totally biased and propaganda story.

Notably, this story was tweeted by journalist Ravinder Singh Robin with the comment that “Domes of Kartarpur Sahib Gurudwara built by Pakistan fall after overnight rain within months of construction”.

The headline of a report published by Hindustan Times Punjabi says: “4 Fiber-Gumbads of Kartarpur Sahib Gurughar Fell Due to Wind-storm”.

Two initial lines of HT Punjabi report says: “Four Gumbads of Sri Darbar Sahib Gurdwara Sahib that was opened for Darshans though Kartarpur Sahib corridor about five months ago, fell down due to a wind storm on Friday. After which criticism of Pakistan’s Imran Khan government has started globally”. 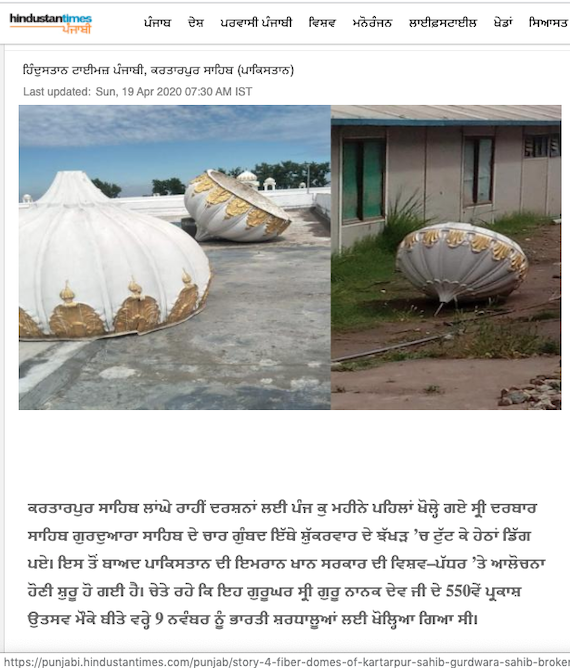 A SCREENSHOT OF A PART OF REPORT PUBLISHED BY HT PUNJABI 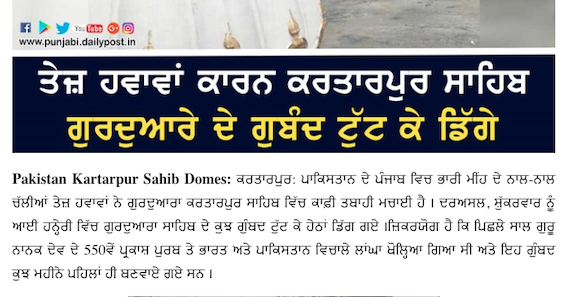 A SCREENSHOT OF A PART OF REPORT PUBLISHED BY DAILY POST

Here are three screenshots of parts of report published by JagBani:- 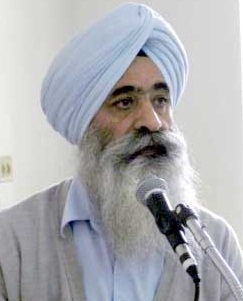 AGPC leader Dr. Pritpal Singh said that Gumbad of Gurdwara Sahib and domes of minars etc. are not the same thing and it was totally wrong to refer to such other domes as Gumbad/dome of Gurdwara Sahib.

While referring to reports in Indian media saying that Gumbad/dome of Gurdara Darbar Sahib, Kartarpur Sahib has fallen in a windstorm, Dr. Pargat Singh said that the AGPC condemns such misleading attempts.

Bhai Gobind Singh said that few domes affixed to newly build Parikarma and other new buildings fell due to wind-storm and those are duly fixed again. He said that soon after learning about the damage to domes of new buildings, the authorities swung into action and promptly fixed the fallen domes.