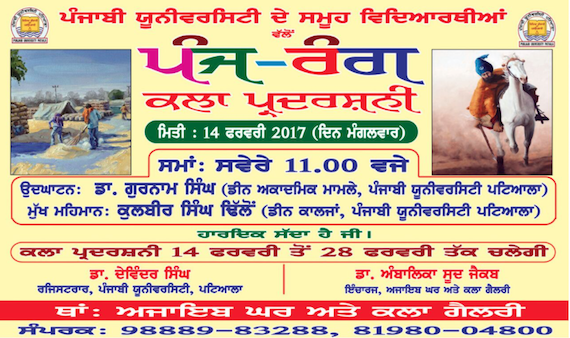 Arts Gallery and Museum is going to hold an Arts Exhibition titled as "Panj Rang" for two weeks- from February 14 to 28.

‘Hazarey Wala Munda’, a compilation of eight melodious tracks by Satinder Sartaa was released on 18th March 2016 at Chandigarh. The album under the label of Shemaroo Entertainment Ltd.

12th edition of Khalsai Khed Utsav started off with much fervor and enthusiasm at the Sri Guru Granth Sahib World University, Fatehgarh Sahib under the guidance of Vice Chancellor, Dr Gurmohan Singh Walia.

Shiromani Gurdwara Prabandhak Committee has announced you to hold a World Punjabi Conference at Fatehgarh Sahib in October.

Amritsar, Punjab (August 31, 2014): Guru Nanak Dev University (GNDU) Amritsar is going to organize its' inter-college Gatka tournament at university campus grounds on September 5. The opening ceremony will be held at 9 am. All men and women Gatka teams from various colleges affiliated with GNDU could take part in this martial art event.

Two days Punjab state Gatka Championship (men & women) at Machhiwara (Ludhiana) begun on Agusut 16. About 500 Gatka players from 17 districts' teams are participating in this tournament under 14, 17, 19, 22 and 25 years events in single soti, farri-soti and weapons demonstration. 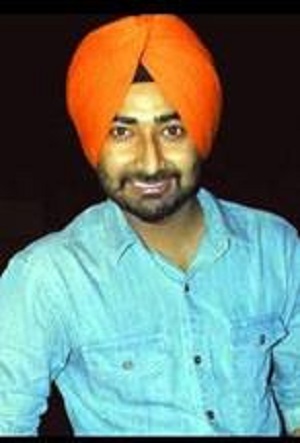 Vulgarity in Punjabi songs has started to catch attention of audience and with the 'power' of social-media the listeners are getting their resentment noticed.

Canada: April to be observed as Sikh Heritage Month

Ontario, Canada (March 30, 2014): April will from now on be recognized as Sikh Heritage Month. Bill 52 approved in the Ontario Legislature in December was introduced by Brampton New Democrat MPP Jagmeet Singh last April.

Pakistan (February 17, 2014): It is learnt that Pakistan Sikh leaders has been holding meeting with the Pakistan leadership, including the so-called 'hardliners', to save the two Sikh who were abducted near Deraban area of Dera Ismail Khan last week.

Patiala, Punjab (January 24, 2014): As per information available with the Sikh Siyasat News (SSN), the Punjabi University, Patiala is going to launch Punjabi encyclopaedia – Punjabipedia next week. Punjabi University is aiming to promote Punjabi language through this project.

Amritsar, Punjab (July 11, 2013): As per information the "Amritsar Sthapana Diwas" (Amritsar Foundation Day) was celebrated with much enthusiasm over a three day period by Eco-Amritsar, an initiative of Washington-based EcoSikh, and its partner organizations. Hundreds of people participated in several separate events organized all over the city by various stakeholders, including religious programs, art shows by city artists, educational seminar and marches by Gurdwaras and several organizations.

Chandigarh/ Punjab (July 08, 2013): It is learnt that the Punjab and Haryana High Court has dismissed the petition of suspended Sub-Inspector (SI) Surjeet Singh. SI Surjeet Singh has disclosed that he was part of mass human rights abuses in Punjab during early-mid-1990s and killed 83 innocent Sikhs at the orders of his superior – Paramjeet Singh Gill (SSP) – who is now posted at Ludhiana as police commissioner.

Chandigarh (April 25, 2013): According to certain media reports the Punjab and Haryana high court on April 25, 2013 ordered Punjabi rapper-cum-singer Honey Singh to present himself before the court on May 14, 2013 to respond to the allegations levelled against him for singing a song 'Main Hoon Balatkari' (I am a rapist). 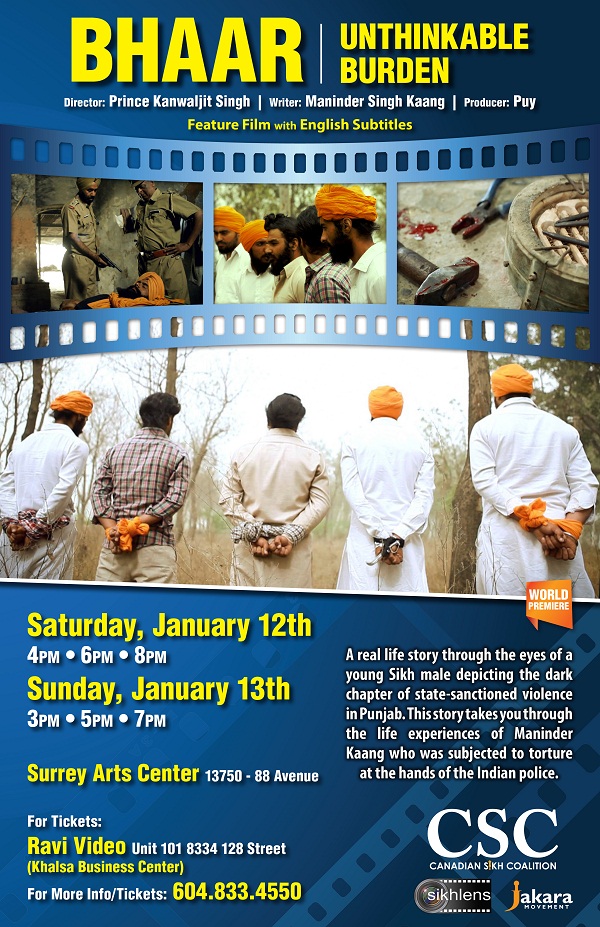 First screening of Bhaar – the unthinkable burden to take place in Surrey, BC on March 23 & 24

Toronto, Canada (March 13, 2013): The Canadian Sikh Coalition (CSC) presents the Toronto screening of Bhaar - a film on the real life story of a young Sikh male who was subjected to torture by the Indian police. Through the eyes of one man's experiences, this film provides insight into the complex political and social atmosphere of Punjab in the 1980s.