The Sikh Manifesto (2020-2025) was showcased at the Sikh Federation (UK) Convention at the weekend at Guru Nanak Gurdwara, Smethwick.

The revised Sikh Manifesto is being finalised by the Sikh Network after taking account of feedback from the community, achievements and progress over the last 5 years and new challenges and opportunities. 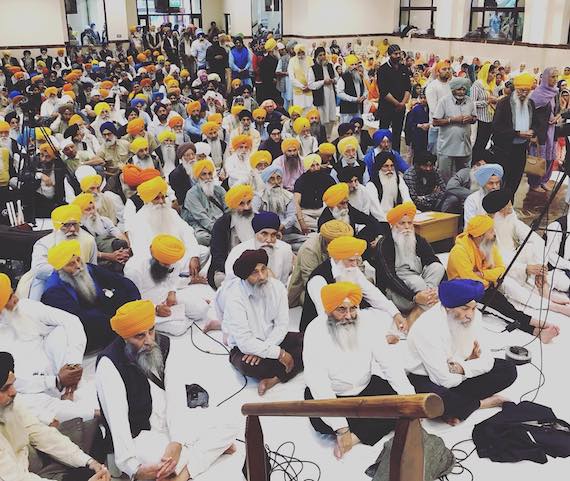 A view of Annual Convention of Sikh Federation UK (2019)

The Sikh Manifesto (2015-2020) was first published and launched in January 2015 at Sri Guru Singh Sabha, Havelock Road, Southall. The Sikh Network with the support of the Sikh Federation (UK), Gurdwaras and other Sikh organisations is expected to organise two launch events, one at a prominent Gurdwara and the other in Parliament.

Thousands of Sikhs from across the UK that gathered for the Convention at the weekend were told a constant and central focus would remain on More effective representation in Parliament on Sikh issues – the first item in the Sikh Manifesto.

The Sikh Federation (UK) confirmed it will do all it can to ensure the two exiting Panthic-minded Sikh MPs are selected to stand for Labour and elected again. Labour Party members in Ilford South would also be encouraged to select Jasbir Singh Athwal (Jas Athwal) as the Prospective Parliamentary Candidate (PPC) in three weeks.

Jas is not only another Panthic-minded Sikh, but a person dedicated to serve his constituents where he has lived and worked for his entire life. The Labour PPC in Ilford South would be defending one of Labour’s safest seats with a massive majority of nearly 32,000.

Bhai Amrik Singh, the Chair of the Sikh Federation (UK) said: “Jas Athwal has proved to be an exceptional Council leader in Redbridge and is an excellent local candidate with a proven track record.”

“We have every confidence the overwhelming majority of Labour Party members in Ilford South will support Jas Athwal as he is the best candidate.”

“Labour needs to be alive to criticism of parachuting someone into a safe Labour seat to oppose Jas Athwal in a constituency that has a massive BAME vote.”

The Sikh Federation (UK) confirmed it had identified 135 constituencies that have 1,000 or more Sikh constituents where local Sikhs would be encouraged to ensure PPCs from these areas make commitments and the MPs elected do much more on Sikh issues, including supporting the All Party Parliamentary Group (APPG) for British Sikhs. 70 of the constituencies are currently held by Labour, 50 by the Conservatives and 15 by other political parties indicating the relevance of the Sikh Manifesto to all political parties.

Those at the Convention were told several items in the existing Sikh Manifesto could be achieved in the short term i.e. next 12 months, including the option of a Sikh ethnic tick box in the Census 2021, the Code of Practice on the 5 Kakaars and Dastaar that is already in draft and if a Labour Government was to come to power the independent judge-led public inquiry could commence on UK involvement in the 1984 Sikh Genocide and anti-Sikh measures against Sikhs in the UK. However, the focus of some of the items in the revised Sikh Manifesto could change to practical implementation i.e. encouraging the immediate collection by public bodies of monitoring data on Sikhs.

Two or three items were likely to be replaced, significantly amended or incorporated elsewhere, such as securing a site in central London to recognise Sikh sacrifices in the World Wars as sufficient progress had been made on securing a site. In addition, the Lions of the Great War monument had already been established in Smethwick and a Remembrance Garden opened in Bristol. Sites in Leicester and Huddersfield had also been secured for monuments.

New items concerning hate crimes targeting Sikhs and our institutions, campaign to secure the release of Jagtar Singh Johal and an apology from the British Prime Minister for the Jallianwala Bagh massacre would be incorporated.

It was made clear at the Convention that some of the issues in the Sikh Manifesto required international co-ordination and a global approach. For example, securing a UN-led inquiry into the 1984 Sikh Genocide and the Sikhs’ right to self- determination required campaigning and lobbying across the globe. Therefore, in a separate but related initiative a shorter document that will be available in serval languages can be used by Sikh organisations, Gurdwaras and individual Sikhs in the Diaspora across the globe is to be developed and released in January 2020. Further details will be given by the Sikh Federation (UK) at an international event in Paris on Sunday 22 September 2019.