SLF and NSYF are going to host an event at Norwood Hall, Southall (UB2 4LA) on July 28. Moninder Singh, SLF leader and president of Dashmesh Darbar Gurdwara Sahib in Surrey (Canada), Prabhjot Singh (SLF) and Shamsher Singh (NSYF) will share their views during this event. 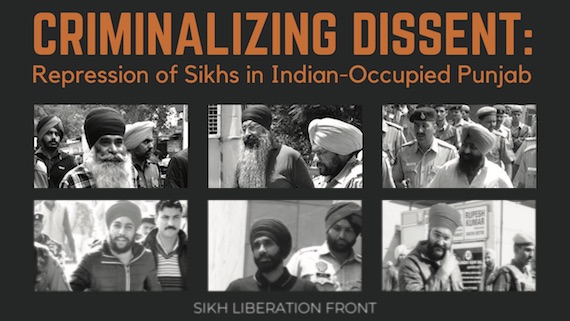 Image used for representative purpose | a portion of title page of the report.

This report that was earlier released in Edmonton (Canada), seeks to place the recent arrests of Sikh activists in the context of the Indian state’s ongoing efforts to criminalize Sikh dissent and eliminate Sikh sovereignty from public discourse, said SLF and NSYF.

In a brief note about the report, the Sikh youth groups said: “After the Sikh genocide between 1984-1995, to quell the armed Sikh liberation movement for a separate state, Khalistan, the report illustrates how the Indian state continues to use its judicial and coercive security apparatus to criminalize and repress Sikh political dissent and expression. The authors show that the enforced peace since the decline of the armed insurgency is maintained not through political settlement, but by maintaining the omnipresence of repressive state violence—and making it felt by potential Sikh dissidents”.

Based on meticulous research, the report uncovers that between April 16—December 1, 2017 alone, the Indian state has arrested at least 52 Sikh youth, accused of various purported acts of “sedition and terror” under draconian measures of the [Unlawful Activities Prevention Act] and Indian Penal Code, the note reads.

“Those arrested are dominantly young Sikh men, active in democratically organizing their communities to advocate for an independent Khalistan. A significant proportion of them explicitly arrested for engaging and promoting discussions on Sikh sovereignty over social media”.

Despite these brutal conditions, voices of Sikh dissent continue to resist the repression of Indian security forces, maintains the SLF while adding that “[w]ith various mass mobilizations in the past 5 years, a new generation of Sikh activists continues to claim its right to political dissent and sovereignty”.

This resurgence is a strong indication of the simmering discontent, particularly due to the closing of political space for Sikh dissent. These developments clearly illustrate the lack of closure to Sikh demands for self-determination and the ongoing nature of this political conflict, reads the SLF statement.

Note: The report is available to Sikh naujawaan by emailing [email protected]. The Gurmukhi version of the report will be released in the very near future.