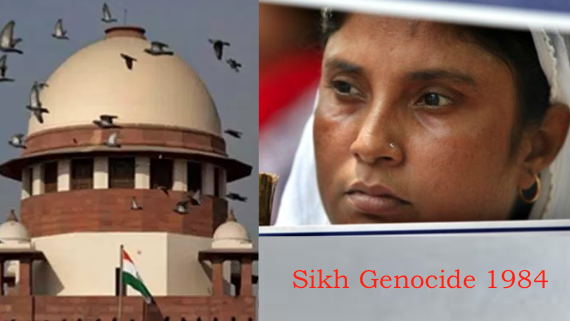 Thanking Manjit Singh G. K. for releasing this video, Advocate H. S. Phoolka said that the CBI should investigate the video clips and Jagdish Tytler should be arrested for interrogation.

One of the earliest allegations of Congress complicity was published in The New York Times on November 4. The article, filed the day before by Barbara Crossette

Around 33 years after Sikh genocide of November 1984, a handful of Sikh families from Gurgaon have for the first time approached the Punjab and Haryana

It is learnt that Sheela Kaur, a 1984 Sikh genocide survivor on Monday deposed in a Delhi Court against Congress leader and accuse in the November 1984

Genocide Denial: Punjab Minister says to Congress was not Responsible for 1984 Sikh Carnage

Scholars have found that every genocide followed by denial and according to genocide scholar Gregory H. Stanton denial is a multi-layered and multi-form process which covers numerous attempts to deny the fact of genocide.

Justice Dhingra Appointed Head Of Yet Another SIT Formed By SCI, To Re-Investigate Sikh Genocide Cases

1984 Sikh Genocide: Indian Supreme Court to Set up Another SIT to look into closure of 186 cases

The Supreme Court of India today stated that it would set up a fresh three-member Special Investigation Team (SIT) to look into 186 cases related to November 1984 killings of the Sikhs in which investigations were closed.

Seen as yet another judicial stunt, the Supreme Court of India (SCI) here today reportedly said that it would constitute a fresh three-member SIT,

Sikh Genocide 1984: 2 Witnesses From US Ready To Testify Against Jagdish Tytler

The Sikh genocide of November 1984, that took place on the pretext of former Indian Prime Minister Indira Gandhi's killing that claimed the lives of an

After a 33 years long slumber the Delhi High Court (DHC) on Monday, asked for the statements of the persons alleging Congress leader Sajjan Kumar's role

As per the media reports the lie detector test of arms dealer Abhishek Verma, a key witness in the November 1984 Sikh genocide has been postponed