Farmers in India and the Fundamental Right to Protest: International Human Rights Day 2020 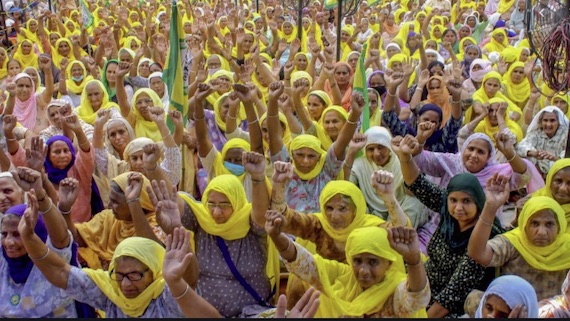 Weeks of protests by farmers from Punjab and Haryana intensified against three controversial farming laws which abolish Minimum Support Pricing (MSP) for farmers, led to a call for protestors to make their way to the national capital Delhi. On the 8th of December the protests had spread with farmers across India leading a country wide strike and shut down (band). Many of these poor and marginalised farmers, battled against the onset of winter amidst a world-wide pandemic travelling the 500km by foot, on tractors, scooters and other vehicles.

Farmers peaceful protest on the borders of Delhi has been catching attention and solidarity of the global community. Foreign officials and people's movements are expressing their solidarity and support for farmers who are calling for roll back of Indian government's new farm laws.

In a series of ongoing daily peaceful protest advocates of Punjab and Haryana High Court under the banner of Lawyers in Solidarity with Farmers (LSF) showed solidarity with the farmers against the three Farm Laws passed by Parliament.

In an advisory released on December 4m the Editors Guild of India (EGI) has expressed concerns about the news coverage of the farmers' protests in the India’s capital, wherein certain sections of the media have been labelling them as “Khalistanis”, “ anti-nationals”, and other such terms to “delegitimise the protests without any evidence or proof”.

The National Farmers Union of Canada has expressed solidarity with farmers in India, who continue to protest new agricultural laws formally passed in September.

A group of 36 cross-party Parliamentarians have written to UK Foreign Secretary Dominic Raab and asked him to make representations to his Indian counterpart, S Jaishankar, regarding the impact on British Punjabis affected by the demonstrations by farmers against new agricultural legislation in India.

While Indian government is terming the farmers protests and use of force against peacefully demonstrating protesters as its "internal matter", the spokesperson for UN chief Antonio Guterres and a group of 36 cross-party UK parliamentarians have also come out in support of the agitating Indian farmers, saying that people have a right to demonstrate peacefully and authorities should let them do so.

Punjab's Subedari Nizam (state government) has announced to impose night curfew in the state citing rising cases of corona virus. As per media reports the government has also declared those not wearing masks in public will be charged with fine of rupees one thousand.

How Present Farmers’ Struggle is Different From Previous Agitations? & Why We Need For Punjab Centric Agrarian Model?

A discussion was organized at Teachers Home, Bathinda on 19 November 2020. The top of this discussion was "Punjab Centric Agrarian Model". Speaking during this event farmers' leader S. Megh Raj Singh Bhai Mandhir Singh explained that how present farmers' struggle was different from previous farmers' agitations and why there was a need for Punjab centric agrarian model.

Participating in the farmers’ stir against contentious farm laws on November 5, the Dal Khalsa warned the Narendra Modi Government for pushing Punjab to the wall.

BJP led government in Haryana reportedly granted Gurmeet Ram Rahim a day’s parole on October 24. Gurmeet Ram Rahim is head of Dera Sauda Sirsa and is undergoing jail after he was convicted by a special CBI court for murder and rape.

A trial court in Amritsar acquitted all six persons under UAPA in a 2017 case. The case was registered under Arms Act, Foreigners Act, Explosives Act and UAPA in May 2017.

The preamble of this act says that this bill is "to amend the Code of Civil Procedure, 1908 to provide for protection to the farmers from attachment of land as a consequence of the farming agreements to safeguard his livelihood".

As per The Farmers Produce Trade and Commerce Special Provisions and Punjab Amendment Bill no sale of paddy and wheat in Punjab will be valid unless it is paid equal to or over MSP. Imprisonment of three years and a fine in case anybody compells a farmer to sell his agricultural produce below MSP.