China Has Deployed 60,000 Soldiers at LAC; India Needs US in This Fight: says Mike Pompeo 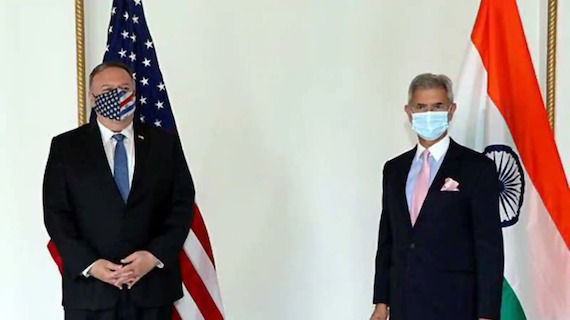 United States Secretary of State Mike Pompeo said the country has deployed 60,000 soldiers at its border with India. He also said India “absolutely need the United States to be their ally and partner in this fight”.

As farmers’ dharna on the Amritsar-Delhi railway tacks completed 14 days on Wednesday, many protesters recalled how they had sat at the same track for seven weeks in 2016 to push state government to pursue better marketing of Punjab Basmati in Iran and other middle eastern countries. They also rued that due to diplomatic reasons, Punjab was not able to fully realise the potential of trading its agri-products through the Wagah border.

Dal Khalsa slams the Indian government for stoking the climate of fear psychosis through “terror tactics” compelling Amnesty International India to shut down its services in the country.

Struggle Should Be For Right To Price Determination, Direct International Trade and Right over Natural Resources: A Joint Statement

More than thirty activists, opinionists, professionals, farmers have issued a joint statement on Farmers' struggle putting forward a viewpoint that instead of merely reacting on issues, the conditions which create these issues must be addressed.

The complete freezing of Amnesty International India’s bank accounts by the Government of India which it came to know on 10 September 2020, brings all the work being done by the organization to a grinding halt. The organisation has been compelled to let go of staff in India and pause all its ongoing campaign and research work. This is latest in the incessant witch-hunt of human rights organizations by the Government of India over unfounded and motivated allegations, Amnesty International India said today.

Caught in a complex situation Shiromani Akali Dal (Badal) has attempted to save its face on agriculture ordinances issue by tendering resignation of Harsimrat Kaur Badal from the Union Cabinet. SAD (B), a political ally of BJP, was given cabinet berth in BJP led Union government.

SCI Stays Sumedh Saini’s Arrest; Judge Asks Why There is Hurry to Arrest Him?

A petition moved by former DGP and murder accused Sumedh Saini is listed for hearing in the Indian Supreme Court for Tuesday (September 15). Sumedh Saini has been hiding to avoid his arrest after his anticipatory bail petition is dismissed by the Punjab and Haryana High Court in Balwant Singh Multani murder case.

Punjab's former DGP Sumedh Saini is booked for custodial torture and murder of a Sikh youth Balwant Singh Multani in 1991. After his anticipatory bail is rejected by Punjab and Haryana High Court, Sumedh Saini has applied for bail in Supreme Court of India (SCI).

Tensions Escalate at China-India LAC: Both Sides Fire Shots, Accuse Each Other

The situation at China-India Line of Actual Control (LAC) is turning serious as both sides have fired gunshots in recent days.

China-India Accuse Each Other of Border Violations; Tensions Rise, Talks On

Tensions between China and India again have flared up again, with both Asian powers accusing each other of trying to seize territory across their disputed Himalayan border which is called 'Line of Actual Control (LAC)'.

While addressing the Indian-American community on August 15, marked as Independence Day by India, Democratic US presidential nominee Joe Biden said that if elected, he would stand with New Delhi in confronting the threats it faces.

A number of Sikh, Bahujan and Muslim activists held a joint protest at Jalandhar on August 15, which is marked annually as independence day by the Indian state. It is learnt that activists belonging to Dal Khalsa, Shiromani Akali Dal Amritsar (Mann), Rashtriya Muslim Morcha, Bhaujan Kranti Morcha, Sikh Youth Federation Bhindrawale (SYFB) and Akal Federation participated in this protest.

China owned and flagged vessels have been barred from bidding on tenders for chartering tankers to import crude oil and petroleum productions or to export oil products such as diesel out of the India.

The complexities of developing equations between China and India are increasing in various spheres. Public opinion is one such sphere. In a survey 72 per cent said they believe India could win in a war against China.

China and India are two key players in South-Asian Geopolitics. The militaries of both powers were engaged in a standoff in Eastern Ladakh recently. Though both sides jointly declared to disengage and deescalate in mid-July, there has been little progress in deescalation along the disputed Line of Actual Control.

Backed by the Bhartiya Janta Party (BJP) led Union government of India and pro-Hindutva groups like RSS, Ram Janambhoomi Teerth Kshetra (trust) is going to hold 'bhoomi poojan' at Ayodhya to lay foundation of new temple for lord Ram. The trust has invited Sikh leaders, including acting Jathedar of Akal Takht Sahib, Giani Harpreet Singh. There has been discussion in various Sikh and political circles that whether or not would Giani Harpreet Singh participate in the said event on August 5.