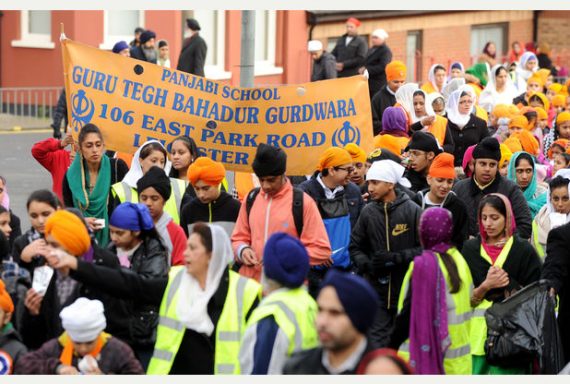 Almost 10000 Sikhs are expected to attend the annual Nagar Kirtan procession, which will be making its way through the city today.

In a memorandum to the SGPC Chief Kirpal Singh Badungar the parents of Bhai Ravinder Singh (Nakodhar Goli Kand) Bapu Baldev Singh and Mata Baldeep Kaur, have reminded him that on Feb. 02, 2011 the then Jathedar of Akal Takht Sahib

While terming the India’s republic day as betrayal day for Sikhs, the Dal Khalsa along with its alliance partner Panch Pardhani has decided to organize public rally at Amritsar on Jan 25 to protest against “Injustices and Intolerance".

The biggest and naked lie of the recent years is that octogenarian Akali leader Parkash Singh Badal and his government has never interfered in affairs of the SGPC and the Akal Takhat. Stating this, Dal Khalsa spokesperson Kanwar Pal Singh said he hasn’t seen a bigger liar than Senior Badal in his 18 years of political life.

Taking a dig at the SGPC for making complete turnabout on Nanakshahi calendar, the Dal Khalsa today questioned the wisdom of the SAD and SGPC leadership for backtracking from the issue that's core of the struggle to uphold the Sikh's distinct identity.

Condemning the dismissal of Panj Piyare's by the SGPC executive, the Dal Khalsa and SAD Panch Pardani said it was engineered by Badals only to satisfy their ego and arrogance.

Hoshiarpur: Hitting out at political chicanery of Badals, the Dal Khalsa today ridicules the non-functioning and non-performance of one-man judicial commission formed by Akali government to dig out the truth behind the sacrilege incidents terming it's formation as eyewash meant only to cool the tempers of hurt Sikh sangat.

Dal Khalsa and its alliance partner SAD (Panch Pardani) hits out at the Akali led Punjab government for failing to discharge its constitutional duty in arresting the guilty cops under murder charges who ordered the firing on Sikh protesters that resulted in killing of two Sikhs in Faridkot district.

Chandigarh: The Shiromani Gurdwara Prabhandak Committee (SGPC) chief Avtar Singh Makkar seems to have caught into another fix has SGPC executive was divided over supporting ...

Hoshiarpur: The Decision of five Takhat Jathedars to roll back their earlier edict of Pardoning the DeraÂ Sauda is historic and victory of collective will ...

The Sikh Research Institute (SikhRI) has announced the introduction of the Gurduara Governance Program, a one day training session aimed at current and prospective Gurduara boards, management, and decision makers.

DSGMC that the Indian government has denied to extend the details of "black list" of Sikhs and Modi Sarkar was acting like Congress party governments.

SGPC has announced to reconstitute the Sikh History Research Board and increasing its membership. SGPC media secretary Daljit Singh Bedi recently announced that five new members will be added to the board.

A team of SGPC led by Karnail Singh Panjoli visited Mastuana on July 12 to inspect a building that was being constructed to look-alike the Darbar Sahib, Amritsar.